A peaceful city full of friendly deer walking freely like in a Disney movie. That’s what many people imagine when they think about Nara. But Nara City has way more to offer its visitors. And in this article, we’ll tell you what makes it unique and why you should include it in your Japan travel itinerary.

Located in the Kansai region (Kansaiken 関西圏), Nara City has a deep religious and cultural background and is a perfect travel destination when you visit Japan. Unfortunately, it’s often overshadowed by more famous neighbors – Kyoto or Osaka. But we believe that Nara’s magnificent architecture, divine nature, and delicious food will turn your trip into an exciting adventure.

Read more about the Kansai Japan and what makes it so unique here.

A brief history of Nara City

Founded in 710 AD, Nara was Japan’s first ancient capital. It was a diversified city that adopted multiple traditions from China and Korea. One of those ideas was Buddhism which quickly spread all over the country and became the primary religion in Japan.

But despite the increasing power of Buddhism, local Shintoism didn’t disappear. When you stroll through Nara City, you’ll notice how Buddhist temples harmonise perfectly with Shinto shrines. That’s the same harmony that existed between two religions back then.

In 794 AD, Kyoto became the new capital. The Nara Period was over, but it left an abundance of cultural heritage that we still appreciate.

Things to do in Nara City

Nara City has the most extensive number of UNESCO World Heritage Sights in the country. And, despite its small size, it has absolutely unmissable sightseeing spots! If you’re wondering what to do when you visit Nara, here is a list of fantastic places you shouldn’t miss. 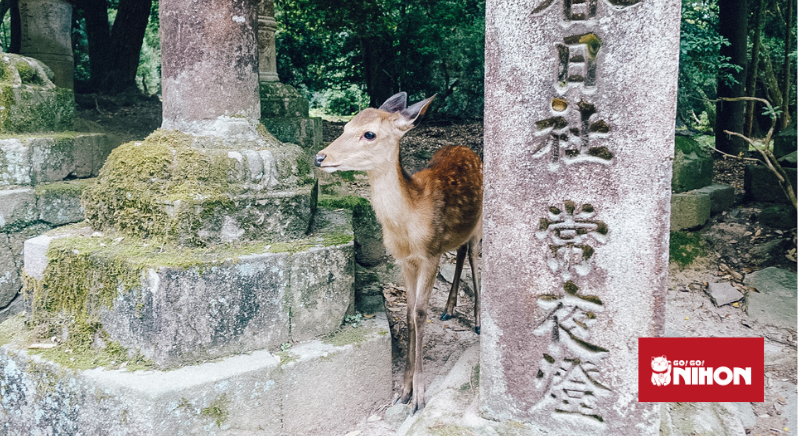 Start your adventure with the most popular tourist attraction of the city – Nara Park. Free-roaming Nara deer aren’t afraid of people, and you can easily see them walking on the streets, pedestrian lanes, and sometimes even poping in a grocery store or cafeteria.

According to the Shinto religion, deer are “messengers of the Gods.” And in Nara Park, these sacred animals have been carefully protected for many years.

Before the Covid-19 pandemic, people were buying shika senbei 鹿せんべい (deer crackers) to feed them. But, recently, the Nara Deer Preservation Foundation announced that people aren’t allowed to give food to Nara deer anymore.

Yeah, that’s a bit disappointing… but cheer up! Meeting wild deer wandering freely is pure magic on its own! And we believe that once you see it, you’ll never forget it. 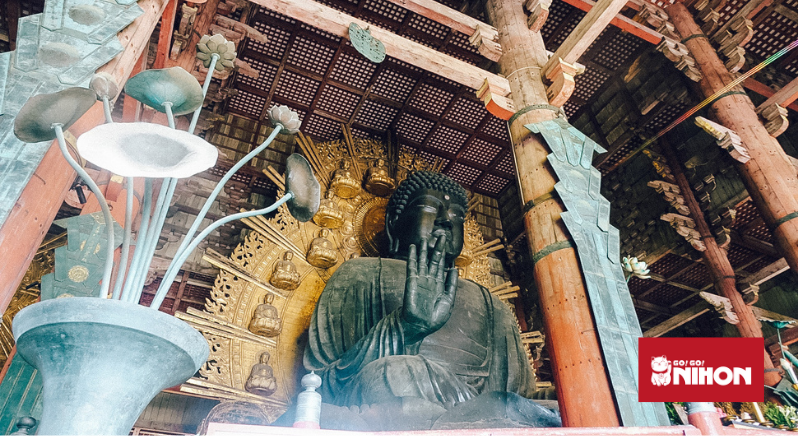 Worship at Nara’s most celebrated shrine

Kasuga Taisha 春日大社 is an ancient shrine that is located right in the heart of Nara Park. Since the 8th century, worshippers have donated 3,000 types of lanterns that you can see everywhere: on the pathways, buildings, and even in the inner courtyard. These details turn this Japanese shrine into a genuinely mysterious place.

Discover how to worship at Japanese shrines here.

Have a walk in the Isuien 依水園 garden , a peaceful oasis located just in the center of Nara City. The stunning garden is surrounded by ponds and divided into two parts representing different periods (17th and 20th centuries). If you want to look at ancient artifacts from China and Korea, it also has a small museum.

Travel back in time visiting Naramachi

Strolling through Naramachi 奈良町, a former merchant district of Nara is like going back to the Edo Period (1603-1868). The narrow alleys have well-preserved wooden houses called machiya 町家 that nowadays function as museums, stores, and restaurants. Get lost in town and imagine yourself back in the 1800s!

Discover one of the best cherry blossom spots in Japan

If you visit Nara City in spring, you should climb Mt Yoshino (Yoshinoyama 吉野山) to celebrate spring. During sakura season, this UNESCO World Heritage Site is one of the number one spots in Japan to admire the beauty of cherry blossoms!

Your trip to Nara City would be incomplete without trying local Japanese food. Especially, when some experts claim that Nara was the birthplace of Japanese cuisine. To have an authentic Nara experience, here are some local delicacies you should definitely try.

Narazuke 奈良漬 is a pickled dish made of veggies and fruits. Japanese people use a mix of sake 酒 and mirin 味醂 (sweet rice cooking wine) to marinate ingredients and ensure a perfect balance of sweetness and saltiness. The cooking process can take up to 4 years!

Miwa Somen 三輪素麺 are traditional Japanese noodles that came to Japan from China. Locals usually add them to a warm broth, turning it into a perfect winter meal!

Kakinoha-zushi 柿の葉寿司 is very different from your usual Japanese sushi. Served with salmon or mackerel, this sushi is wrapped with persimmon leaves that you should remove before eating.

When it comes to drinks, try Yamato tea. It’s organic, rich in flavour, and has a saturated green colour.

And if you drink alcohol, then don’t leave Nara without trying local sake. Nara is believed to be the birthplace of the sake we know today. It’s believed it all began 600 years ago at Shōryakuji 正暦寺, a temple that’s believed to have established sake brewing techniques that form the foundations of modern sake.

Why is Nara City worth visiting?

Whether you’re an adventurer, foodie, or nature lover, Nara City is a fantastic place to explore. It has delicious food, astonishing Buddhist temples, impressive Shinto shrines, peaceful strolling routes, and breathtaking hiking trails. Everything in this city will remind you of the Buddhist and Shinto influences, returning you to ancient Japan.

The soul of any city is in its people, and Nara isn’t an exception. Learn some daily phrases to communicate with Nara citizens in restaurants, shops, and museums. Sometimes small chit-chat with local people can tell you more about the city than historical monuments.

But, if you consider studying Japanese seriously, our schools in Kyoto and Osaka will help you acquire fluent communication skills to make the most out of your stay in Japan.

If you want to learn more about Japan’s travel destinations, food, culture, or the Japanese language, check out the rest of our blog!

125
Study Trips Accommodations Advertise with us