Spring may best be symbolized by sakura, or cherry blossoms in Japan. Cherry blossoms also symbolize the beginning of the year for many, as the Japanese school year and fiscal year start in April, just when the sakura are in full bloom throughout the majority of the country.

The Japanese place great value in the distinction of four seasons and “feeling the seasons.” Living in Japan, you’ll find the four seasons reflected in the variety of seasonal products, clothing, food, traditional customs, and events. 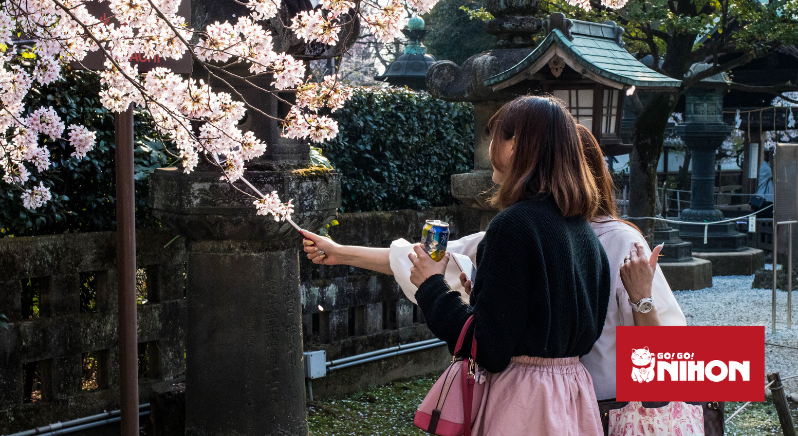 Cherry blossom season in Japan is typically around late March to the beginning of May, and the blossoms bloom generally in order from the Southern parts of the country to the Northern parts. In addition to the regular weather forecast, during the spring season the cherry blossom forecast is shown on TV and other media, as well as being available on mobile apps made specifically for the purpose.

The sakura forecast usually releases in March by the Meteorological Corporation and shows when the cherry blossoms in Japan will start to flower (kaika; 開花) and reach full bloom (mankai; 満開) in around 1,000 viewing locations across Japan. According to the forecast, someiyoshino, the most popular type of sakura, usually starts to bloom in Tokyo around mid-March, along with Nagoya and Fukuoka, whereas areas like Osaka and Sendai get the sakura season a bit later, in late March/early April.

As sakura blooms are short-lived, the Japanese are reminded of how short life is and to embrace present moments. A fallen sakura petal is believed to symbolize the end of a life. At the same time, it’s also revered as a symbol of renewal and new beginnings. The sakura season is beloved nationwide and is a delightful end to the long winter and the beginning of another year. Hanami parties are attended by many Japanese to enjoy the short sakura season fully. Hanami literally translates as “flower viewing” in Japanese, though it typically refers to sakura. A casual stroll through the park under the trees could be considered hanami, however, hanami generally alludes to spending hours under the trees picnicking. A major custom for springtime, people often attend several hanami parties, usually with different groups of friends, family and coworkers or schoolmates.

Choosing a good spot is crucial for hanami, and for work functions, junior associates are often sent to reserve spots for the group from early in the morning or sometimes from the night before at popular locations. Blue plastic sheets are used often to block off space in advance, sometimes with signs of the group or representatives’ names and times they are scheduled to start. Reserving the spot may require someone to guard the space for hours in advance.

Yozakura, or night sakura, is also a popular way to enjoy the short season, casually gathering after work hours at locations where sakura are lit. Eateries with a view of sakura are good choices as it can still get quite chilly in the nighttime outside, and you don’t have to deal with preparing food and drinks or cleaning up afterwards.

Almost as important if not more so are the food and drinks to enjoy under the trees. There is even a saying, “hana yori dango,” meaning “dumplings over flower,” to represent some people placing more value on the picnic than the flowers. Be careful not to say it to your bosses or people you need to be respectful to, even if they look like they care more about feasting as it could be considered a rude term, implying that they cannot enjoy artistic beauty or cultural traditions.

Department stores, restaurants, hotels, supermarkets and convenience store shelves will be lined with hanami bentos and otsumami, or snacks, to be eaten outside. Seasonal ingredients are abundantly used, such as edamame, bamboo shoots, Spanish mackerel, shiitake mushrooms, asparagus and cabbage. You can also make your own bento or easy snacks to eat with popular drinks of beer and sake.

Sakura mochi is an obvious choice for dessert, a sweet pink mochi filled with red bean paste (anko) and wrapped in sakura leaves. A variety of other seasonal foods and desserts feature dried or pickled sakura flowers or cherry flavors.

Cherry blossom time in Japan may be more appreciated because it lasts only a few days. When there is bad weather, it may shorten the sakura season even further, which adds to the urgency to make the most of it while it is there.

When you’re in Japan, be sure not to miss out on the cherry blossom season and go out for hanami as much as you can. Not only are the flowers beautiful, these events are crucial to socializing in Japan and you’ll be able to bond with old friends as well as make new friends.

10702
Study Trips Accommodations Advertise with us