Fierce samurais, rich feudal lords, heavenly emperors, and you can bet even the farmers on the rice field have shared a toast of Japanese sake (酒) with the deities. The alcoholic beverage from Japan has a history that stretches over a thousand years. A drink that has been praised for its complexity, simplicity, and versatility throughout history. Still running smoothly!

Come along a journey through the world of Japanese sake where we’ll unravel its history, taste, and give you tips on how you can visit a sake brewery while staying in Japan.

For relaxing times, bring on the sake! 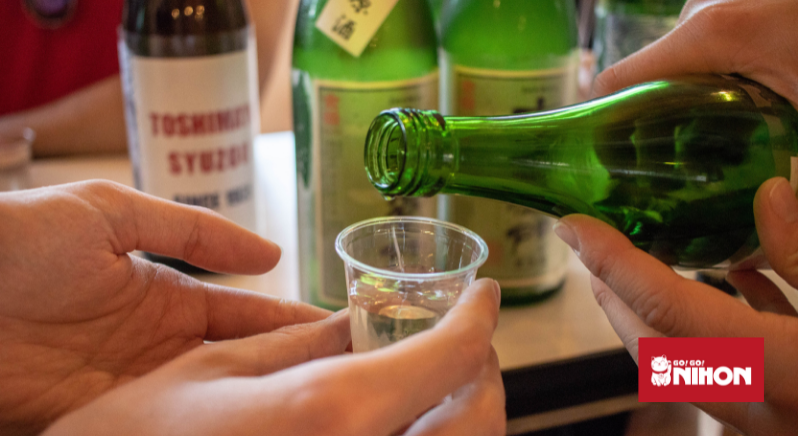 What is Japanese sake?

It can be confusing at times when speaking of ‘Japanese sake’ as it’s usually interchangeable for any kind of alcoholic beverage in Japan. Beer, whiskey, wine and nihonshu 日本酒 are in a sense all ‘sake’. However, when speaking of sake in this article we’ll be focusing on nihonshu, which is an alcoholic beverage that consists of rice, water, and kōji 麹. Kōji being a mold that is sprinkled on top of the rice in order to start a fermenting process that will give off enzymes that converts starch into sugar. And we all know what that sugar will become don’t we? Yup, that’s correct, alcohol.

Now, we all know that Japanese people love rice, right? Or wait, that doesn’t quite capture it. We all know how much Japanese people adore rice, don’t we? Especially good quality such. And of course Japanese sake is no exception to that rule, consisting entirely of rice. However, rice isn’t just rice. The rice you find in onigiri おにぎり(rice balls) and sushi 寿司 is actually quite different from the rice used when brewing sake. For example, the rice grains used to make Japanese sake is 30% larger than regular rice, it contains more starch, less fat and protein. And the layers of the grain are also more evenly separated which makes the grain a lot more suitable for the oh-so-important polishing process.

Japanese sake is sometimes referred to as a Japanese rice wine which has wrongfully led to it to be seen as a type of wine. But there are more differences than similarities. While wine is fermented, sake is actually brewed, just like beer! And in comparison to wine the percentage of alcohol in Japanese sake is usually higher, ranging from 15-16 percent. And last but not least, Japanese sake is brewed using rice! Only!

The history of Japanese sake

Japanese sake has been around for roughly a thousand years, and some believe it all began by accident when some poor farmer forgot his rice on the stove a bit too long, leading it to start molding. As Japanese regard throwing away things as wasteful, known as mottainai 勿体ない this poor farmer had no choice but to make the most out of the unfortunate situation and somehow consume it. Regardless of its moldy outlook. And tadaa-, Japanese sake was born.

Now, whether or not this is true we don’t really know, but Japanese sake became immensely popular during the Edo period (1603-1868) after implementing a new technique of the brewing process that would allow the sake to be pasteurized. This method, where the sake was heated, enhanced its flavors while at the same time killing harmful bacteria that might have snuck into the sake during production.

Japanese sake was originally a beverage that Japanese drank mostly during weddings, funerals, and festivities. Today, that has changed entirely. Nowadays you can enjoy sake whenever you feel like it, let it be together with mesmerizing sushi, luscious kushiyaki (串焼き, skewers), or simply after a long tiresome day at work at your local bar with friends. Every occasion is a sake occasion, kind of.

How sake is made

Making sake is a complex process that we won’t be able to fully explore in this article alone. Here is an overview: 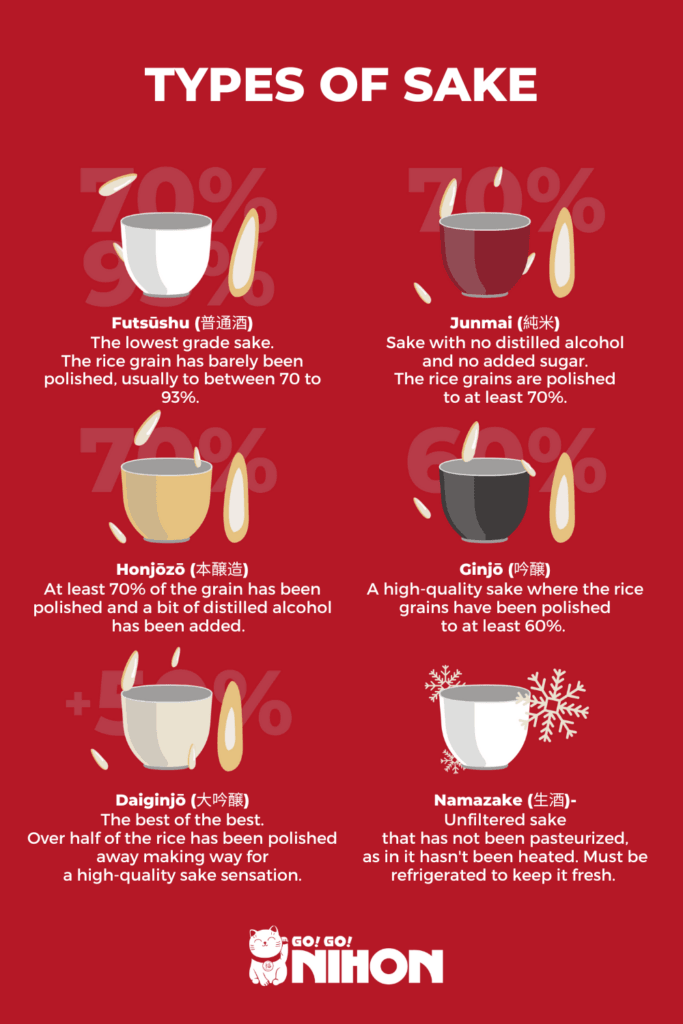 A wide selection of flavors

The rice grains are polished differently depending on what category of sake you are making, and they are separated depending on how much of the grain has been polished away. For example, some are polished leaving only 30%, 40% and 60% of the grain. A rule of thumb is that the more you polish, the better the quality.

Apart from the polishing process another key element of sake production is whether or not you add distilled alcohol. By adding alcohol, the character and taste of the sake changes. Of course there are many other factors that influence the taste, apart from polishing and added alcohol that is, craftsmanship and regionality often considered being two of them. How to consume sake

While a beer is usually served chilled and wine a little less so, sake can be consumed both ways. There are know-it-all ‘experts’ who claim it should be consumed warm to enhance its flavors, they could not be more wrong. Sake is truly an alcoholic beverage that can be consumed either way. More often than not, sake brewers intend for the sake to be consumed in a specific way, hot or cold, when they make it. You can always try to consume it one way and then the other, but one will likely yield a better taste. Either way, feel free to try!

While many believe the consumption of Japanese cuisine and beverages follow a set of strict rules, it’s actually quite the opposite. If you prefer drinking or eating something in an unconventional way you are more than welcome to do so. ‘No way’ is literally the wrong way. Promise!

Visit a sake brewery in Japan

There are several hundreds of sake breweries throughout Japan. Each and every one of them with their own tradition and regional quirks. Since Japanese sake has become more popular among foreigners, many breweries offer free tours in English. Go! Go! Nihon visited the Sawanoi brewery in the city of Ōme 青梅, roughly one and half hour train ride from central Tokyo. Sawanoi brewery offers picturesque nature and running water along this family owned brewery that has been on the same location for generations. During the tour you will get to see how sake is brewed, experience the traditions that influence the production, and last but not least you will be able to taste a wide selection of great sake.

4241
Study Trips Accommodations Advertise with us