As you go about your life in Japan, you’ll notice that there are certain words and phrases that you will hear people use all the time. Of course, knowing the language will add so much more depth to your life in Japan. But if you’re new to the language, you’ll want to know some essential Japanese phrases for daily life.

Here are our top 5 essential beginner words and phrases to get you through your daily life in Japan.

This word will probably become one of your most frequently-used Japanese words because it can be used in a few different contexts. It means “sorry” but can actually also mean “excuse me”, “thank you” and it can be used to get someone’s attention (for example, at a restaurant when you need to call the waiter).

There are so many situations where you can say it: when getting off a crowded train, when you ask someone for directions, when you accidentally bump into someone at the supermarket, when asking someone for a favour, when apologising to someone.

すみません、トイレはどこですか？
Sumimasen, toire wa doko desuka?
Excuse me, where is the toilet?

すみません、降ります！
Sumimasen, orimasu!
Excuse me, I’m getting off (the train)!

Note that “sumimasen” is considered a soft apology, so it’s not used to apologise for more serious offenses. For example, you wouldn’t use it at work to say sorry for missing an important deadline.

Daijoubu desu is one of the most versatile and essential Japanese phrases for daily life. Daijoubu means “alright” or “okay”, but in the right context it can also be used to mean “yes” or “no”.

A common scenario where you might use this phrase is when you’re at the supermarket and the clerk asks you something. For example, whether you brought a point card. If you don’t have one, you can just say, “daijoubu desu” and the clerk will be able to deduce from the context that you mean “no”.

Another common situation you would say this is when confirming a reservation or appointment, for example with a restaurant or doctor. Often they might ask you if a particular time suits, to which you would respond, “Daijoubu desu” if the time works.

You can ask, “Daijoubu desuka?” as a question to someone to ask if they’re okay with something. For example, if you’re meeting someone but you’re running a little late, you can call or message them to say:

There are so many ways this phrase can be used and there’s no doubt you will very quickly start using it in your daily life in Japan. 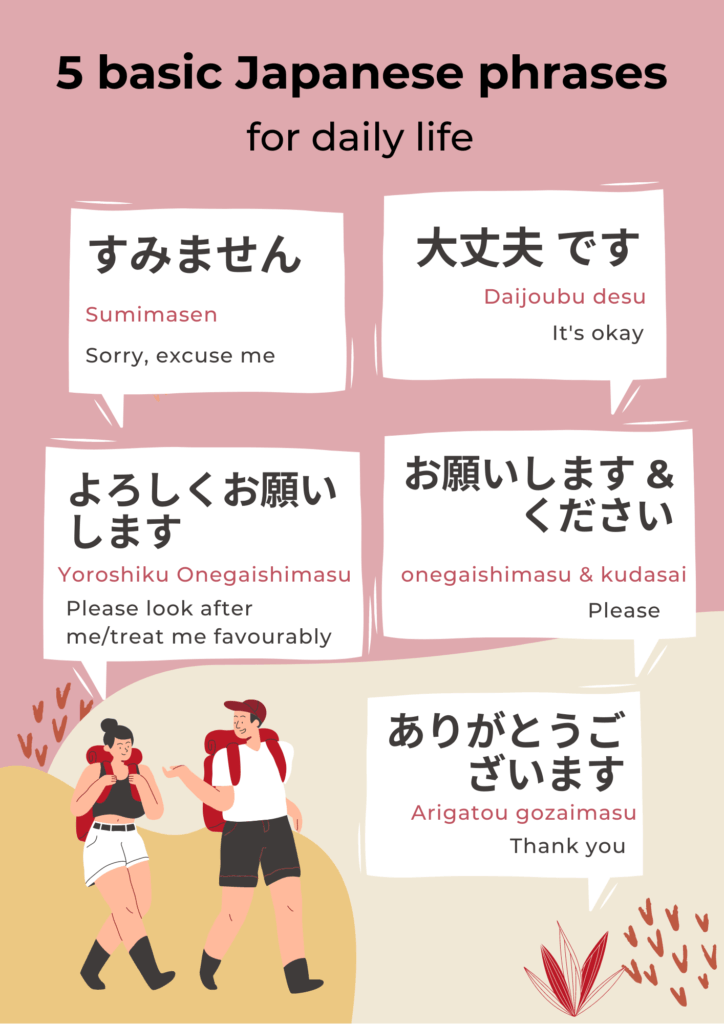 Another versatile phrase that is often used in Japan, “Yoroshiku onegaishimasu” doesn’t have a direct translation. Instead, the meaning can change depending on the situation, but in general it refers to your gratitude for an action that will take place in the future.

You say it when you meet someone for the first time, when you want to show gratitude to someone, when you ask someone to do something for you, when you order at a restaurant or cafe, and more.

In a work situation, you might need to ask someone to do something for you. In that case, you would use this phrase to express your gratitude:

田中さん、この資料明日までにコーピをしてくれますか？よろしくお願いします。
Tanaka-san, kono shiryou ko-pi o shite kuremasuka? Yoroshiku onegashimasu.
Tanaka-san, could you make a copy of this document for me? Thank you very much in advance.

You can also shorten it in more casual situations, such as with friends. For example, if you ask your classmate if you can borrow their Japanese notebook:

Note: read up about Japanese honorifics, such as -chan, in our article here.

To learn all about how to use this phrase, read our article on when and how to use “yoroshiku onegaishimasu”.

Both these words are important to know as part of your essential Japanese phrases for daily life because they both mean “please. For example, when you order at a restaurant or ask someone to do something for you, you say “kudasai” or “onegaishimasu” at the end.

“Onegaishimasu” is more polite than “kudasai” and sometimes they are interchangeable, but there are also certain situations where you would only use either one or the other.

For example, in work situations it’s better to use more polite language. So “onegaishimasu” would be more suitable when asking someone to give you something or do something for you.

However, you would generally use “kudasai” after an action, for example:

You can’t have “please” without “thank you”, so of course arigatou gozaimasu is included on this list of essential Japanese phrases for daily life. Using this phrase is pretty straightforward and even if you know very little Japanese, you can at the very least communicate your gratitude effectively with “arigatou gozaimasu”.

For example, when you’re at the supermarket and the clerk gives you your change, you would thank them by saying, “Arigatou gozaimasu”.

At school, you might ask your teacher a question, after which you would thank them for their help with, “Arigatou gozaimasu”. You’ll probably also thank them after each class with, “arigatou gozaimashita”, which is the past tense.

With people you’re more familiar with, you can drop the “gozaimasu” and just say “arigatou”. Or you can say “doumo arigatou gozaimasu どうもありがとうございます” to convey that you are extremely thankful for something. For example, if someone did something that was inconvenient for them, but very helpful for you, you might want to show how grateful you are by telling them, “doumo arigatou gozaimasu”.

Similarly with arigatou, you can also just say “doumo” in casual situations.

Taking it beyond just the basics

While these simple words and phrases are practical and helpful, we highly recommend you to learn the language properly if you want to live and work in Japan. The best way to do this is to study in Japan while being fully immersed in Japanese society. You can read more about the benefits of studying Japanese immersively in our article here.

Or, if you’re not able to make it to Japan just yet, you can also study the language online with Akamonkai, which is Tokyo’s largest Japanese language school. You can learn more about the course – and our other online courses – here.

1905
Study Trips Accommodations Advertise with us