Japanese sweets are as beautiful as they are delicious. Japanese traditional sweets, wagashi (和菓子), are an art practice in and of themselves and are designed to stimulate all five senses. As a culture with a history of appreciating and respecting nature, many Japanese sweets also reflect the changing seasons and the emotions that come with these transitions.

Everything from the taste, texture, presentation, smell, and the name of these sweets thoughtfully represent in-season ingredients and changing colors of the landscape. This guide will introduce traditional Japanese sweets, as well as other popularized Japanese interpretations of Western desserts. 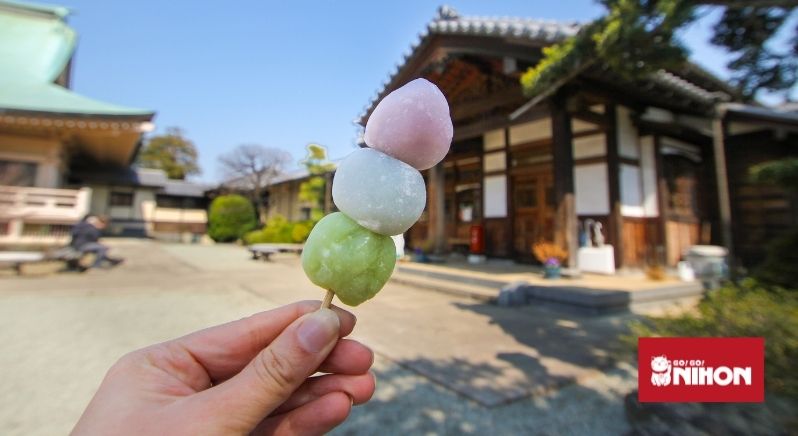 Sakura flavored sweets — Spring is a momentous occasion in Japan. In March and April, cherry blossom trees that were dormant from the winter wake up and bloom to paint the landscape pink. During this season, you can expect to come across delicious sakura flavored and sakura shaped sweets including sakura mochi, soft serve, jelly, tea, sake and cookies.

Hanami dango (花見団子) — The kanji for hanami (花見) means flower viewing, and dango is a rice flour dumpling. Served on a stick, this treat amongst Japanese sweets is perfect to enjoy while picnicking beneath or strolling through groves of sakura trees. Hanami dango is a skewer with three round dumplings in pink, white, and green. There are different interpretations of the hanami dango’s colors: represent the life cycle of the cherry blossom with pink buds, white flowers, and green leaves. Another interpretation is a picture of spring: pink cherry blossoms, melting white snow that reveals green grass. 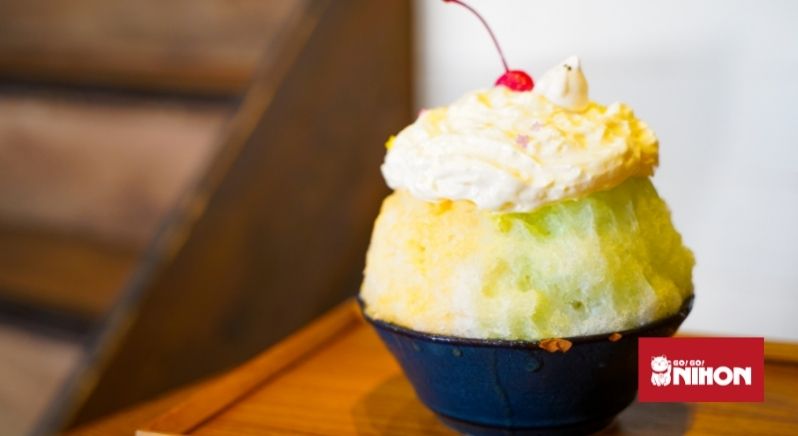 Kakigori (かき氷) — A shaved iced dessert can cool you down during hot, humid summers in Japan. Dating back to the 11th century, kakigori was once considered a luxury, reserved for the nobles as it required people to shave down ice by hand. Kakigori is made with frozen mineral water, shaved to form a tall mound of fluffy ice so soft and delicate that gently dissolves in your mouth. You can keep it simple with flavored syrup, or dress it up with Japanese toppings. 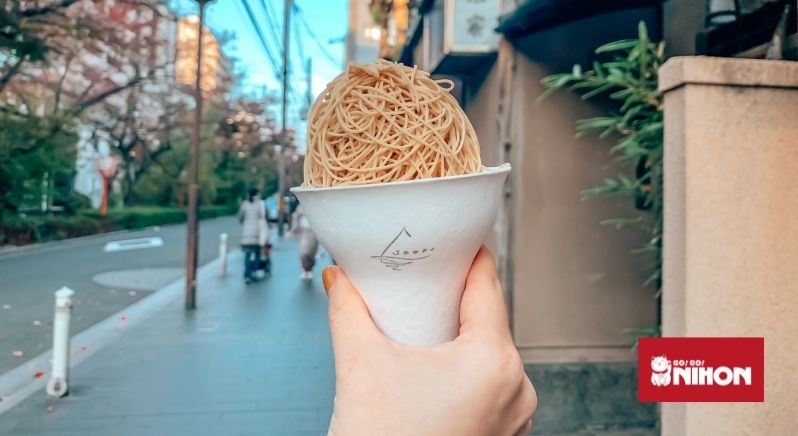 Kaki (柿)— Yes, fruits can be dessert. Persimmons are a national fruit in Japan, and during the fall, you can see rows of bright orange persimmons hung on string and left out to dry in the sun in the countryside, or preserved in jars with salt. Dried persimmons are said to be much sweeter than sugar, which makes it both a tasty, healthy snack. With a long shelf life, dried persimmons can be savored throughout fall and winter.

Kuri 栗 — Chestnuts are a popular ingredient in fall sweets. In Japanese sweets, you can also find traces of European influences, including the castella sponge cake. Kuri dorayaki (くりドリ焼き) is a fall spin on the quintessential dorayaki, consisting of two pillowy castella pancakes sandwiched together with a red bean filling mixed with roasted chestnuts, making each bite even more savory and earthy. There’s also monburan (モンブラン), a Japanese twist on the French dessert Mont Blanc, made with sponge cake, fresh cream, coated with a chestnut purée and topped with candied chestnuts. 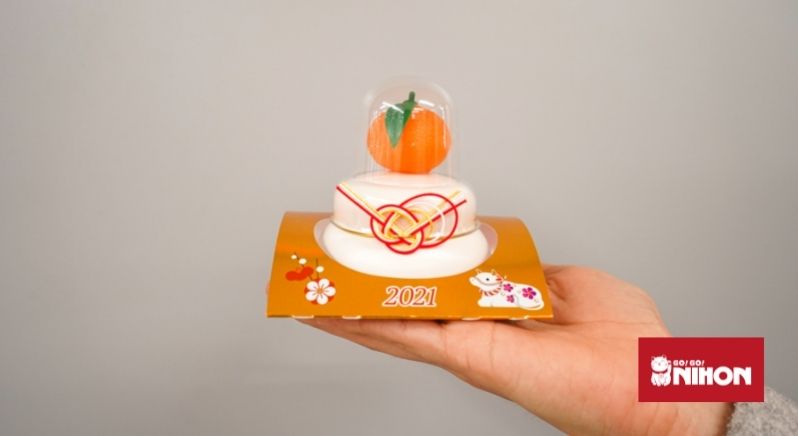 Mochi (餅) — While mochi rice cakes are consumed year-round, around the New Year you can expect to see many participate in mochitsuki (餅つき), a tradition of pounding rice into mochi with a large wooden mortar and pestle. This dates back to the Heian period (794-1185), and there are even festivals around the event, bringing together the community with performances and games. During the New Year you can expect to see kagami mochi (鏡餅) mirror rice cake, a decoration used as an offering to kami gods to bring good luck for the next year, and mochi treats like daifuku (大福), translating to “great luck”, stuffed with fillings red bean paste or strawberries.

Red bean soup (ぜんざい/おしるこ) — As we’ve seen, azuki red beans are a staple in Japanese sweets. Red bean soup, often called either zenzai or oshiruko depending on which region you’re in, is a classic sweet for the winter, where red beans are the star of the show. In western Japan, oshiruko is made from smooth red bean paste, while in eastern Japan, zenzai is made from chunky red beans. Often paired with mochi, you can also add chestnuts and shiratama dumplings.

Whatever your taste and whenever the season, there’s sure to be something in Japan that satisfies your sweet tooth. For more information about tasty treats in Japan, keep following our Go! Go! Nihon blog.

2571
Study Trips Accommodations Advertise with us