In the summer of 2012, I followed behind my supervisor as she walked me around to each department in city hall, allowing me to introduce myself as the city’s new assistant language teacher. I spoke no Japanese at the time, and basically memorized my entire self-introduction phonetically in the hopes that it would get me by until I had more time to study Japanese.

A self-introduction (自己紹介, jikoshōkai, jiko meaning oneself and shoukai meaning introduction) sounds pretty self-explanatory in theory, but culturally in Japan, there are certain procedures to follow. It’s more of a “thing” here as opposed to the English “Hi, my name is…” When coming to Japan to study, work, or take the first steps into diving deeper into the culture, a quality Japanese self-introduction is indispensable.

As with culture and language in general, even when communication is nearly impossible (which is guaranteed to happen when traveling!), manners go a long way. Nobody will expect a foreign exchange student or tourist to step off the plane and speak perfect Japanese, but reading the situation, bowing, and smiling, will already set a good precedence.

Start with a hello (こんにちは, konnichiwa) if it’s during the day, a good evening (こんばんは, konbanwa) if it’s later into the day, or a “nice to meet you” (はじめまして, hajimemashite). Hajimemashite really means something along the lines of “it’s my first time meeting you,” but it’s best catch-all phrase when introducing yourself. If in doubt, just go with this one.

These are the basics! Remember these and you’re off to a good start. 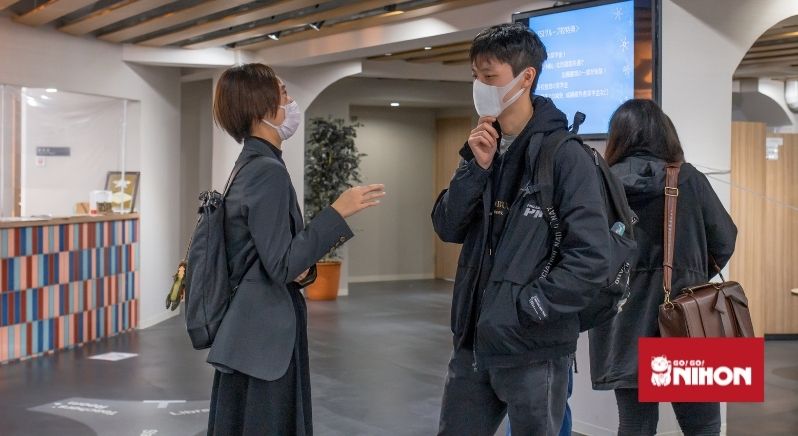 Subtlety is an important aspect of Japanese culture. It’s in all the little interactions, the art, the physical gestures, and in the language itself. Missing them in the self-introduction, especially if you’ve just arrived in Japan, probably won’t be counted against you, but knowing the little details can give you some bonus points!

Though we shake hands in the west, it’s usually reserved for those of the same or lower status over in Japan. If this person is your boss, your teacher, or somebody you don’t know, then play it safe and bow.—And don’t talk or finish up your speech while you’re bowing. Finish everything you say, and then bow. It’s considered rude to bow while talking.
Keep these little things in my mind and make a strong first impression. If anything, it never hurts to be nice.

Make it your own

Of course (and as a warning, this is just from my experience, so take it with a pinch of salt), don’t feel the need to stick to this rigid template. Unless you’re interviewing for a big job at a serious company—in which case I imagine you’ll be required to speak pretty fluent Japanese, and probably won’t be needing this guide—remember that you’re there just as much to share your culture and who you are as you’re learning from those around you.

People will be curious and ask questions. Talk about your town, what your plans are for Japan or the future, or even show a special talent you may have up your sleeve. I’ve met friends who came here and sang a song or showed a cool trick when introducing themselves to a class of Japanese kids. Your situation may differ, but remember the basics, mind the etiquette, and have fun with it!

If you want to navigate this situation with ease, the best way is to study in a Japanese language school; it’s one of the first things you will learn, and the more you learn Japanese, the better your introduction will become!

20090
Study Trips Accommodations Advertise with us