Is learning Japanese from anime really an option? Or will you just learn a lot of slang and fighting talk?

Well actually anime can be a great accompaniment to your Japanese language studies (although definitely not a replacement). In particular it can help you get used to hearing Japanese spoken in a casual manner so when you’re out in Japan it won’t seem so new and confusing.

To get you started we thought we’d put together a set of words that you’ll hear a lot in anime and real life.

Some of the first words you should learn in any language are the greeting. There are a couple of anime genres in particular that will be most useful for hearing and learning these, for instance, school-based anime and slice of life animes.

Here are a few words to listen out for along the greetings and farewell lines.

Tadaima: “I’m home!” To say when you get home

Okaeri: “Welcome back”, in response to tadaima.

If you want to learn more about these then we have a whole blog article on this that’s worth investigating. You may already have come across honorifics and realised just how important they are in life in Japan. Anime and manga can be a great way to get a broad overview of all the different types but remember to be careful as it’s easy to seem rude if you get these wrong.

–Chan, kun and san: the best known trio. San is the most generic, a form of respect for people that you don’t know if anyway. Chan and kun are used with friends and children, and denote affection for someone you know closely. The main difference is that chan is more commonly used with girls, and kun with boys.

–Sama: is the honorific that expresses maximum respect and is used more frequently to address customers (お 客 様, o-kyakusama) or to deities (as kamisama, “God”).

–Dono: a literal translation could be “my lord” or “master”, but this does not mean that the person in question is necessarily a noble. You’ll hear this one a lot in historical anime (especially samurai). Although rarely used today you may come across it in some commercial correspondence or on certificates.

–Senpai: used to refer to students or older colleagues.

Then we have the tomodachi kotoba (友達言葉, informal) indicating a great intimacy with the other person. They are many to go through, but the most common are rin and pyon, mostly for women, and tan and ppe, more commonly used for boys.

If you are intrigued by the origin and use of suffixes in the Japanese language, you can learn more about it with our article dedicated to honorary suffixes to help you understand more as you learn Japanese from anime! 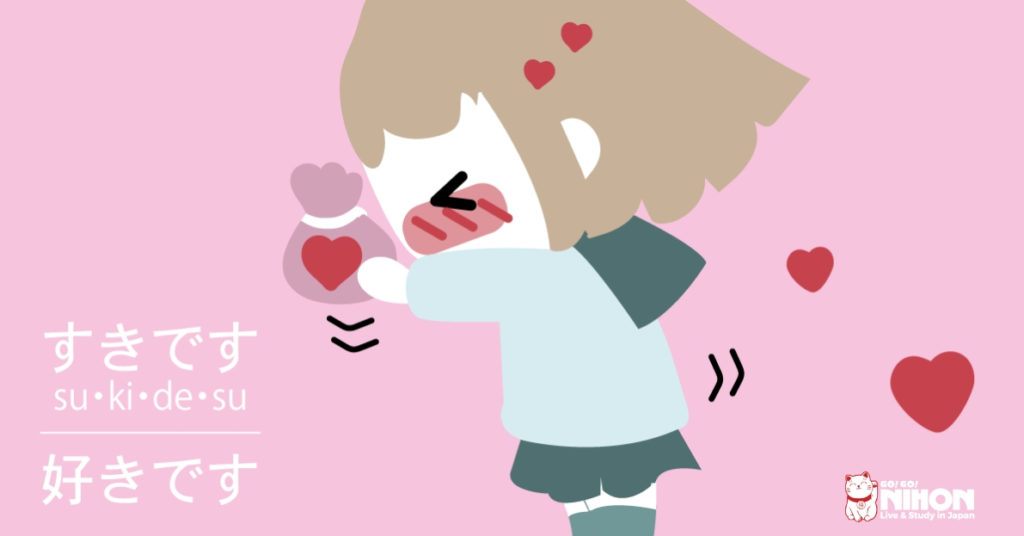 Expressing feelings – in and outside of school

Shoujo anime, the kind usually intended for a female audience, focuses a lot on feelings, and in particularly those of teenagers at school. It’s likely you’ll have seen all the Valentine’s Day and Christmas episodes, unrequited loves, declarations of love, they’re not to be missed.

Here are the most common phrases and words that are used in these situations!

Kiritsu! Rei! Chakuseki! (きりつ! れい! ちゃくせき!): “Stand up! Bow! Sit down!” are the words the teacher speaks before starting a lesson, asking the students to stand up and greet the professor with a bow.

Suki (好き): “I like you” or “I like it” (depending on the context), although I think everyone knows this word. It can also be heard as “suki desu!” or “daisuki!”, which means “I like you /like you a lot!”.

Tsukiatte kudasai (付き合ってください): “go out with me, please!” To use to declare your love to someone and ask them for a date.

Ganbatte!: “Give it your all!”, “Do your best” and so on. There’s a lot behind this statement and you can learn more by reading our article on ganbaru.

Giri Giri Safe: giri giri seーfu (ギリギリーセーフ) and translates as “just made it!”. The favourite phrase of late-comers who manage to arrive just in time for classes.

Kuuki Yomeru (空気読める): literally, “read the air”. It means to understand the situation and read the air in the room to act accordingly, for example during a very tense situation. The negative phrase, kuuki yomenai (空気読めない), indicates someone unable to read between the lines.

Itadakimasu and Gochisousama:”Enjoy your meal” and “thank you for lunch”. As a society centred around politeness and etiquette, insults don’t really exist in the way we know them in other places. As such most of the words that are insults are more normal words and phrases said with an aggressive tone.

It’s an expansive and unusual area to explore so we’ve picked our favourites from the anime world.

Mendokusai: “What a break!”. Sometimes boys with change the sai ending to a seー which is typical of masculine speech.

Urusai!: depending on the context, it can be interpreted as “silence!”, “Lower your voice!”, Or even “You’re nagging!”, “You’re annoying!”.

Kisama: the literal translation is “you”, but this form is considered very aggressive and rude.

Kuso: a more colourful way of exclaiming “damn it!”. 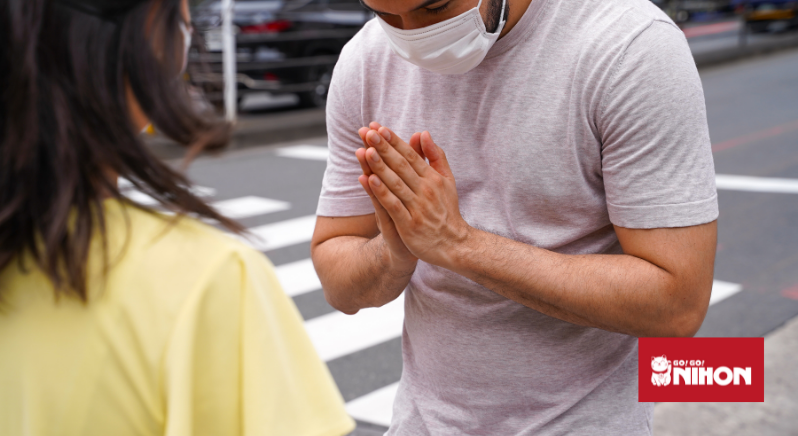 An introduction to keigo

Anime can even be useful in the workplace if you watch the right variety.

If you’ve started studying Japanese then you may be familiar with the difficulties of keigo. Aside from honorifics, there’s an entire honorary language. The best place to start tackling this tricky part of Japanese is with some commonly used phrases that you’ll hear a lot (particularly in anime)

Irasshaimase!:Whenever you walk into a shop or restaurant, and you’ll see this a lot in anime too, you’ll hear this shouted loudly to every customer. It essentially translates as “Welcome!”.

… to moushimasu (__と申します): This is used when you’re introducing yourself and telling someone your name.

Kashikomarimashita (かしこまりました): Use this when confirming to your superior that you are taking up an order or task. Waiters commonly use this once you’ve placed your order.

We’ll stop here as we could go on forever with so many different types of anime that can help you on your way.

If you already knew them from your favourite anime, why not share which ones you found the most useful to help others on their way to learn Japanese with anime.

12869
Study Trips Accommodations Advertise with us