Greetings are important in many cultures and languages and Japan is no different. There are plenty of Japanese greetings, each with their own unique set of usage rules. It’s essential to master how to greet in Japanese if you plan on living and studying in Japan.

Because of the importance of greetings in the Japanese culture, it should be one of the first things you learn when learning Japanese, in addition to characters. Read on to learn the basics of Japanese greetings!

Aisatsu is very important and is taught from early childhood. For example, it’s not uncommon for school kids to greet every passing student of a higher grade as a sign of respect. Also important in the workplace, Japanese greetings can create a positive working environment and promote communication between coworkers.

Another interesting thing to note is that handshaking is not as common and bowing is much more prevalent as a custom. 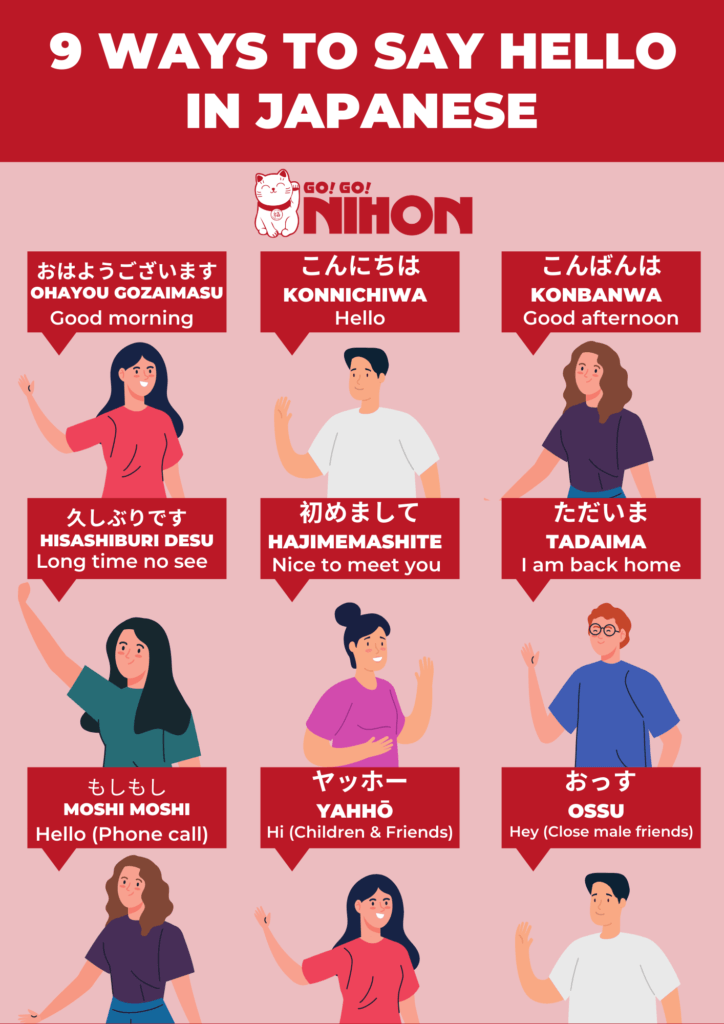 This roughly translates to “good morning,” and is used typically in the morning hours before noon. The actual word for “morning” is not included in the phrase. However, the base word is hayai (早い), which means “early.”

You can leave out “gozaimasui” for close friends and family for a more casual greeting. But always use the full phrase to greet those outside of your circle of acquaintances and those more senior than you. In some businesses, it’s customary to say “ohayō gozaimasu” at any hour of the day, when you are first clocking in, or greeting someone for the first time that day.

Probably the most well-known Japanese greeting, konnichiwa roughly translates as “hello,” and can be used at any hour. However, you most commonly use it during the day time between 11am and 5pm. Literally meaning “today,” or more originally, “the sun,” it makes sense to use it while the sun is up.

After around 6pm or sunset, you can use konbanwa, which roughly translates to “good evening,” but literally means “tonight.” In contrast to “konnichiwa”, “konbanwa” sounds more formal, and most people don’t use it with their close acquaintances.

This literally means something close to “please rest,” or “have a good rest”, but is used to mean “good night.”

Contrary to popular belief, sayōnara is not used that often. Its literal meaning is “if it is so.” Even rarer these days is gokigenyō, meaning “farewell,” which was together with “sayōnara” until around the Edo period. It meant “if it is so, farewell,” as a complete greeting. Around the Meiji period, men started to drop the latter and say “sayōnara” only, while women would respond with “gokigenyō”. Around the Showa period, many women also started preferring “sayōnara” and “gokigenyō” is not as commonly used today.

The Japanese have greetings specifically for when someone leaves the house or office, which may be a new concept to non-Japanese speakers. The person who leaves says, “ittekimasu“, which is literally: “I’ll go and come back.” Whereas the person staying says “itterasshai“, literally “please go and come back.” These are used daily, but only at the home or office or somewhere where people are based, since it only makes sense when they will go and come back.

Read more about these particular greetings in our article on unique everyday Japanese phrases.

Similar to above, there are phrases for returning home or to the office. The returning person says, “tadaima”or “tadaima modorimashita“. This means: “I have come back now.” The person welcoming him/her back says, “okaeri” or “okaerinasai“, to mean “welcome back”.

There is one particular greeting that is used only on the phone. The origin lies in the verb mōsu (申す), a polite form used for oneself of the verb iu (言う), “to say.” You will often hear “moshimoshi” on the phone at the beginning of a conversation, to make sure both parties can hear the line.

However, a more polite way to answer the phone today is “hai (はい)” or “yes,” followed by your name or your company and your name, when you are taking business calls.

Similar to in-person meetings, a business caller will most often say, “osewa ni natte orimasu (お世話になっております)” to show appreciation for the relationship.

Read more about the meaning of “osewa ni narimasu” in our article on the top Japanese business phrases you need to know.

This is probably the most commonly used greeting in the workplace, but is quite difficult to translate. The origin verb tsukareru (疲れる) means “to get tired.” It’s generally used as a sign of recognition for hard work and mutual support. So it is usually said after work.

Again, learn more about this phrase in our Japanese business language article.

One of the first greetings you hear or see at the airport in Japan may be “yōkoso“, to mean “welcome.”

In stores and restaurants, on the other hand, customers are greeted by an enthusiastic “irasshaimase“, which is a welcome that usually does not expect a response.

Etiquette and manners are very valued in Japanese society and culture. Whether you’re a tourist, student or worker, one of the first steps to living in Japan is to familiarise yourself with the language and culture. Now that you’ve learned some basic Japanese greetings, be sure to use these at various occasions in Japan!

92334
Study Trips Accommodations Advertise with us