It’s often said that Japanese is a complex language to learn and one of those reasons is the use of keigo, or honorific speech in Japanese. You might think you’ll never need to learn Japanese keigo, but it is incredibly important, especially if you ever plan on working in Japan. In fact, keigo is so closely linked to working in Japan that it is often referred to as Business Japanese. Read on to learn more about polite Japanese and why you should learn keigo.

As you might know, Japanese culture is focusing heavily on social harmony and on the collectivism (the “us” versus the “me” of the more individualistic Western societies): hence, being part of a group and meeting its standards becomes a fundamental step to be able to be considered as a full-fledged member of the community. You can see the effects of the Uchi and Soto principle in every social dynamic, from politics to economics. You can think of it as a system of concentric circles.

Let’s make an example:
You are a player in your University’s soccer team: in this case, the basic Uchi level will be represented by your teammates of the same age, while your Soto will be your captain and the manager of the team.
If you see it from a wider point of view, for example during a tournament, your Uchi will be your entire team, while your Soto will be represented by all the other competing teams.
Let’s make it a bit wider again, like during the University Games, on a national level: in this case, your Uchi is your entire University, and the Soto will be the other Universities, coming from other sides of the country.

This kind of cultural approach has also caused deep effects in sociolinguistics: how to properly communicate with people outside of your social circle? The answer to this question is keigo, the honorific speech. This fascinating, yet complex, part of the Japanese language developed through the generations, reinforcing the social construct where it originated from.

Keigo is composed by three types of language, each one with a specific set of rules and peculiarities, and its use depends on the context and the situation. Let’s check them out together. 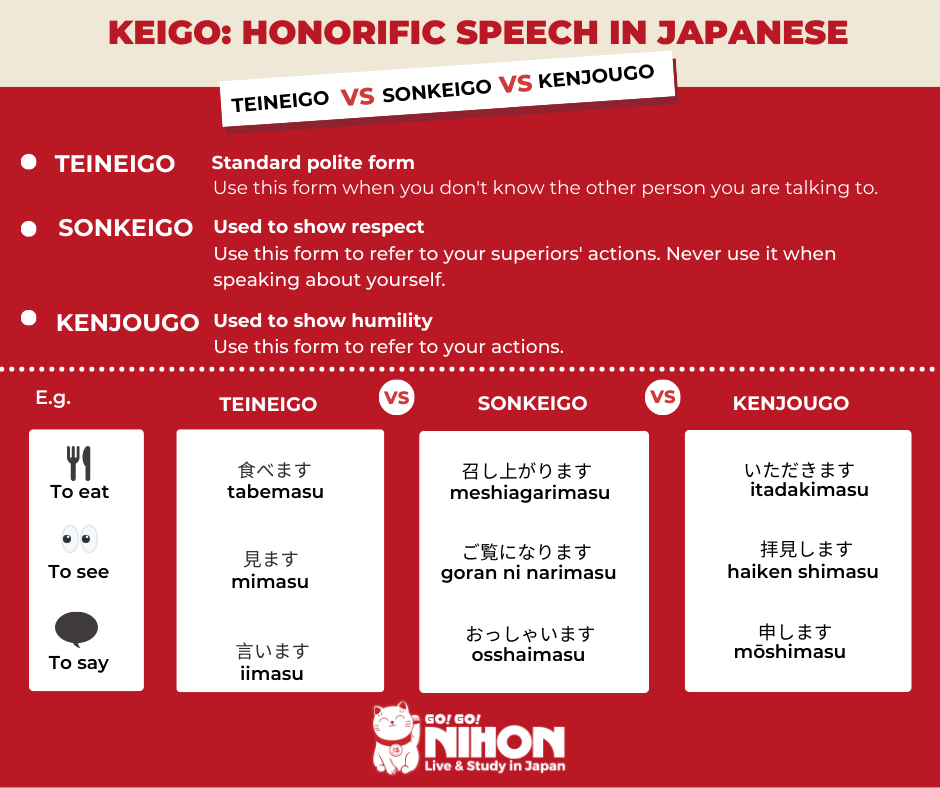 The different forms of Japanese keigo

Keigo (敬語) means “respectful language” and there are different forms of keigo depending on the situation and level of politeness needed: teineigo, sonkeigo and kenjougo.

Teineigo (丁寧語) is the standard polite form and usually the first form that Japanese learners learn in class. This form is used when the speaker doesn’t know the other person they are talking to or wishes to put distance between themselves and the other person.

In a sentence: what did you eat for lunch?
お昼ご飯何を食べましたか？(Ohirugohan nani wo tabemashitaka)

Sonkeigo (尊敬語) is used when you show respect to others in situations where you are talking about someone else who is a higher status than you, e.g. your boss, people who are older than you, your customers. You never use this form when speaking about yourself.

In a sentence: (serving at a fast food restaurant) are you eating here?
ここで召し上がりますか？(Koko de meshiagarimasuka?)

Kenjougo (謙譲語) is used to show humility. You use this form when you are speaking to a superior or someone of a higher social status about yourself, essentially making yourself humble in their presence.

In a sentence: (speaking to your boss) I ate ramen for lunch.
お昼ご飯にラーメンをいただきました。(Ohirugohan ni ramen wo itadakimashita).

Something to understand about keigo is that it is more than just another part of the Japanese language – it is deeply ingrained in the culture and society too.

While it might be normal to use casual language within reason to a stranger or superior in Western cultures, this is considered rude in Japan, where it is extremely important to show politeness, humility and formality. This is the culture of respect that permeates throughout Japanese culture. Status and hierarchy are important even in modern Japanese society, which is deeply influenced by Japan’s feudal history.

Note that Japanese also uses many honorifics to reflect the hierarchical system and it’s important to know these well, too.

Difficult to learn, but essential

The polite form of Japanese is used in Japan every single day, from store clerks addressing customers to an employee talking to their boss. Therefore learning keigo is highly important and useful for those who wish to work in Japan. Foreigners who can use keigo correctly will be seen much more favourably by potential employers.

However, it can be extremely difficult to learn keigo just by using a textbook or learning it in class – even Japanese people have to take courses to learn keigo before they enter the recruitment process.

10390
Study Trips Accommodations Advertise with us