Why study Japanese? Well let’s start with you. Why are you interested in learning Japanese? There’s a number of reasons why there’s a growing number of people interested in learning Japanese, and each have their own motivations. Having spent several years going to Japanese school with students from all over the world, I’ve met my share of language students.

Many of them first became interested in Japanese through manga or anime. Then there are serious gamers who gained an interest for the country by playing Japanese games. There are history geeks enthralled with the interesting changes through the eras; foodies obsessed with Japanese cuisine; engineers, artists, business people, language nerds and all sorts of people learning Japanese. No matter your background, you are likely to find peers in Japan who understand you.

I initially started learning Japanese because of my heritage. Having grown up in an area in the US without many Japanese or Japanese-Americans, I wasn’t so interested when I was young. I also wondered, what’s the point? Why study Japanese? But my parents, who are from Japan, tried to make me learn. But that’s the thing with kids – trying to make them learn something they’re not interested in is very difficult.

Throughout the years, I’ve come to learn how useful Japanese could be and how fascinating the language and culture of Japan is. Let me share with you some answers to the question: why study Japanese? 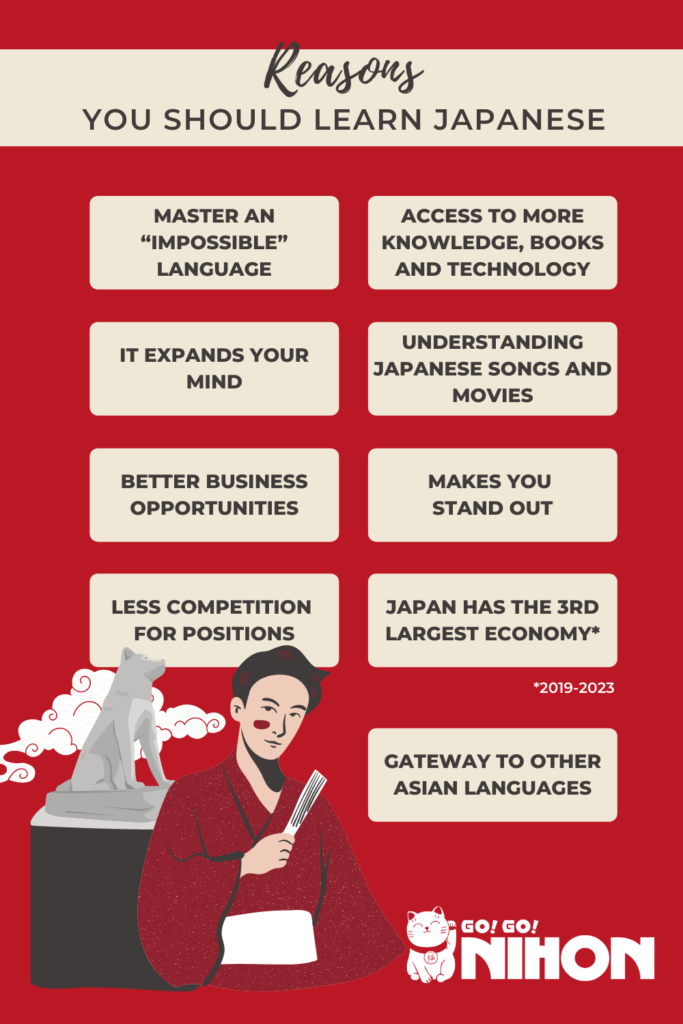 It’s one of the more difficult languages to learn, but can be a gateway language to other Asian languages. If you’re an English-speaker, Japanese will seem very different, for obvious reasons. The writing system is difficult as there are three different types of characters, and there are honorifics and different forms of speech depending on context.

It was really hard for me to differentiate at first. However, after learning Japanese I realised I could understand some things written in Chinese because of learning Chinese characters. It’s also been very helpful in studying Korean – which is what I’m trying to do now – because of the grammatical similarities.

Learning a new language (especially Japanese or other Asian languages) can open up a whole new world of literature, movies, music, games, anime, manga and other media to enjoy. The most popular media usually get translated to English. But, less popular Japanese movies or anime don’t get translated into English or their translations are not official and aren’t great quality.

Speaking Japanese is a way to get to know the culture better and get to discover a side of Japan you would have never been able to without the language.

2. It expands your mind

It opens your mind to different cultures. As an island nation, Japan has been isolated for much of its history. You can experience the unique culture through visiting, but learning the language itself really helps in understanding the history and the cultural differences.

For example, there are certain words in Japanese that can’t be translated into English or other languages, because of the uniqueness to the culture.

There may be similarities to other cultures as well as very different aspects. Learning about any culture will open your mind, but a culture very different from yours may do so even more.

If you want to open your own company in Japan, you will get more opportunities if you speak the language. As the second largest economy in the world for a while and now third by GDP, there are hundreds of billions of dollars spent by the Japanese on consumer goods and services. Its imports and exports are healthy and there are Japanese multinational corporations with branches around the world.

Being able to communicate well with potential customers, business partners, employers or vendors will be valuable in making your business grow.

Also, part-time jobs, internships, or working in Japan at the conclusion of your studies in Japan could be wonderful ways to complement your study abroad experience in Japan.

4. Gateway to technology and pop-culture

The Japanese are innovators. From Japan came bullet trains, the Walkman, blue LED light, pocket calculators, and android robots – just to name a few. If you’re into technology R&D, learning Japanese will open doors to that many more opportunities. Even if you’re not technically-minded, knowing Japanese will allow you to better understand the cutting-edge technology and use it to your advantage.

If you learn Japanese, you will be able to understand animations, movies, variety shows, news, and any mainstream Japanese media! This allows you to follow pop-culture, current events, history, and many other things in the original language, allowing for a deeper connection to Japan traditional and pop culture.

Being able to speak Japanese sets you apart from the rest of the crowd. If you’re coming from the Western hemisphere especially, popular foreign languages tend to be romance languages. Many English speakers will choose to study Spanish, French, Italian or German. It is more commonly offered in schools and is closer to English, thus, easier to learn.

By learning a less-commonly studied language, which is notorious for being difficult to  master, you may be able to benefit from unique opportunities, as well as being regarded as adventurous and hard-working.

Japanese people can be shy. Many primary and secondary schools in Japan teach  English. The majority of people in Japan have had at least minimal education in English. But even among those who are very competent in English, you will find that there are many Japanese who are reluctant to speak in English due to lack of confidence or being humble.

The Japanese are friendly but will appreciate it if you could take the initiative to talk to them in Japanese. Compared to learning a language from a country where many people speak English or another language, learning Japanese will enable you to communicate with many more people.

You can also meet many others from around the world as well. This can widen your perspectives on many different cultures, world issues and ways of thinking. With all the new friends you can make, it is also possible to uncover new job opportunities through connections with friends, and so on.

7. Enjoy all the exclusives

And in order to get your hands on these products from overseas, you’ll probably have to deal with a re-seller and might have to pay a premium for it. It means that the product itself is likely only offered in Japanese, so knowing the language will let you enjoy it to the fullest.

For manga fans, it also means early access to volumes that could otherwise take months (or even years) to receive an official translation. There is also something to be said about consuming media in its original language in the way that the author meant it to be. Suddenly, all those visual gags and puns make sense! 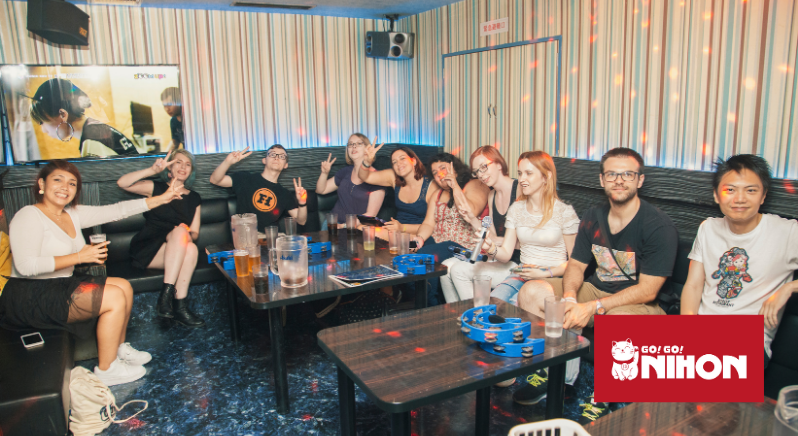 Japan is an ideal study-abroad destination. It’s common knowledge that one of the best ways to learn a language is by going there and studying.

Read more about why you should study Japanese in Japan in our article here.

Why study Japanese? Japan is one of the safest countries in the world, with low crime rates, secure borders and safe, reliable transportation systems. There are an abundance of things to do with variety of entertainment, arts, music, shopping, sports, traditional crafts, as well as modern technology. There’s a market to cater to almost anyone depending on where you go.

If these reasons have convinced you to come to Japan, then Go! Go! Nihon can help you choose schools and areas to fit your needs for an awesome study-abroad experience in Japan! Contact us today to get your Japanese-learning journey started.

64414
Study Trips Accommodations Advertise with us