You might not be familiar with the term “Ukiyo-e”, but there’s a good chance that you have seen the famous Great Wave of Kanagawa. This beautiful piece was created as a woodblock print and alongside paintings in this style, they make up the Japanese art style, ukiyo-e. The history of ukiyo-e in Japanese art

“Ukiyo-e” 浮世絵 means “pictures of the floating world” and is one of the best-known forms of Japanese art. It flourished between the 17th and 19th centuries and much of the work depicts elements of the entertainment industry that was popular with the merchant class of the era.

Subjects covered everything from Kabuki actors, travel scenes, depictions of folk tales, sumo wrestlers and beautiful women. The term “ukiyo” itself was originally used to describe the indulgences of the merchant class in kabuki theatre, the pleasure districts and geisha.

Ukiyo-e covers both paintings and woodblock prints in Japanese art. However, the prints were much more popular and made the work much more accessible and affordable to the merchant classes. Flat wooden blocks were carved out and covered in ink, then pressed onto paper to create a design.

The paintings followed the same style as the prints, but the prints could initially be much more labour intensive and were often produced by a team. The original artist of the design would be credited with the work, but there would be different craftsmen producing the wood carving, inking the block and printing.

Some of the biggest names in ukiyo-e are still known around the world today and have a lot of influence on other cultures.

Hokusai is famous for his great wave piece but he produced a lot more than just that. The piece itself is part of the Thirty-six Views of Mount Fuji collection created  around 1831. Much of Hokusai’s work focused on landscapes and nature. He is credited with broadening the subjects covered within the Ukiyo-e movement as he moved away from depicting Kabuki actors and courtesans.

Prior to this he also produced several collections of manga in its earlier forms and many consider his work there to be influential on the current forms of manga.

Hiroshige’s work was particularly influenced by the landscape work of Hokusai. But, he went on to be just as influential an artist in his own right within the movement. He was certainly prolific, producing over 8000 works in his life. His work was very travel-oriented and you’ll likely recognise many of his pieces as tranquil scenes from around Japan. He was another strong influence on Van Gogh, too.

One of the earliest artists within the movement was Hishikawa Moronobu. His work focused more on depicting beautiful women and courtesans and was originally more commonly in black and white. He popularised the hand colouring technique rather than layers of colour printing, which was how coloured ukiyo-e prints were typically created.

Kuniyoshi is often known for his depictions of samurai warriors and mythical creatures from folklore. He had a much stronger influence from the west compared to other ukiyo-e artists and incorporated some techniques of perspective and light and shading.

One of his more famous pieces is the triptych Takiyasha the Witch and the Skeleton Spectre. 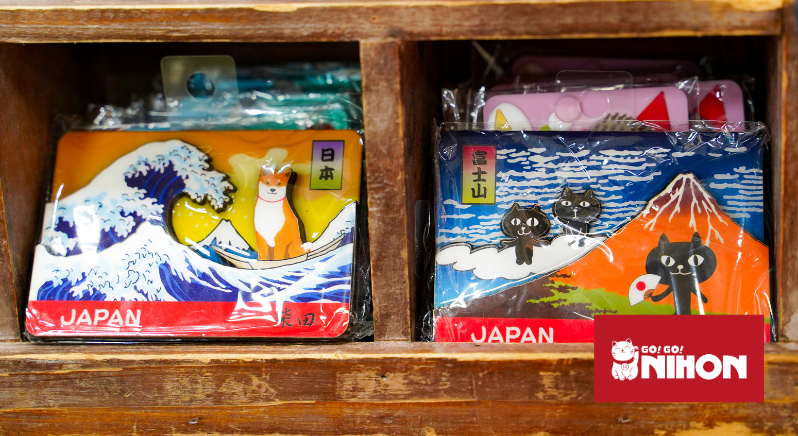 Japanese art and ukiyo-e influence around the world

In the 1870s Japanese culture made its way around the world and ukiyo-e was a big part of this. It had influences on the art of several impressionists and post-impressionists as part of the ‘Japonisme’ trend at the time.

Possibly one of the most famously influenced artists is Van Gogh, who supposedly took inspiration from the colour palettes as well as the style of composition of ukiyo-e. His almond blossom paintings certainly have many parallels with depictions of cherry blossoms found in many ukiyo-e prints.

More recently, the influence of ukiyo-e can still be seen around both globally and in Japan itself. In 2016 Seibu Railway company printed a series of train information posters in the ukiyo-e style to promote respect and consideration on their trains.

Companies like Uniqlo often use the prints and styles on some of their graphic t-shirts, which is not something you see as frequently with other styles of artwork.

While it can’t be claimed that ukiyo-e is directly responsible for the continued fascination with prints, it certainly played a part in the history of print work as a medium that makes art more accessible to the masses. Many print shops around the world help artists create reproducible, but unique, work albeit in a slightly easier way compared to carving out a woodblock. You might also say that we continue to depict the modern equivalent of the ‘floating world’ with posters of bands and actors on our walls.

Keep an eye out for its influences as you travel Japan, you might spot some unexpected influences!

Read more about another traditional Japanese art form in our article about shibori. For more insight into Japanese culture, read more on our blog.

2151
Study Trips Accommodations Advertise with us