The Sumō Tournament is an event that is famous around the world. A martial art that is all about brute force and using your weight to beat your opponent. But what exactly is it made up of and how do you get tickets?

A short history of Sumō

Sumō (相撲) literally translates as striking one another. It is said to have originated as far back as the 3rd century with figures of sumo wrestlers having been found from this era.

Much of the origin of Sumō is said to tie into the Shintō religion (神道) and is said to come from Shintō ritual dances where individuals would be wrestling with the gods or kami (神).

It has evolved over the years and has varied popularity depending on the different rulers of Japan and its regions but has ultimately persisted for many years.

It’s since taken its more modern form and has been around like this since about 1684. Obviously, this is still quite a while back and demonstrates how little has changed in this historic staple of Japanese culture.

Sumō wrestlers train together in heya (部屋) that are more training stables than rooms. Sumō wrestlers must be trained by former wrestlers which keeps the traditions passed through each generation of wrestlers. Each Sumō wrestler is expected to stay with their heya for most of their career and they can not fight wrestlers from the same heya in tournaments. 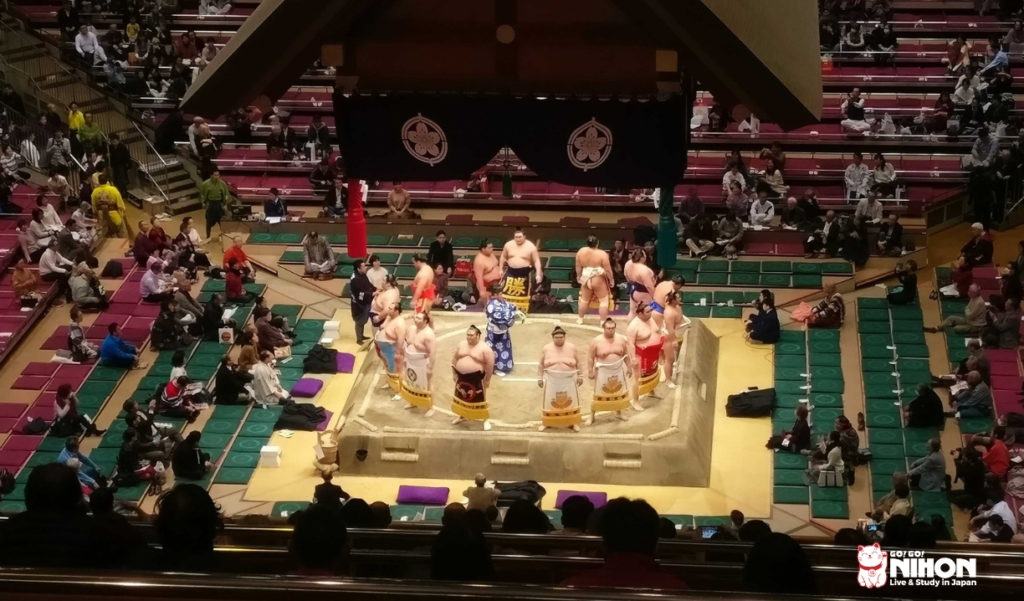 Sumō wrestling is ultimately a grappling sport and at its core, it’s quite a simple one. A Sumō fight itself consists of two rikishi (力士, wrestler) trying to force each out of a ring or to make the other touch the ground with a part of their body other than their feet.

The matches take place in a ring that is 4.55m in diameter and surrounded by a woven ring of rice straw. This dohyō (土俵) is on a raised platform of compressed clay.

There are not many rules but there are many rituals surrounding the sport though and as mentioned a lot of these have their origins in the Shintō religion of Japan. For example, the salt cleansing ritual used to cleanse the ring before a match comes from Shintō rituals.

Sumō wrestling is known for the size of the wrestlers and the rather distinctive outfits. These belt cum loin clothes are known as mawashi (廻し), depending on the level of the sumo wrestler and whether they are in a tournament or training, the colour and material of the mawashi may change. The material will be either cotton or silk and the colour may change depending on ranking or the superstitions of the wrestler hoping to bring themselves good luck in a tournament. When out in public they are required to wear traditional Japanese dress although again this may vary depending on their ranking.

Each year there are 6 official tournaments, three in Tokyo at the Kokugikan arena and then 3 around the country, one in Fukuoka, one in Osaka and one in Aichi. The Tokyo rounds are in January, May, and September. Each tournament lasts around 15 days though, so there are plenty of chances to get to a match over this period.

The best place to buy tickets is the official Kokugikan website, they also list the release dates for each of the tournaments and it’s worth keeping an eye on this as they sell out quickly.

Prices can be around ￥3800 for an arena seat, depending on the venue. If you want to splash out and get a box it will cost you around ￥38000!

Don’t worry, there are other ways to see sumo wrestling. If you’re hanging around Ryōgoku 両国 in Tokyo, you can head down to their training grounds. There are some heya where you can watch the early morning training rituals also known as keiko (稽古), for free. This varies from heya to heya though so please check before you set out.

Alternatively, there is often a spring tour that travels around several prefectures. While the dates and broader locations are listed and there is a schedule for the days there’s not much more information and you’ll need to phone a Japanese line to get the information. We recommend grabbing your new Japanese friends to give them a call or if you’re feeling daring, you can practice your Japanese.

If you completely miss out then why not explore the Sumō Museum at the Ryōgoku Kokugikan on the 1st floor and then wander around the Ryogoku area eating the food of the sumo wrestler, chanko nabe ちゃんこ鍋 and lots and lots of gyōza 餃子 (dumplings).

Our 2-week Tokyo Essential Study Trip, in January, gives you the opportunity to taste chanko nabe with your fellow Study Trip participants in a famous sumo restaurant. In the middle of the restaurant is a sumo ring used by retired sumo wrestlers, musicians and performers who will entertain you during your meal.

Tags: things to do, tradition

2942
Study Trips Accommodations Advertise with us