When you first move to Japan, there’s a lot of things that need arranging but the first step is to set up your new home. There’s everything from sorting bills to buying a lot of fixtures and furnishings, and what’s the most important part of any home? The bed of course, and in Japan that means a futon bed.

What exactly is a futon?

To many westerners, a futon bed conjures up images of a cheap wooden=slatted sofa that turns into a bed, but this couldn’t be further from the traditional Japanese futon. The traditional futon (布団) is made up of three parts, the mattress, shikibuton (敷き布団), the duvet, kakebuton (掛け布団), and the pillow, makura (枕). The mattress and duvet are made of cotton which is a good insulator and means that you’re kept cool in the summer and warm in the winter. The pillow is traditionally filled with beans.

When making the bed, the parts would be laid out directly on the floor. As the floor is often tatami (畳), a soft panel made with a core of rice straw or polystyrene, covered in woven rush straw. This makes it much softer and more comfortable to sleep on directly as the tatami has a slight ‘bounce’ to it, unlike wooden floors.

Whilst there are many differences when compared to western beds, one of the biggest is that the futon is packed away each morning. Japanese houses are known for being small and compact, and space is often at a premium. As such, the futon bed in Japan is designed to fold away neatly and along with the duvet and pillow, it is all put away in a large cupboard or wardrobe so that the room can be used for other activities during the day.

The history of the futon bed in Japan

It is said that the futon evolved from when people would sleep on mats that they would roll out. As with property now, there was little space and families would often share rooms, leaving little space to sleep.

Originally it was considered that only rich noblemen would have padded futons rather than mats as they were costly to produce and there was no large-scale manufacturing. It was only in the 18th century, when cotton was more widely available and as scales of production grew, that the futon as we recognise it today became more widely used throughout the population.

Over the last century as the popularity of the futon spread globally, it became more westernised for these new markets. This is where the wooden frame comes in, adapting to the different environments that it would be used in. Tatami flooring is not common outside of Japan and the wooden frame was introduced to deal with the harder flooring and general western sensibilities. However, the futon remains unchanged for the Japanese market. 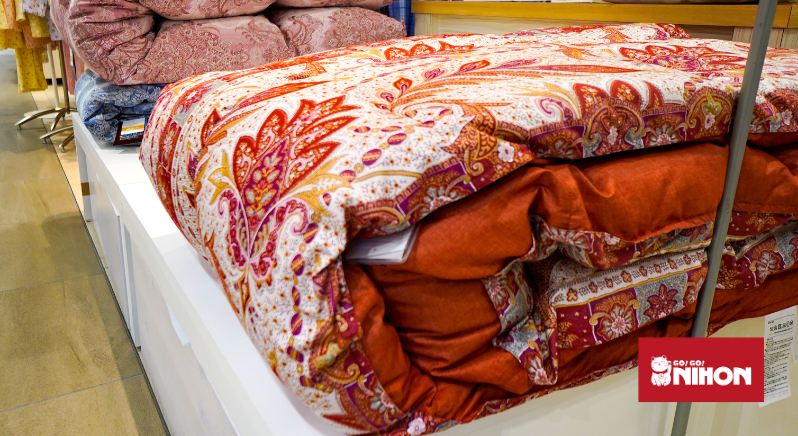 Looking after your futon in Japan

If well looked after, futons can last as long as 15 years and need replacing less frequently than a western mattress. However, it is important that you care for them properly to ensure they last this long and, just as importantly, stay comfortable.

It’s a common sight to see both the shikibuton and kakebuton hanging outside of peoples houses or on their balconies to air them out. To reduce the chances of dust mites or bugs it’s also common to beat them. Traditionally, people would use a futon tataki  (布団叩き), a thin tatami mat on a stick to beat them, although you can improvise if you can’t get hold of one at your local 100 yen store.

Of course, there are also plenty of other handy Japanese inventions to keep your futon in top condition. For instance, during the rainy season, it’s difficult to get things dry, but you can use a futonkansōki (布団乾燥機), that blows warm air into the futon to dry it out. It can also double as a heater in the winter to warm up your futon before you go to bed for a cosy nights sleep.

Now you know the ins and outs of a traditional futon bed in Japan, you can settle down for a peaceful nights sleep zzzzZZZzz.

43258
Study Trips Accommodations Advertise with us