Even if you’re not interested in games or toys, it’s near impossible to live in Japan and not see gachapon. These small plastic capsule toys are a common sight, filling up special gachapon machines that are everywhere in Japan.

But what is a gachapon toy? And why are they so popular? Read on to learn all about what gachapon is.

Gachapon ガチャポン, also known as gashapon ガシャポン, are toy dispensers that resemble Western toy vending machines. You insert a coin, usually between 100 to 500 yen, and turn the handle to release a capsule. It’s all luck of the draw in terms of what you get, but the toy inside will be a quality collector’s item. 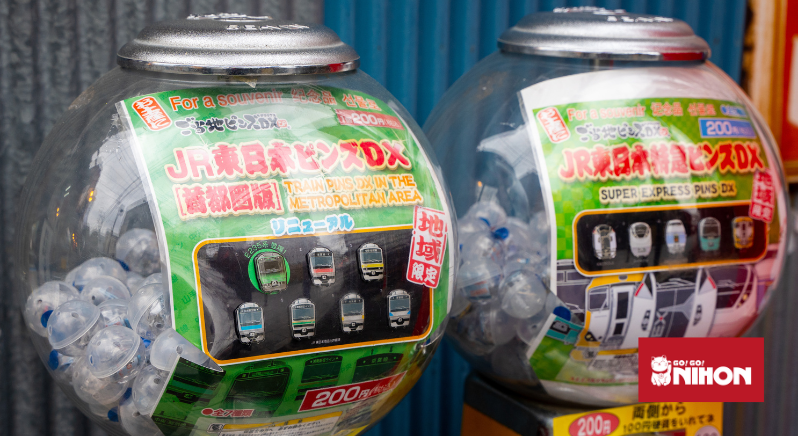 The history of gachapon in Japan

The gachapon machine we know today first came to Japan in the 1960s. A man named Shigeta Ryūzō 重田 龍三 modified an American vending machine so that it would be able to dispense toys encased in a plastic shell.

The popularity of gachapon skyrocketed once Bandai Co trademarked the name “gashapon” and created toys of existing popular brands. Bandai Co’s gashapon machines were extremely popular, even though they were much more expensive than other brands.

Where to find gachapon

Nowadays, you can find rows and rows of gachapon machines in arcades, games stores, anime/manga shops, train stations, themed cafes – basically, all over the place!

What can you get?

As mentioned, the toys inside gachapon are usually desirable collector’s items. Nothing is a guarantee when it comes to the machines though, but that’s a big part of the fun.

There are some more “unique” toys out there, such as a corn engagement ring, sniper sparrows, and money handkerchief.

The issue of waste and sustainability

While gachapon are a beloved part of life in Japan, it’s undeniable that they create a lot of plastic waste. The toys are encased in a plastic ball, which is usually discarded. Sometimes there is a basket to place the cases in after you open them. But if there isn’t, they will need to be thrown out with the right type of rubbish.

The makers of these toys are aware of the issue and are making some attempts to reuse the plastic waste. Bandai Co has been recycling empty casings since 2006. In September 2021, the company started a capsule recycle program where they collect empty cases and mix them with new material to produce recycled capsules. And earlier in 2022, the company stated it would begin recycling plastic shells and reuse them for new shells.

Another toy company, the TOMY group, is also attempting to reduce its plastic waste production by creating smaller gachapon cases.

The bigger problem of plastic waste

Although Japan has a comprehensive waste management system and an official plastics recycling rate of 84%, most plastic waste is either dumped or burned due to low quality and the sheer volume of it. Burning, or “thermal recycling”, generates energy, but the emissions it creates is damaging for the environment.

Small changes have been made in recent years to reduce plastic waste. In 2020, supermarkets, department stores and convenience stores started charging a fee for plastic bags. In January 2022, an ordinance was approved by the Cabinet for businesses to reduce the use of 12 types of disposable plastic items. Those targeted could include operators of convenience stores, supermarkets, restaurants, hotels and laundries.

Read more in our article about sustainability in Japan, including some ways to reduce your plastic waste while living in Japan. Whether you’re a gachapon fan or not, living and studying in Japan will give you access to all the toys and pop culture memorabilia you could ever want. Take language lessons during the day and wander through the stores in Akihabara on your way home. Or take the train to Tokyo for a weekend and get your hands on the latest collector’s items.

We have schools all over Japan that offer courses catering to all levels. We’ll help you with your application, as well as with finding suitable accommodation and getting settled into your new life in Japan.

Contact us to apply to live and study in Japan!

613
Study Trips Accommodations Advertise with us