With the New Year around the corner, why not take a chance and grab a lucky bag in Japan? Fukubukuro (福袋) or lucky bag is a tradition on New Year’s Day in Japan where merchants of all kinds pack bags with goodies and sell them at a significant discount.

The practice began as a way to get rid of leftover merchandise, but soon became a highly anticipated end-of-year event. People will line up for hours to test their luck to get their own lucky bags. Everything is fair game with lucky bags: you can snag discounts on clothing, concert tickets, jewelry, sweets, electronics, and more.

Let’s break down the kanji. Fuku (福) means good fortune or good luck, and fukuro (袋) means “bag”. When put together, it’s easier to pronounce by changing the f in fukuro to a b: fukubukuro. The fuku comes from the Japanese saying that “there is fortune in leftovers” (残り物には福がある), making lucky bags in Japan an opportunity to get a bit of fortune for oneself, while enjoying the rush of discount shopping.

Where the lucky bag tradition began

Many believe that the first lucky bag in Japan was sold at a department store. Some believe it first appeared at Ginza Matsuya Department Store in the late Meiji period. Others believe it was at Echigoya, the predecessor of Mitsukoshi, who started selling the trend in the Edo period. Regardless of where it began, it was quickly apparent that packing and selling lucky bags in Japan were a hit for both retailers and consumers, that the practice took off nationwide.

While they all contain different items, one thing is for sure: everything inside the bag is much, much cheaper than its retail price. Most bags range from a few hundred to ten thousand yen. However, every year there are also a few extremely expensive fukubukuro available. The record-breaking fukubukuro was priced at priced at 200.6 million yen (1.7 million USD) at a jewelry store in Ginza. 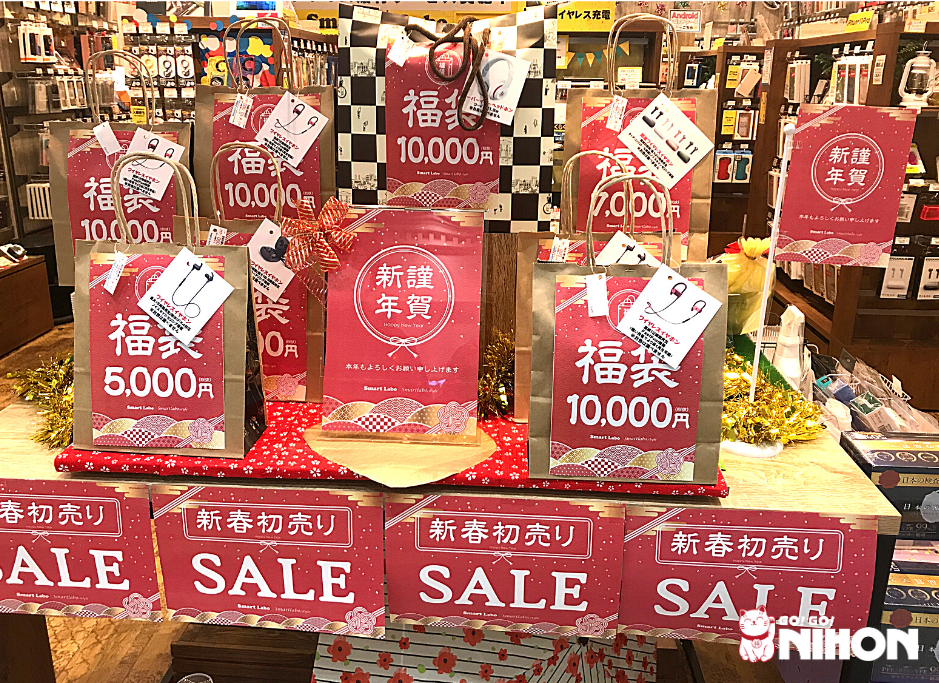 In major department stores, grab bags are usually themed to specific departments. At a clothing store, you can expect to find clothes. If it’s a toy store, you can expect to get toys. To stir up even more excitement and entice shoppers, stores will include surprise extra items such as luxury items. You can also get items that can’t fit inside a bag like like electronics, vacations, and even automobiles. Instead, merchants will place vouchers for shoppers to later redeem. Depending on where you go, lucky bags are sold at various price points.

Part of the fun when buying lucky bags in Japan is the surprise of what’s inside. The tradition is to pre-seal all the bags, so that shoppers can test their luck. Some retailers do reveal all the contents beforehand to ensure no disappointments and guarantee shopper satisfaction. Worst comes to worst, even if you do end up stuff you don’t like, you can always trade — many shoppers will open and trade items with other customers right on the spot.

As for the logistics, getting a lucky bag in Japan can get crazy depending on where you go since they’re often first-come, first serve. At popular shops, like high-end department stores and electronic stores which sell generously packed fukubukuro, you can expect to see hundreds and even thousands of shoppers eagerly waiting, so it’s best to arrive early. Expect to nudge your way through crowds, but this is also part of the fun.

While the New Year officially kicks off on January 1, some stores don’t begin their lucky bag sales until January 2. Be sure to research and jot down the dates. Some might only sell a certain amount of lucky bags per day, other stores might even offer the option to order a bag online to pick up later in store. For the shoppers who are indecisive or willing to wait to take the leap, monitoring hashtags on social media like #福袋 or #brandname, can provide quick glimpses of what people are receiving.

Whether you decide to play it safe and shop at your favorite stores, or take a gamble, taking part in fukubukuro tradition is an enjoyable way to ring in the New Year.

For more information about Japanese culture, make sure to follow our Go! Go! Nihon blog, where we cover everything you need to know about life in Japan.

4336
Study Trips Accommodations Advertise with us