It’s early morning, and by luck, you’ve come on a day everyone seems to be busy doing anything else. Walking up the steps, you glance to your sides and notice two large fox statues, keys in their mouths, silently staring as you walk by. You drop your gaze just a bit, as if to ask permission for entry from two inanimate statues greeting all those visiting the Fushimi Inari Shrine.

As you walk under the first of thousands of torii gates (鳥居), you glance at your watch. It doesn’t matter anyway. It’s a couple hours to the top, but chances are it’ll be longer when on a whim (or was it planned?) you decide to take forks in the road to tucked away shrines.

Before entering a shrine, you take your turn at the basin and methodically cleanse yourself: right hand picks up the icy water with a scoop and pours it on the left, switch hands and repeat. The scoop goes back into the right and pours water into your left, then you take a sip and wash your mouth. Finally, turning the scoop up to let the water pour down the handle, you place it gently back on the basin.

Sunlight struggles to find its way between the tightly packed gates, watching in envy as you pass through easily. After hours of walking, you finally find your way to the top… 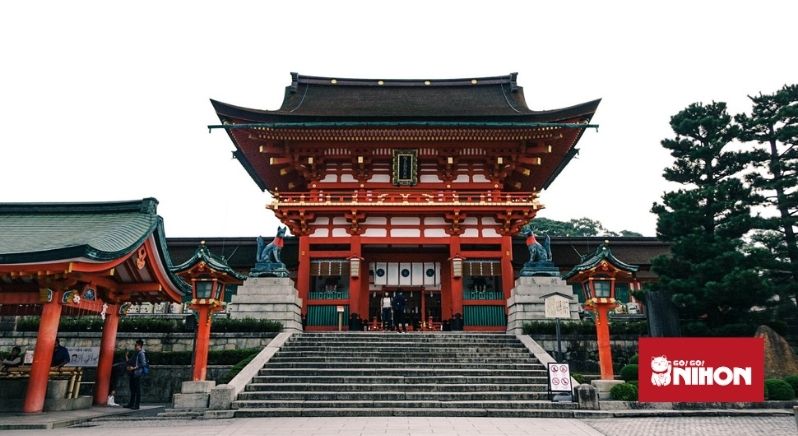 The history of the Fushimi Inari Shrine

According to ancient shrine texts, Irogu no Hatanokimi enshrined three deities in three mountains on the first day of the second month of 711. On that year, farmers were blessed with abundant harvests and silk.

Inari (稲荷), the god of harvests, or the god of rice, was an extremely important deity in ancient Japan’s agricultural society. Over the centuries, as Japan changed from agriculture to industry, the shrine too changed from providing luck in farming to providing luck in business. It’s because of this that merchants and manufacturers have been worshipping Inari for ages.

As you walk under the vermillion gates, you’ll notice each one has been donated by a Japanese business—thus the Kanji across the wood. It’s not only in Kyoto that you’ll find an Inari shrine. There are around 30,000 sub- shrines throughout Japan.

Visiting the Fushimi Inari Shrine opens a huge world of torii that cover an entire mountain in Kyoto. There are shrines, places of worship, and cemeteries scattered amongst the forests of trees and bamboos. Visitors should take the time to soak in all the history and spirituality that exists here. 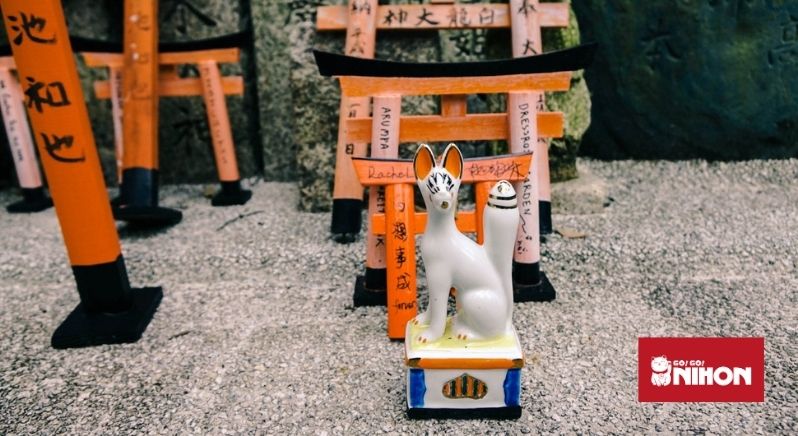 What it all means

One of the first things visitors will notice is the abundance of foxes throughout the shrine. Two large, imposing foxes on either side of the main gate guard the entrance. The keys in their mouths are the keys to granaries. These sacred animals are the messengers of the god of rice, Inari. Japanese traditionally also see the fox as mysterious figures with the ability to possess humans. Supposedly, the point of entry is under the fingernails, so keep those hands clean when passing through the gates! You wouldn’t want foxes to have to deal with dirty fingernails when they’re busy taking over your body, would you?

Torii—literally meaning bird abode—is the iconic Japanese gate found at most Shinto shrines. To pass through is to shift from the everyday world into the sacred and spiritual. Inari shrines in particular tend to be overflowing with gates because those successful in their business ventures go on to donate a torii in a gesture of reverence. On Japanese maps, Shinto shrines can easily be spotted by the small torii sign. 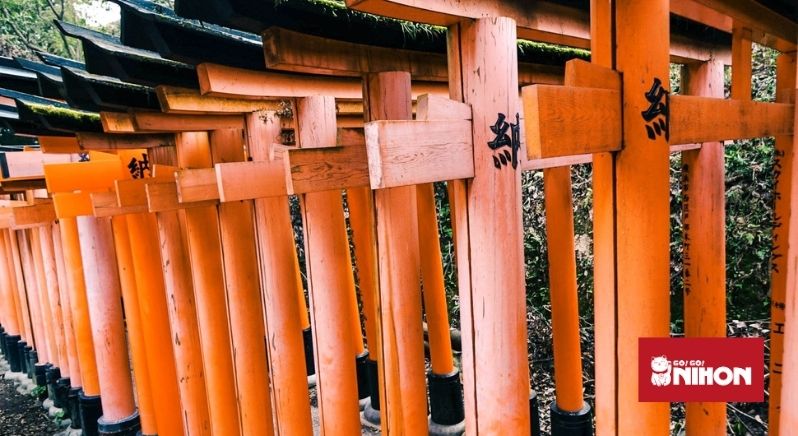 Right outside the JR Nara Line Inari Station and a short walk from the Keihan Electric Railway Main Line Fushimi-Inari Station, the shrine can easily be found both by size and by the people. It’s better to go in the early mornings to beat the crowds, though those looking for events can easily find something going on every month throughout the year. On January 5th, there is Oyama-sai, where both a shrine and mountaintop ceremony is held.

Perhaps one of the most important is Hatsūma Taisai on the First Day of the Horse (in February) according to the Asian zodiac calendar. This is the anniversary of the establishment of Fushimi Inari Shrine, and thus visits on this day are blessings visits. This day has been recorded in poetry and literature since ancient times, so it wouldn’t be something to miss. Archery events, rice plantings, purifications, and harvest festivals abound. Curious visitors can take a quick peek at the shrine’s website for a calendar of events.

I had the chance to visit the Fushimi Inari Shrine on a chilly autumn day when the leaves were changing from a vibrant green to a soft orange and red in preparation for the snowy winters. I spent hours and hours under the gates, just like those around me and perhaps those did thousands of years ago. I hope you’ll get the chance to do so as well.

5388
Study Trips Accommodations Advertise with us