If you’re a Japanese learner, you might have already come across words like rashii らしい, sou そう, mitai みたい and ppoiっぽい. These words are used to express “seems like” or “looks like”, or to express hearsay. So what is the difference between rashii, sou, mitai, and ppoi?

In this article, we’ll break down each one so you can talk about observations in Japanese like a pro.

How to say “seems like” in Japanese with rashii (らしい)

Rashii is used when reporting hearsay or to make a judgment based on a situation. The main differences between rashii and sou are in the ambiguity and sources of information. Rashii is always based on other’s opinions or an unknown, ambiguous source. Sou can come from your own observations or from a source you can identify (i.e. someone you heard, or an article you read).

Rashii is used more commonly in casual situations where sou would feel too formal. Think of rashii as “the word on the street,” or as a common opinion like “they say…”

A popular musician is playing a show in town. With all the buzz surrounding the concert, you’ve heard the tickets might sell out. You might say:

You’ve never seen her but it’s a common rumor that Asuka is the fastest runner on the track team. You might say:

Remember that in Japanese grammar, we don’t use rashii if you’re expressing your opinion directly. Use this expression to point out a general opinion or consensus on a matter.

How to say “seems like” in Japanese with sou (そう)

Sou is used to makes judgments based on appearances. If you can’t be totally sure of something, make an educated guess with sou. One of the most common sou phrases you hear a lot in Japan is “it looks delicious!” When looking through a menu or a steaming bowl of ramen lands on your table, you can say:

If the sky is dark and cloudy but you didn’t see the weather forecast you might say:

You see a trailer for a new movie you’ve been waiting to see. It looks like a lot of fun:

The key to remember is that sou expresses your judgment on something you haven’t experienced yet. It’s just your opinion or an educated guess based on the looks of things. 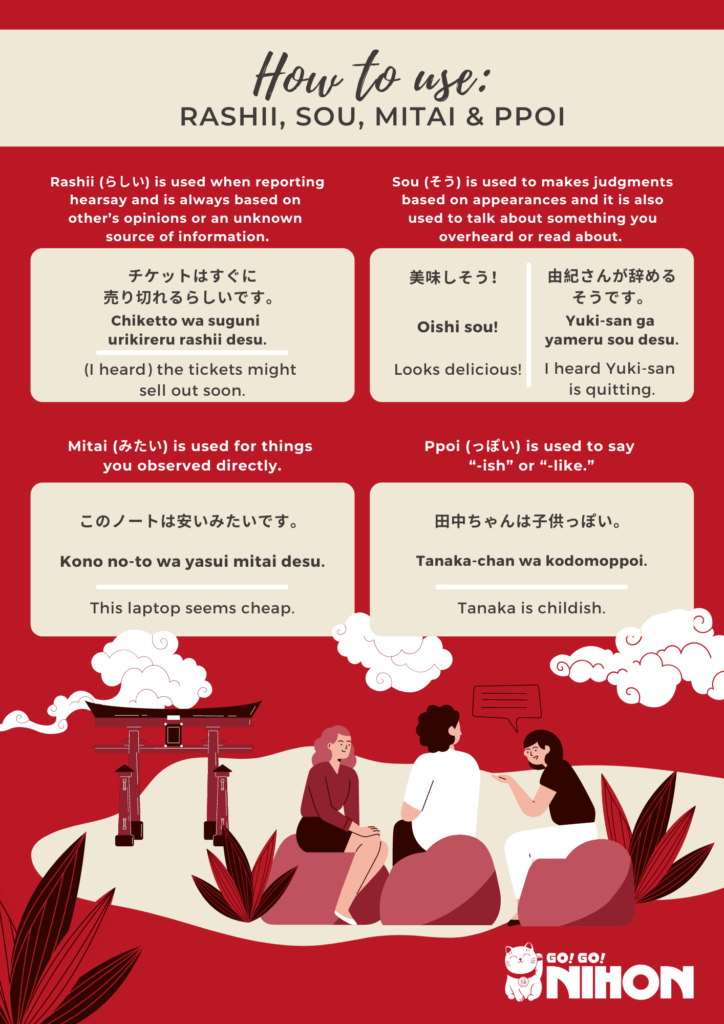 How to express hearsay in Japanese with sou (そう)

You can also use sou to talk about something you overheard or read about. When using sou in this way, add it to the end of a complete sentence in casual speech form.

You overheard that a coworker quit the company from a third party. You can say:

You overheard a former student say your teacher’s tests are difficult. You can say:

You read an article that said the beaches in Thailand are beautiful. Note that na-adjectives need だ connected to そう. You can say:

How to say “looks like” in Japanese with mitai (みたい)

Mitai is used for things you observe directly. Mitai expresses more certainty than sou or rashii since you saw it yourself.

For example, if you saw a co-worker smiling at their desk as you passed by, you can say:

Or if you’re shopping for a laptop and see a model for much less than you’ve seen elsewhere you might say:

You might also see you よう used instead of mitai. In Japanese grammar, there’s no difference between you and mitai. But, you is a more formal expression. You’ll often see this in writing instead of speech. Here’s an example of “this jacket looks expensive.”

彼は今忙しいようです。
Kare ha ima isogashii you desu.
He looks busy at the moment.

Ppoi is used to say “-ish” or “-like.” This expression is making a direct comparison with certainty. Where mitai means “it seems / looks like” based on appearances, poi says “it is” a certain way.

For example, your friend Tanaka is acting really immature. You might say:

Or you’re shopping and spot a cheap-looking jacket. You can say:

Note that っぽい is used conversationally and not in formal situations. 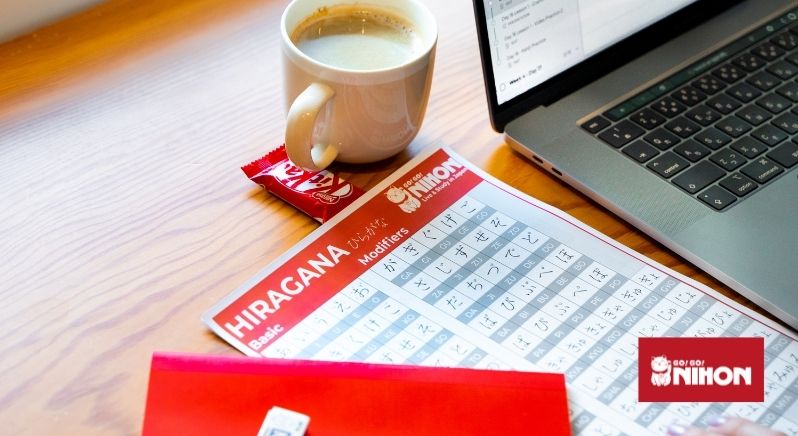 Now that you’ve learnt more about the difference between rashii, sou, mitai, and poi, why not continue learning more Japanese? Contact us for information on how to get your Japanese language skills to the next level.

Or check out our 12-week online beginner course. Get 12 weeks of detailed lessons you can take at your own pace. Hear real feedback from our instructors to reach your language goals faster. We also have other online courses to suit various levels and interests.

2517
Study Trips Accommodations Advertise with us