Celebrating New Year’s in Japan isn’t complete without taking part in the traditions, including enjoying a traditional Japanese New Year’s meal. Called osechi-ryōri (お節料理), this meal is all handmade, with each piece thoughtfully added with meaning in order to ring in the new year.

Read on to learn more about osechi-ryōri, the Japanese New Year’s meal full of history and culture. 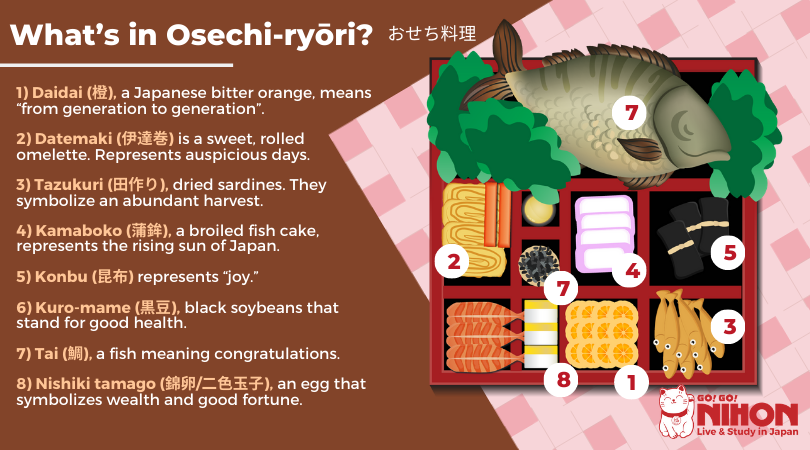 Where did this Japanese New Year’s meal come from?

New Year’s Day was one of the original five seasonal festivals in the Imperial Court in Kyoto, so you know this was a big day. The first three days of the New Year were sacred and it was taboo to use a hearth to cook meals, save for ozōni (雑煮), a traditional soup made with rice cakes. Since women didn’t cook during the new year, osechi-ryōri was usually made before the first day of the new year.

Traditionally, osechi-ryōri was only made up of vegetables boiled in soy sauce and sugar or mirin 味醂 (a sweet rice wine used for cooking). As times changed, so did the variety of osechi-ryōri.

Nowadays it basically means anything made for the New Year, be it fried foods, handmade foods, or takeaway foods. Those pressed for time can head to specialty stores, grocery stores, or even convenience stores to get ready-made osechi-ryōri packaged nicely in bentō boxes.

A particularly staple part of osechi-ryōri is called toshi-koshi soba (年越し蕎麦), a particular kind of soba eaten on New Year’s Eve. The noodles are usually uncut and left long, symbolising a long life with good luck. If you happen to find yourself in a Japanese household on the 31st and slurping up those delicious soba noodles, just remember: it’s considered bad luck to leave any toshi-koshi soba uneaten. 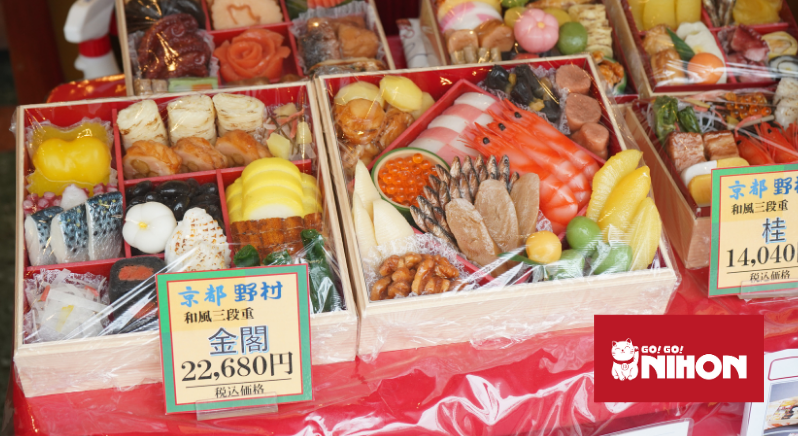 What’s in this traditional meal?

Osechi-ryōri varies from region to region, or even household to household in Japan, based on where you are. Regardless, know that every item has a special meaning according to the way it’s written in kanji. Think of these things as a pun, of sorts.

These are just examples and there are plenty more meanings that go along with it. Foods will vary with each region, which is just more reason to visit each one and see what they mean! 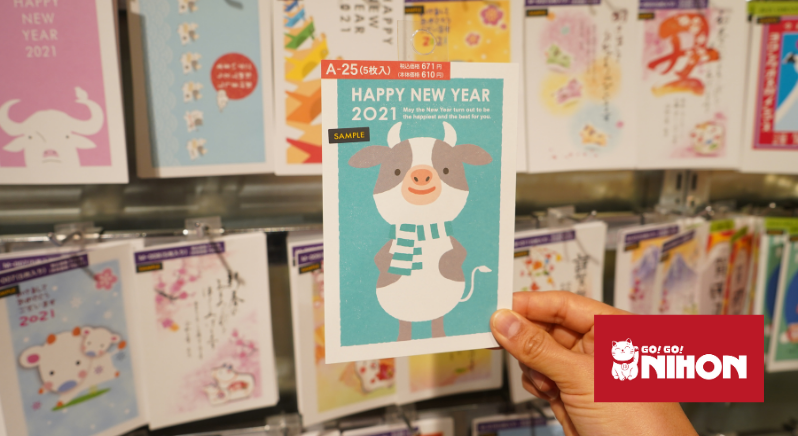 The Japanese New Year is one of deep importance. It’s filled with good food, but it’s also a time for loved ones to return to the homes where they were born. They will see their parents and grandparents and take more calculated, spiritual steps to ring in the new year.

Whereas Western cultures tend to spend Christmas holidays with their families. Japan feels like it calms down in a more introspective manner over the New Year’s holidays.

Apart from visiting temples and eating traditional foods, nearly all Japanese people can be found writing handwritten postcards to family and friends around the world. They’ll spend hours upon hours handwriting names and addresses (or at least printing them out in a way that looks like they were handwritten!) as a gesture of remembrance for those in their lives. Children also line up to their elders to get otoshidama お年玉 (little red envelopes filled with money).

Nowadays, with less time and more access to convenience, stores will often prepare osechi-ryōri for families before the New Year. Expensive, high class establishments can make family meals for $500-$1,000 each, while the usual runs from $100-200. There are still plenty of families still hand-making these wonderfully thoughtful meals though.

6247
Study Trips Accommodations Advertise with us