Japanese folklore encompasses a wide variety of mythical monsters yōkai (妖怪), some scary, some lucky, and some a bit more on the mysterious side. Amongst these is the Tanuki (狸), or Japanese raccoon dog. It is indeed what it sounds like! Not to be mistaken with the image of a typical raccoon, the Tanuki is actually an unrelated animal with somewhat similar physical features.

Legend has the Tanuki tagged as both mischievous and jovial, a shapeshifter that changes for reasons different than the sly fox, who changes its form in order to deceive humans. If you’ve wandered Japan’s streets before, you’ll have seen these statues of these creatures perched outside of izakaya, homes, and everyday shops. They all look similar: a hat, a big smile, a big belly, and a big scrotum. That’s right, a big scrotum. Curious, yet? Let’s find out why! 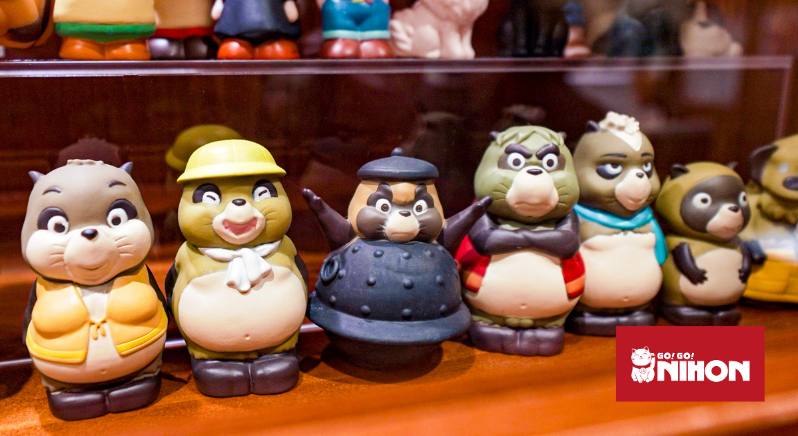 The story behind these guys

For Studio Ghibli fans (Princess Mononoke, Spirited Away, Totoro, Castle in the Sky, etc.), Pom Poko is another classic showing a glimpse into the life of this rascal, fun-loving raccoon dog. The story follows a group of raccoon dogs who face the loss of their homelands through urban development. Those that give in and shapeshift to adapt to human society leave behind others who have forgotten their powers of illusion, and the story sends an important message about protecting what’s left of tanuki land.

Originally believed to be god-like and controlling nature, the introduction of Buddhist culture into Japan stripped them of their powers, as they were not animals deemed as messengers of the gods. It was around this time that, along with the mythical stories of the fox, tanuki were demoted to somewhat malignant, somewhat foolish and humorous animals.

First appearing in the Nihon Shoki (Nara period, 720 AD)—which contains the most complete historical records of Japan—as well as the Nihon Ryouiki (Heian period, 787-824)—a collection of Buddhist legends and folktales—the tanuki were recorded as transforming into men and singing songs. Due to Japan’s history of separated states, tales vary from region to region. Danzaburou, a raccoon dog on Sado Island, drove out the foxes. In Awa Province of what is now Tokushima Prefecture, a great war went on between tanuki powers.

Over time, the tanuki has transformed into its now more comical role, which most likely happened during the Edo period. It has an anthropomorphic body, big belly, and a hat on its head which was once a lotus leaf. This could be due to ancient Chinese legends which had the fox donning a human skull on its head in order to transform itself. At about the 19th century, the leaf turned into the classic straw hat monks used to shelter themselves from the elements. Other notable traits include big eyes to help make good decisions, a big tail for strength, a letter for trust, a sake bottle for virtue, and of course, a gigantic scrotum.

Meaning of kin no tama

In the old days, metal workers in Kanazawa would take golden nuggets and hammer them down to the thinnest gold leaf possible. By using the very malleable raccoon dog skin, they would stretch it over the nuggets and hammer away until they achieved their desired sheets. In Japanese, these small balls of gold (literally kin no tama, 金の玉) became a pun for testicles (金玉, kin tama). Tanuki pelt wallets were sold as lucky charms that could stretch money the way they stretched gold. This is why they often sit outside of stores, as a symbol of bringing in wealth.

These tricky animals are known to pass off leaves as illusions for money in exchange for goods, and so the statues outside these shops can be a way of showing that one of their kind has already pulled this trick at this certain store.

Whatever the meaning, these comical looking creatures are everywhere in Japan, along with maneki-neko. Come take a tour and see what other mythical creatures you can find in Japan’s streets!

26643
Study Trips Accommodations Advertise with us