You may have noticed Go! Go! Nihon’s mascot, the cute cat with its paw in the air, waving at visitors from its spot next to the logo (at least to most Westerners it’s waving, but we’ll get into that later). Over here in Japan, this particular character is called Maneki Neko (招き猫), and its interesting history goes way back. 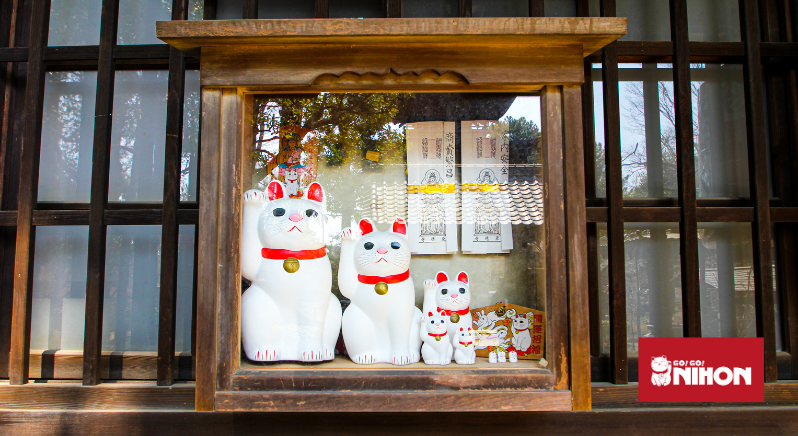 The many varieties of Maneki Neko

Maneki Neko can be found in most Japanese shops and homes, sometimes having one or both paws raised—though usually just one. In Japan, a beckoning gesture is done by holding the hand up, palm down, and waving their hand downwards toward them—just like Maneki Neko likes to do. Interestingly enough, this may look like waving (or even shooing away) to some Westerners. It’s what I first thought over here when I saw a teacher beckoning me over to his desk!

Westerners usually attribute a beckoning gesture with the palm up, and a waving motion towards their body. This is why some Maneki Neko made for Western markets will have the cat’s paw facing upwards. On a similar note, when I first moved to Japan and spoke no Japanese, my boss tried to explain something while tapping his nose.

I thought he was telling me something was “right on the nose,” or perhaps he had something wrong with his nose, when really all he was saying was “me.” It turns out people in Japan tend to tap their nose when they refer to themselves. In the West (or at least in my experience) “me” is usually done by tapping one’s chest.

The most popular belief is that a raised left paw beckons customers to come into the store or home, while a right paw brings in wealth and luck. Some argue and say it’s the opposite, some say one paw is luck and the other wealth, and some even say that a left paw is for money while the right paw protects the money. Whatever the difference in opinion, it’s believed that the higher the paw is raised, the better the luck.

The most popular cat color is calico, which represents luck. Following that is white (happiness and purity), black (warding away evil spirits), and gold (financial fortune). Green and blue are for  academic endeavors, and pink is for love. Sometimes these cats are holding gold coins, called a koban (小判).

This monetary unit dates back to the Edo period of Japan, when money was ryō (両), not yen. Most Maneki Neko can be found holding tens of millions worth of ryō. In short, it’s a lot of money, symbolizing the bringing in of good luck and wealth. Sometimes people leave coins on Maneki Neko, just like how some people throw coins into a fountain or pond. 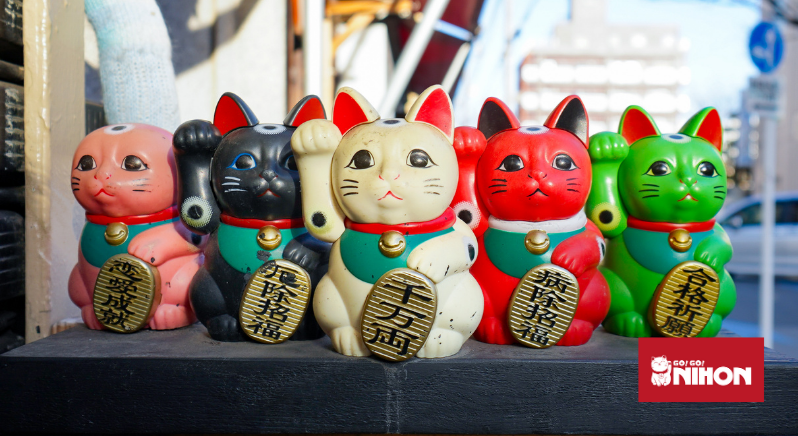 But why a cat? Where did it come from?

Maneki Neko’s history is a long and somewhat convoluted one. Depending on whom you ask its origin and meanings can vary. The most common belief is that it originated in Tokyo during the Edo period, around the mid-1800s. The earliest possible explanation comes from an old Japanese belief that a cat washing its face is a sign that a guest will soon arrive.

There are many folk stories about the origins of Maneki Neko, but the most popular one revolves around a wealthy lord named Ii Naotaka, who tried to escape the rain under a tree near Gotoku-ji temple during a storm. Lord Ii saw the priest’s cat beckoning at him and decided to head over. Just then, a bolt of lightning struck the tree he had only moments earlier been standing under. Moved by his luck, Lord Ii befriended the priest and brought prosperity to Gotoku-ji with his gifts.

Other stories involve a stray cat and a shop, an old woman and a cat or even half a dozen samurai and a cat. It’s safe to say the theme involves a cat bringing in good fortune to a household.

Nowadays Maneki Neko can be found in all kinds of games, comics, and books. In Pokémon, for example, Meowth is based on this fortuitous kitty. It’s a good symbol for visitors curious about coming to Japan. Just as Maneki Neko raises its paw to invite visitors into its homes and shops, Japan does the exact same for guests into its towns, schools, temples and anywhere else.

13886
Study Trips Accommodations Advertise with us