Given the geographic proximity of Japan and Korea, it shouldn’t come as a surprise that these two countries share many things in common. One of those things is the language – although different in many respects, there are also several similarities between Japanese and Korean.

From grammar and sentence structure to cultural nuances, read on to learn more about the basics of what is the same and what is different between Japanese and Korean. Read right to the end to find out which one you should learn and why. 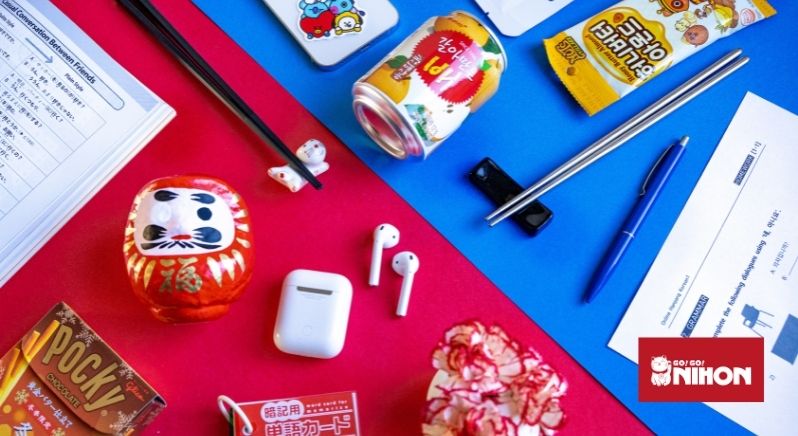 Similarities between Japanese and Korean

It’s very obvious upon listening to people speak both of these languages that they sound different. Speakers of each respective language wouldn’t be able to understand each other without some prior knowledge of the other language.

But when you start looking a bit deeper at what the languages consist of and how they are structured, you’ll start to see more and more similarities.

One of the biggest similarities between Japanese and Korean is the subject + object + verb sentence structure.

The breakdown of this sentence is:

Both Korean and Japanese use particles, which indicate relationships of words and add context to a sentence. These particles are, for example:

As you might have noticed in the example, Korean has more options for the same particle. This is partly because Korean particles have differing levels of politeness, while Japanese particles apply across the board.

As mentioned above, if a Japanese speaker sat down with a Korean speaker, they wouldn’t be able to understand what was being said in Korean – and vice versa. However, they might be able to pick up some words here and there.

Let’s look at some examples of vocabulary similarities between Japanese and Korean: 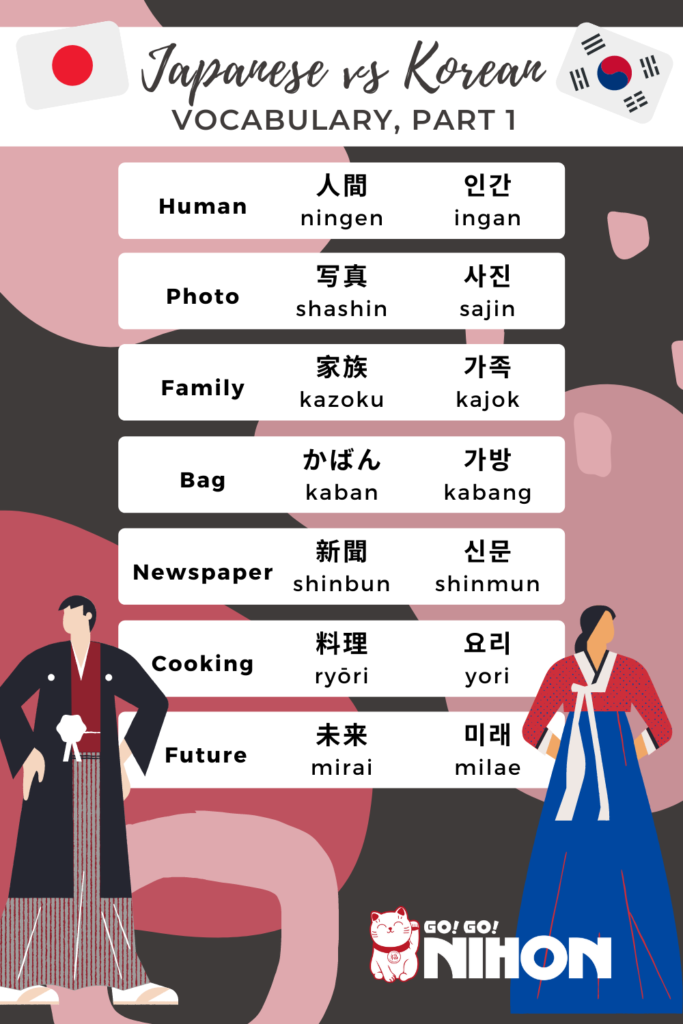 Both languages also borrow foreign words and incorporate them into their native languages. Some examples: 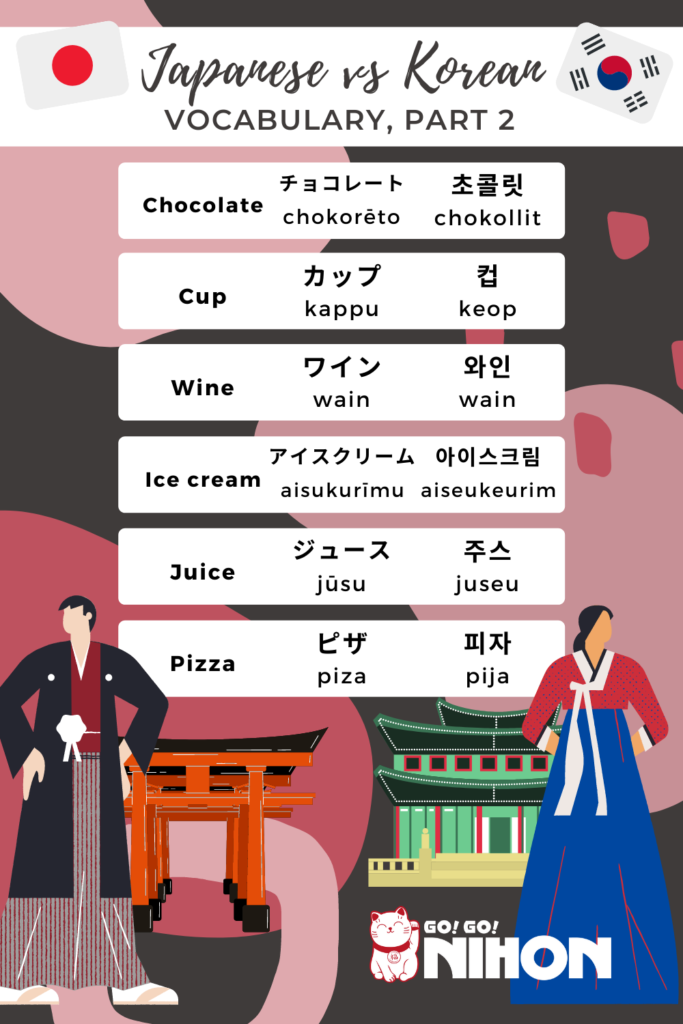 As you know, both Japanese and Korean languages include a large number of words that come from Chinese. Kanji was adopted into Japan around the 5th-6th centuries and hanja was present in Korea even before that (around 400 BCE).

Kanji forms one of three main writing systems in Japanese – the other two are hiragana (used for grammar) and katakana (mostly used for foreign loanwords). It’s very common to see kanji in sentences and it is widely used all over Japan. Learning kanji is therefore very much part and parcel of learning Japanese.

When it comes to hanja, it’s not impossible to get by in Korea without knowing it since hangul 한글, now the official Korean alphabet, is more widely used these days. However, it helps to know hanja since it is still a part of everyday life in Korea. It is still taught in schools and you will see it on restaurant menus, supermarkets, on signs and in academic texts.

Honorifics are essential in both Japanese and Korean. This is as much of a cultural element as it is a language one as honorifics are used to show respect to others and reflect the relationship between you and the person you’re speaking to. Failing to use honorifics in either language is considered a major social faux pas.

For both languages, the list of honorifics is extensive and there are many layers of politeness. They’re usually attached as a suffix after a person’s name e.g. Suzuki-san 鈴木さん, 김철수-님  Kim Choel-su nim.

Differences between Japanese and Korean

Despite all the similarities between Japanese and Korean, they are not mutually intelligible. This is mainly because of the following differences: 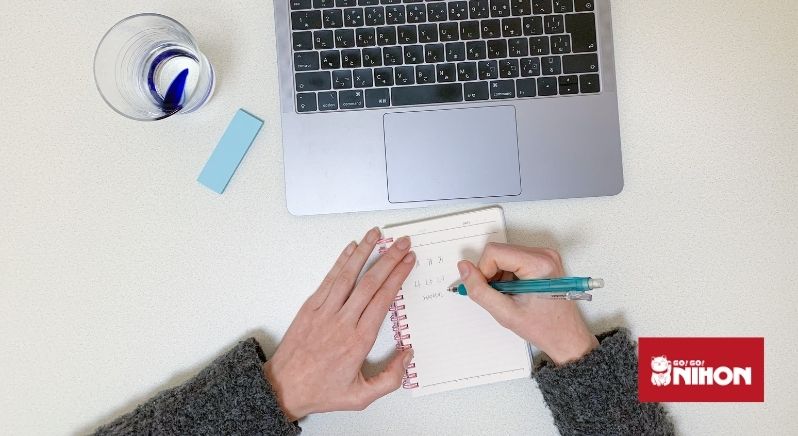 As already mentioned above, both Japanese and Korean incorporate Chinese characters into their writing system. However, that’s where the similarities end when it comes to the written languages.

Japanese includes hiragana and katakana – which are made up of 46 base syllables each – and kanji, of which there are over 50,000 (most adults know nowhere near this number, but know at least 2000).

All three could appear in one sentence e.g.

A breakdown of the sentence:

田中 – Tanaka, a name that is in kanji
さん – san, an honorific in hiragana
今年 – “this year” in kanji
スペイン – the word “Spain” in katakana
にいきますか – “ni’ is a particle indicating motion and “ikimasu” meaning “to go”, in hiragana

Learning kanji is inescapable when learning Japanese. This makes it considerably more difficult to learn in terms of the writing. However, if you hope to one day learn Chinese, then knowing Japanese will help as you’ll be able to recognise many of the Chinese characters.

Korean these days is written using hangul, which consists of 14 consonants and 10 vowels that fit together to make syllables. In terms of writing, Korean is easier than Japanese since the alphabet is straightforward and simple. Once you have learned the alphabet, you can technically read any Korean word (whether or not you understand it is another issue!).

You learn each alphabet separately at first e.g. consonants like ㄱ(g), ㄴ(n), ㄷ(d) and vowels like ㅏ(a), ㅓ(eo), ㅗ(o). Then you can combine them both and make tons of examples with meaning or just sounds.

If you learn and memorise the total of 24 basic letters you can at least read them easily.

Japanese and Korean are very different languages when it comes to pronunciation. This is where many would argue that Japanese is easier. It is entirely phonetic so you pronounce words exactly how they are written. There are intricacies around pitch accent in Japanese, but generally people will understand you even if you don’t pronounce something perfectly.

Korean has more sounds than Japanese, making it slightly more complicated to pronounce. English speakers may struggle with some of the unfamiliar sounds and in general, Westerners may find many of the sounds to be quite similar to each other. It’s important to be able to distinguish them all and pronounce them properly in order to be understood.

Which one should I learn?

This is a deeply personal decision and shouldn’t be made solely based on the similarities and differences between Japanese and Korean alone. Each language has things about it that make it easier or harder to learn than the other and it’s better to take a holistic approach when making this decision. This includes considering what your long-term goals are and what you want out of this experience. Is it your dream to live and work in either Korea or Japan? Do you want to do some travel and explore the places that tourists never have time to get to?

Some things to consider:

Culturally, Korea and Japan share many similarities – societal structure, work culture, collectivist mindset. But they are also polar opposites in many ways, from cuisine and preferences in design, to general stereotypes about personality traits.

Covid-19 has had a big impact on both countries and language students who want to study in either country. As of the writing of this article, there are Covid-related restrictions in place in both countries, please contact us for the latest information.

2201
Study Trips Accommodations Advertise with us