While in Japan you’ll probably get some recommendations or instructions to go to a specific place, or address. Finding your way there might be a bit tricky if you can’t read a Japanese address, so here’s our guide on how to do that.

First of all, let’s look at how a Japanese address is structured. You won’t see a street name in an address in Japan (Kyoto and Sapporo are exceptions to this rule). This makes reading a western address different from how you read a Japanese address.

In Japan addresses start with the postal code, followed by the largest geographic element and finishes with the smallest- most specific element, in other words the apartment or room number.

When typing an address in rōmaji– the roman alphabet, the order of writing is reversed to when writing in Japanese characters. That is to say, you start with the apartment or building name, and finish with the prefecture and postal code. When inputting a Japanese address into Google Maps, you should write it in this order.

For example, here is how to write the address to the Go! Go! Nihon office in rōmaji and with Japanese characters: 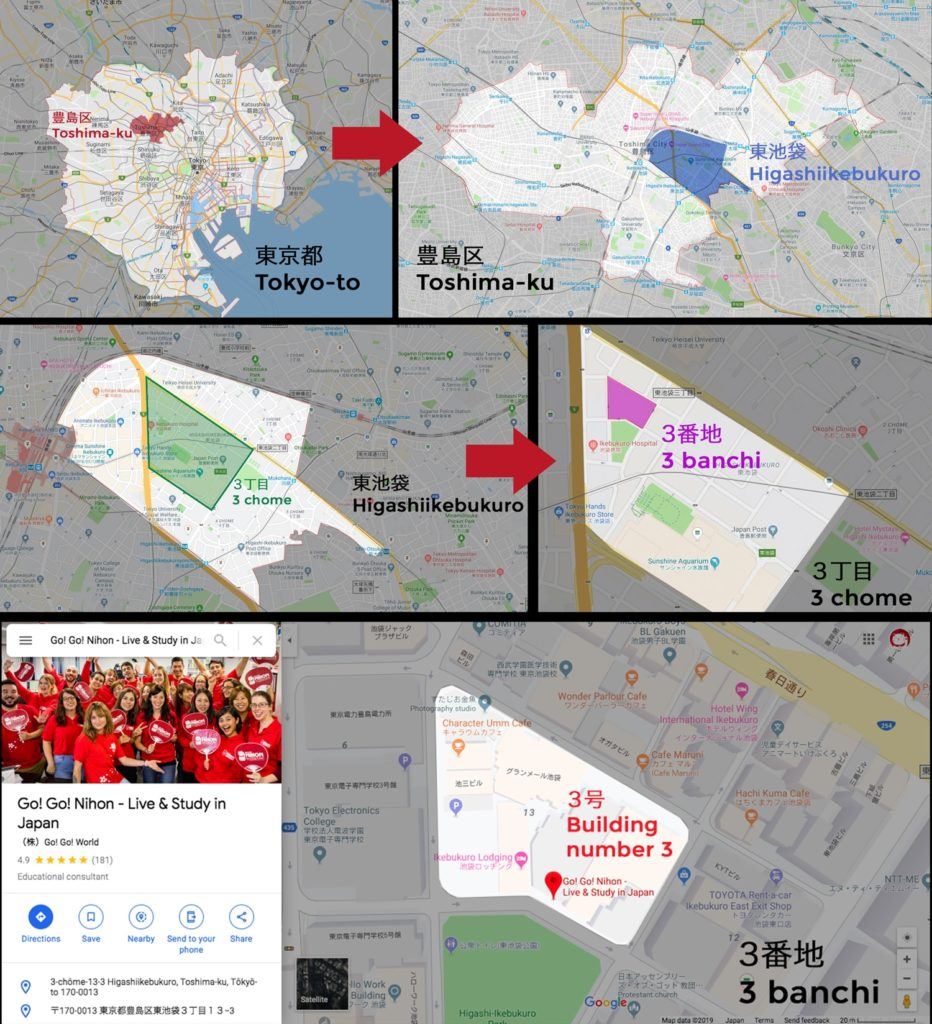 Now, let’s break the address down and explain the different parts.

〒170-0013
This is the postal code. 〒 is the symbol for Japanese post (similar to katakana テ te). In Japan postal codes consists of 7 digits. NNN-NNNN

Japan is divided into 47 prefectures (県, ken), and this is the next part of any address. Usually it’s called and written 県 (ken), like Tochigi prefecture: 栃木県 (Tochigi-ken). But there are a few exceptions.

The name of a city is followed by the suffix (市), like Yokohama city (横浜市, Yokohama-shi).

Bigger cities can be divided into smaller sections as well, these are called wards. Tokyo is divided into 23 special wards (特別区, tokubetsu-ku), commonly referred to as just wards (区, ku). For example Shinjuku ward (新宿区, Shinjuku-ku).

For example, the first part of the address to Sakuragi-chō station is: 神奈川県横浜市中区桜木町. Which translates into: Kanagawa prefecture, Yokohama city, Naka ward, Sakuragi town.

Japanese cities are divided into city districts (丁目, chōme). These are often assigned based on the closeness to the city center. When you read a Japanese address, chōme follows after a number. Like ３丁目 (san–chōme) meaning third city district.

After the city district comes the city block number (番地, banchi). Like chōme the banchi is preceded by the number. The city blocks are often irregular in shape and can be located in a scattered order. This is because they are numbered after the order they were registered.

Houses and buildings are ordered using house numbers (号, gō). The order of the numbers depend on when the house was built, which means that a number doesn’t have to follow the previous one in a linear order. Gō can also be assigned in a clockwise order around the city block.

If the house or building has an established name, this will sometimes follow after the house number.

For example, Ichiran ramen in Shibuya is located at 東京都渋谷区神南１丁目22−7 岩本ビルB1F (Tokyo-to, Shibuya-shi, Jinnan, 1-chōme−22−7 岩本ビルB1F) which means it’s located on the B1 floor in the Iwamoto building.

For apartments, the house number (or building name) is followed by an apartment number. This is usually just added on after the number combination of city district, block and house number. For example, if one of the previous mentioned addresses was an apartment building the address could be 3丁目3番地13号502 (or 3-3-13-502). In other words, the apartment number here is 502.

Lastly, there are a few exceptions to these rules. In Kyoto and Sapporo the way you read a Japanese address differ from the official national address system. In this Wikipedia article there is a very detailed guide to addresses in these areas.

We hope that this guide will help you the next time you need to look at a Japanese map. And that finding your way around Japan will be a lot easier now that you know how to read a Japanese address.

15418
Study Trips Accommodations Advertise with us