Chopsticks are the ubiquitous eating utensil in Japan, but it’s not just something you eat food with. Using chopsticks in Japan comes with its own set of rules and etiquette, which may not be apparent to those who haven’t grown up in a culture where chopsticks are frequently used.

While there is some leeway given if you’re a foreigner and not all the rules are hard and fast, it’s always better to educate yourself about local practices and social rules.

Chopsticks have an ancient past, beginning in China from at least 1200 BCE. They were originally used for cooking and it was only from 400 CE that they were used as eating tools. The oldest record of chopsticks being used in Japan is from 712 CE, but it’s likely they were being used before then.

At the start, chopsticks were only used in Japanese ceremonies before making their way into people’s homes and being used on a regular basis. In 1878, Japan created the first disposable chopsticks, typically made out of bamboo or wood.

As with other Asian countries, Japan’s primary eating utensils these days are chopsticks. Certainly at izakaya, sushi and noodle restaurants, you would be given chopsticks to use from the outset. 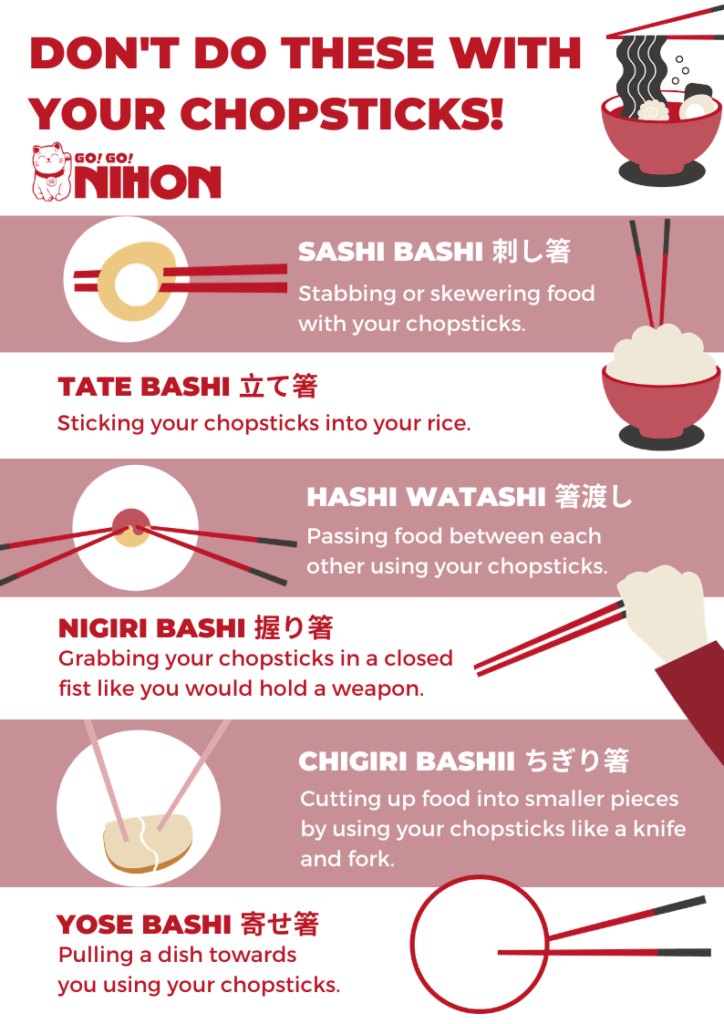 Chopsticks come with their own etiquette in Japan and it would be beneficial to know these rules so you don’t unwittingly offend people.

The following are all considered to be a breach of etiquette when it comes to using chopsticks in Japan:

立て箸 (たてばし, tate bashi) – sticking your chopsticks into your rice. It looks like what people do at funerals, when they light incense for the deceased (the chopsticks represent the incense sticks).

箸渡し (はしわたし, hashi watashi) – passing food between each other using your chopsticks. This is also related to funeral rituals, where a bone fragment of the deceased is passed from one pair of chopsticks to another when placing the remains in a funerary urn.

握り箸 (にぎりばし, nigiri bashi) – grabbing your chopsticks in a closed fist like you would hold a weapon.

叩き箸 (たたきばし, tataki bashi) – hitting your chopsticks against a dish, or tapping them against the table.

探り箸 (さぐりばし, saguri bashi) – rummaging through a dish or pot using your chopsticks to find a food you like.

迷い箸 (まよいばし, mayoi bashi) – hovering your chopsticks over several dishes when deciding what you want.

揃え箸 (そろえばし, soroe bashi) – lining up your chopsticks by tapping them vertically on a table or dish. If you need to adjust your chopsticks, use your other hand to align them properly again.

ちぎり箸 (ちぎりばし, chigiri bashi) – cutting up food into smaller pieces by using your chopsticks like a knife and fork. If you are having trouble breaking up larger bits of food, ask the restaurant staff if they can give you a knife and fork.

You should use the chopstick rest when you’re not using your chopsticks. If you have disposable chopsticks, you can place them on your paper wrapper. Make sure your chopsticks don’t cross each other and are always laid down in parallel, since crossed chopsticks are a symbol of death. 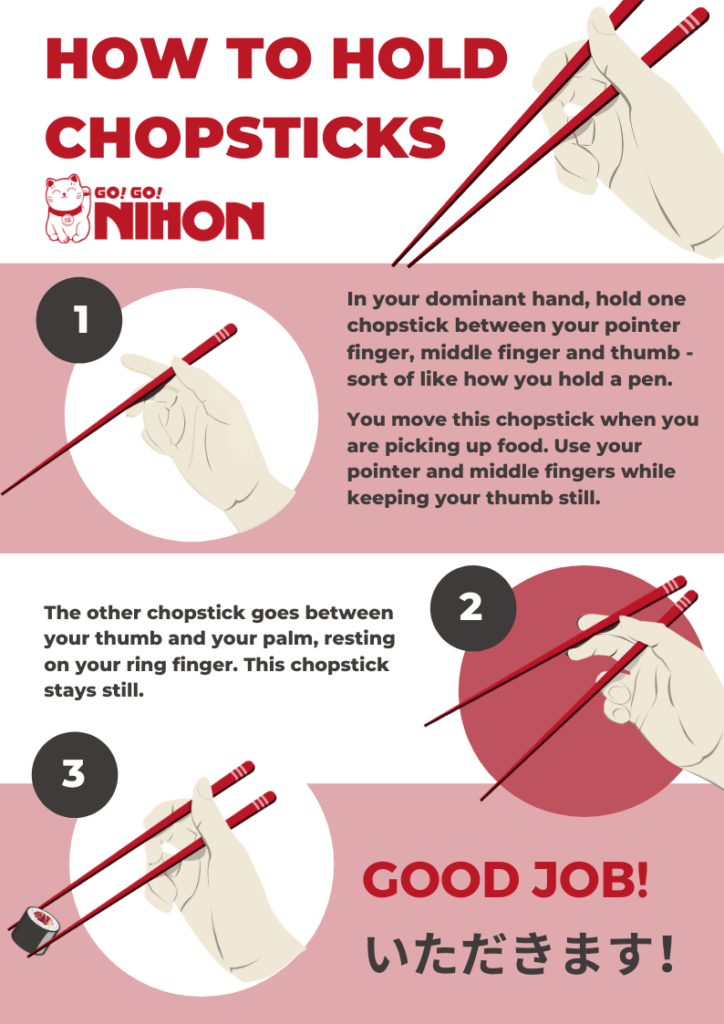 How to hold chopsticks

There are different ways of holding chopsticks and what might be “right” for one person, could feel totally unnatural to another. However, there is a “right” way in terms of it being, in general, one of the easiest ways to hold chopsticks.

If you’re unfamiliar with using chopsticks, practice makes perfect! And don’t worry if you find another method that works better for you – many people just use chopsticks in the way that feels most comfortable for them.

Similarly, don’t stress too much if all the etiquette rules seem a bit overwhelming. Just exercise some common sense and take the time to understand why some of those rules exist in the first place. A lot of it is about being considerate towards other people. The more you use chopsticks in Japan, the more familiar everything will become and soon, you’ll be using them correctly without even thinking about it.

Learn more about Japanese culture and etiquette on our blog.

6288
Study Trips Accommodations Advertise with us