In Japan, millions of commuters board trains and subways everyday, and if you’ve ever been on a train in Japan you know that it’s usually a very orderly and smooth experience. The train etiquette in Japan is very important, trains are almost always on time and the trains can swallow a lot more people than you might think. To make the journey easy and painless for everyone, please follow these general rules and courtesy guidelines.

Overall the train etiquette in Japan comes down to two things: don’t disturb and be considerate of other passengers. Here are 10 do’s and don’ts while on the train in Japan.

1. Don’t take up too much space

Sharing the seat with others and not putting any luggage on the seat is crucial train etiquette in Japan. Many Japanese spend a considerable part of their day commuting on the train, so don’t take up too much seat space. Be considerate of other passengers when you have a lot of luggage, try to keep your luggage close to you or make use of the overhead shelfs. 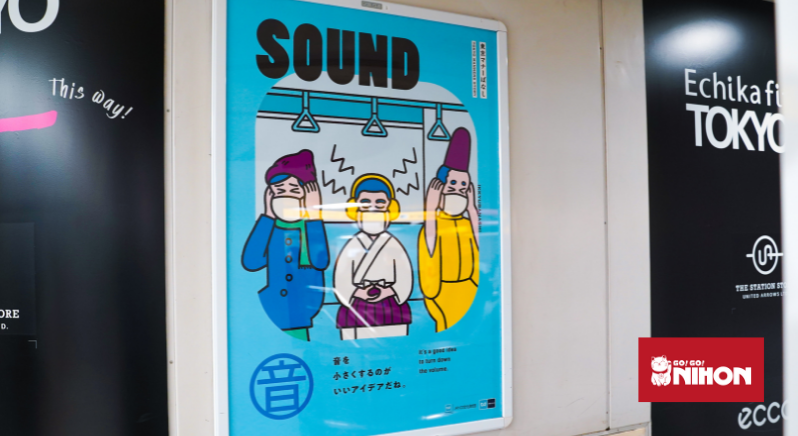 As mentioned previously, the trains are crowded and the passengers spend a lot of time on the train- often tired going to and from work. Keeping noise to a minimum is the polite thing to do. Refrain from talking loudly with your travel company/on the phone, making a commotion, listening to music or watching videos on speaker.

Be careful of noise leaking out from headphones. Riding the train during rush hour means standing very close to your fellow passengers, so keep it down.

3. Put your phone on mute

Put your phone on silent mode (マナーモード, māna mōdo), and refrain from talking on the phone while on the train. When riding the bullet train (新幹線, shinkansen) please move to the area between the train cars to take phone calls.

In Japan there are priority (or courtesy) seats in most train cars, usually marked by a sign and a different colour of seat fabric. These seats are designated for the elderly, those with disabilities, pregnant women, and young children. Priority seats can be used by anyone if the train isn’t busy, but please give up your seat to anyone in need. Put your phone on silent mode around these seats.

Offering your seat to someone who might need it, even if it’s not a priority seat, is good train etiquette.

5. Get on the train in turn & don’t rush onto the train

When waiting for the train in Japan, make sure you wait in line and let passengers get off the train before boarding. Cutting in line is not a good idea, it’s considered very rude. Don’t rush to get on your train, when the train is ready to leave a signal will sound and the doors close. Don’t try to run or squeeze onto the train since it’s dangerous and might delay the train.

If you’re on the train, you should also help others getting on and off by moving away from the doors or checking if other passengers are trying to get off the train. If the train is particularly packed, it may be better to exit the train temporarily to let other passengers off, and then get back on. Japanese people usually never eat or drink when outside in public. Food or snack items bought at convenience stores are often eaten inside the store or just outside. The same is true when it comes to trains in Japan. People don’t usually eat or drink anything other than water while on the train.

When riding the Shinkansen or on a long train ride in a green car (reserved seating) you are allowed to eat and drink. The seats actually have tables and cup holders. There are also food, drinks, and snacks being sold in these train cars. But on commuter trains, avoid eating.

Make sure you take all your belongings and garbage with you when leaving the train. Don’t leave used tissues, pet bottles, newspapers or other types of litter on the train. There are often trash cans on the train platforms, where you can dispose of your garbage.

Doing your makeup on the train is considered bad train etiquette in Japan. Cosmetic products might spill and stain other passengers’ clothes, or the train seats. Many people seem to be bothered by seeing other passengers putting on makeup. Maybe stick to doing your personal grooming at home, before boarding the train.

Smoking is usually not allowed outside in Japan, unless it’s done at a designated smoking area. Smoking indoors, however, is more often ok. But on trains there’s a strict no smoking rule. (Except for the smoking car on the Shinkansen) Just don’t smoke on the train in Japan!

While in Japan you’ll probably come across a drunken salaryman or two. But try not to fall asleep on the floor or across several train seats. Littering, making commotion or talking too loudly on the train is frowned upon (as previously stated) so please behave, even if drunk.

Be careful when using your smartphone while moving onto and off trains. Walking slowly with your phone in front of your eyes and no spatial awareness is dangerous and can be very annoying for passengers rushing to get to their connecting train.

While riding the train, be considerate of the other passengers. Offer your seat, help someone with their luggage and don’t think that you’re the only one riding the train. Make the train ride smooth and enjoyable for yourself and everyone around you by following these guidelines to train etiquette in Japan.

Want to know more about trains and commuting in Japan? Take a look at our articles explaining the Suica/Pasmo cards or about the Japan Rail pass.

8791
Study Trips Accommodations Advertise with us