The world of Japanese hot pot ((鍋物 nabemono or 鍋 nabe) is vast and rich. The word is a combination of kanji that mean “cooking pot” (鍋, nabe) and “thing” (物, mono). Simply put, the dish is a delightful mixture of meat, fresh seafood, tofu, seasonal vegetables, and more, cooked in a pot.

There are generally two types of nabe stocks. One is a lighter stock made with kombu seaweed that allows the diner to enjoy the natural taste of the ingredients. The other stock type is more rich, made with miso, soy sauce, or dashi. And of course, the pots are an equally important part of the experience. You will often find nabe prepared in clay pots (土鍋, donabe) or cast iron (鉄鍋, tetsunabe).

While nabe (Japanese hot pot) can be a very customizable dining experience when made on your own, this guide introduces the regional variations of Japanese hot pot, featuring local delicacies and prized ingredients.

Kani Nabe (カニ鍋) features fresh crab and winter vegetables in dashi made from seaweed or bonito fish flakes. Hokkaido is famous for its seafood, which means it’s not a surprise to see seafood included in their local hot pots. One of the reasons why Hokkaido seafood tastes so good is because the region is much colder, and fish need a higher fat content to survive in the region’s cold waters. When done with the meal, diners will often make a porridge called “kani zosui” can be made with the leftover broth by mixing in cooked rice and beaten egg.

Ishikari Nabe (石狩鍋) is named after the longest river on the island and based on a traditional fisherman’s stew. This savory nabe is made with miso broth and features Hokkaido salmon, tofu, Chinese cabbages, onions. Ishikari Nabe is also believed to have been enjoyed since the Meiji period. Over the years, there has been an effort to promote the local nabe. One restaurant in Ishikari City has even registered September 15 as the Ishikari Nabe day in 2008. 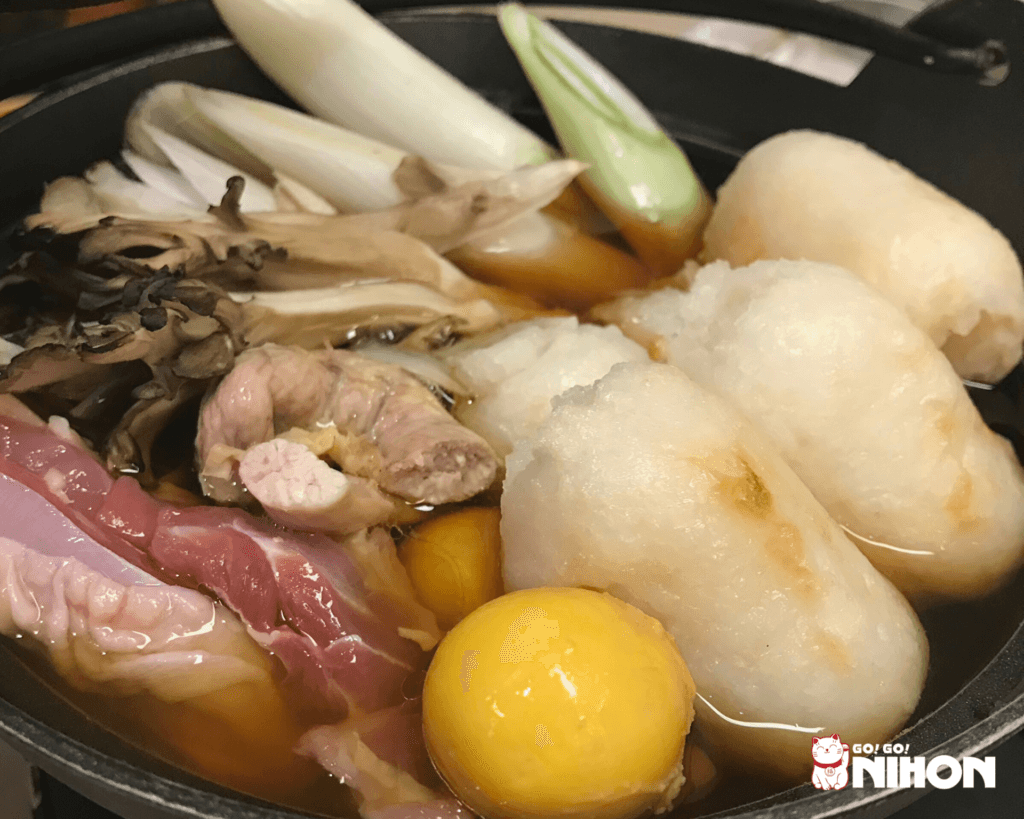 Kiritanpo Nabe (きりたんぽ 鍋) comes from the northeastern Tohoku region of Japan and named after the spear-like rice cakes that are the stars of the show. The rice cakes are freshly made by pounding boiled rice into a paste then placed on cedar wood skewers and grilled over fire. After done toasting, the cakes are cut into smaller pieces into the miso-based nabe. The toasty and smoky flavors are paired with local fowl, burdock root, maitake mushrooms, Japanese leek, and herbs.

Yudofu Nabe (湯豆腐鍋) from Kyoto is a simple dish, made with hot water, kombu seaweed, and silken tofu. Don’t underestimate the simplicity of the dish though. Tofu in Kyoto is freshly hand-made and regarded as some of the best in the world. For the yudofu nabe, fresh tofu is simmered in broth and then eaten with ponzu sauce and yuzu-kosho, a condiment of grated yuzu citrus and chili pepper. Plus, this nabe is vegetarian-friendly.

Hari-hari nabe (はりはり鍋) in nabe from Osaka traditionally made with whale meat and Japanese mustard greens. The name “hari-hari” is an onomatopoeia referring to the sound of chewing the mustard greens. This dish was popular when whale meat was easy to get and even enjoyed by everyday people. Today, with limitations on commercial whaling and scarcity, people often substitute with pork and duck. 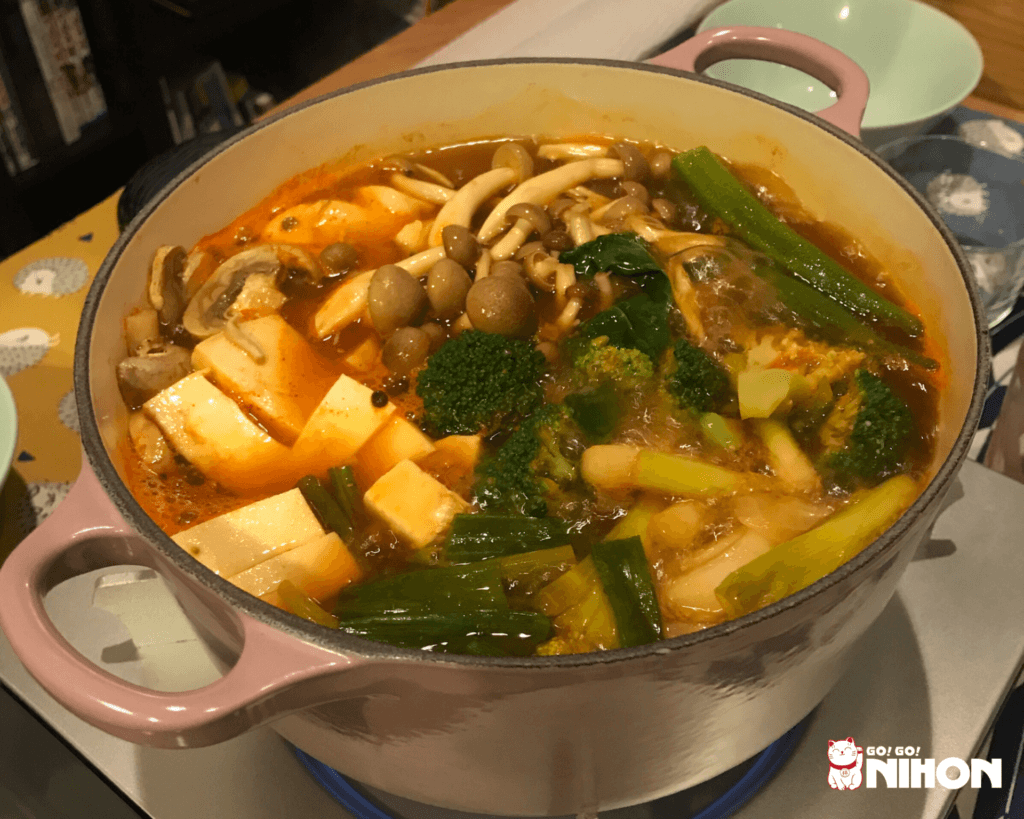 Mizutaki Nabe (水炊き鍋) is Fukuoka’s nabe which is made by simmering a mixture of Kyushu’s local chicken, Hakata spring onions, and seasonal vegetables. The name translates to “you boil from the water,” also making a simple dish, but with flavorful reward. Fukuoka is also known for other tasty foods including Motsunabe, a rich hot pot featuring beef and pork offal.

Anko Nabe (あんこう鍋) is from Ibaraki, a prefecture in Kanto that’s celebrated for anko, the prized monkfish that comes fresh from the region’s coasts. The fish is quite rare and expensive, its flavor sweet, and its texture is similar to lobster meat. Anko nabe is best enjoyed during the winter season made with the skin and meat of the monkfish, along with vegetables, and of course, the broth.

One of the best things about Japanese hot pot is that the soup gets more delicious over time, absorbing flavors from vegetables, meat, and seafood. At the very end, people often add rice or noodles to the pot to enjoy the dish to its fullest. This guide is just a taste of the many variations of nabemono in Japan.

To learn more about food, life and culture in Japan, keep up with the Go! Go! Nihon blog.

3081
Study Trips Accommodations Advertise with us