The Tanabata Festival is one of the most joyous and colourful festivals in Japan and there are plenty of them that happen all over Japan. Tanabata (七夕) means evening of the seventh, but it can also sometimes be called Star Festival. 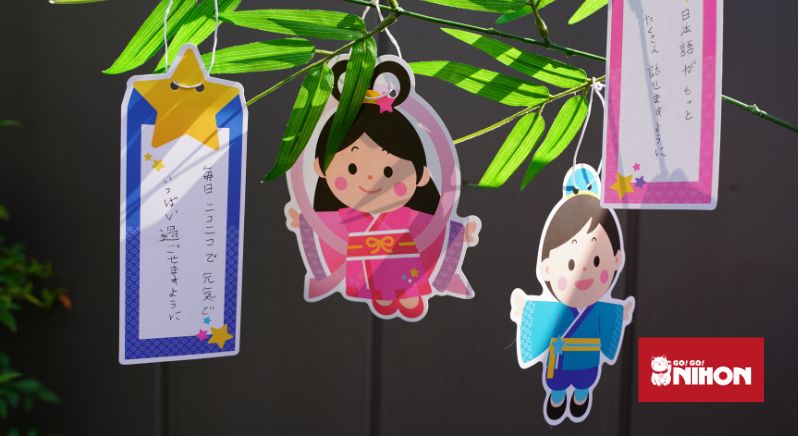 Where it all started

The Tanabata Festival has been around for a very long time and was introduced to Japan in 755. It is based on a festival from China called the Qixi festival.

The celebration is based around a story of two lovers that were separated and united just once a year. The Princess Orihime would weave clothes on the bank of the Heavenly River Amanogawa for her father the Sky King Tentei.

Orihime loved making her father happy, but she was also very lonely. Her father noticed her sadness and wanting to bring some joy to her life in the way she brought joy to him. He arranged for her to meet a cow herder, Hikoboshi. The two instantly fell in love and got married but they were so in love that they neglected their duties and cows roamed all over.

The King was angered by this and separated the two, breaking Orihime’s heart. After pleading and pleading with her father he finally compromised, saying that she could meet her beloved on the 7th day of the 7th month.

But when the day came, they discovered there was no bridge to cross the river to meet, leaving them separated. Orihime wailed in despair and her cries were so loud they roused some local magpies that took pity on the parted lovers. They built a bridge for them with their wings so they could cross the river and meet again.

The magpies promised to come back on the same day each year and so the festival was born.

How to celebrate with style

One of the main activities at the Tanabata Festival is focused around hope. Each attendee writes a wish on a small strip of paper called a tanzaku (短冊) before hanging it on some bamboo. At the end of the festival, they’re either set afloat on a local river or burnt in the hope that they will all be granted over the coming year.

All of the decorations are made from paper and each festival has some spectacular ones. At the Sendai festival in particular, there are several types of decorations each representing different types of wishes.

Kamigoromo  – shaped like Japanese kimono. This is for Orihime’s weaving and represents the wish for better sewing skills.
Fukinagashi – these are the streamers you will see a lot of. Representing Orihime’s yarn and wishes for improved creativity.
Kuzukago –  these are in the shape of a scrap fabric bin, representing wishes for thriftiness and tidiness.
Toami – odd ones in the shape of seafood. These aren’t as connected to the story as the others are, but are connected to superstition around fortune and luck.
Senbatsuru – a classic Japanese paper decoration an origami crane. These have connections to long life and concentration.
Kinchaku – another one that is more connected to general Japanese symbolism rather than the Tanabata story. This paper in the shape of a purse represents wishes for wealth. 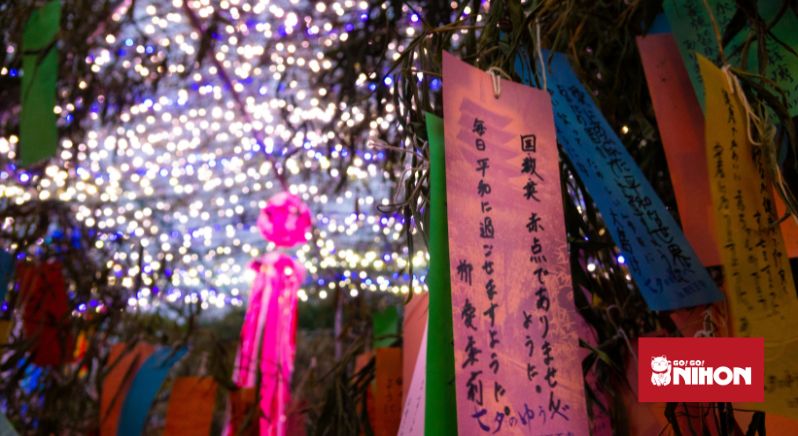 While the tradition around the story means the festival should be held in July, those held around the country are often on different dates. Here are some of our top ones:

Held in August, this festival is famous for its giant creative papier mache sculptures that decorate the Pearl Centre shopping mall where the festival is celebrated. It attracts thousands of visitors coming to view the colourful paper sculptures of cartoon and mythical characters.

The Asakusa festival is held on the 6th-10th July. As well as the decorations, parades and usual celebrations, there are plenty of traditional handicrafts that you can pick up while you’re in the area. With lots of smaller independent shops and production houses you’ll be sure to find some unique gifts for your friends and family. What’s more, you can enjoy the fireworks and celebrations with Tokyo Skytree standing out in the distance.

This is one of the largest and most famous Tanabata festivals in the country. Held on the 6th-8th of August, the city’s shopping arcades are lined with hundreds of colourful decorations. The local communities come together to make them and decorate the city. There are performances, live music, and of course, plenty of delicious food stalls. There’s even a fireworks display along the river banks.

Held at the beginning of July from the 5th-8th this Tanabata festival started post-war to support the economy and promote local businesses. It has continued ever since with the decorations getting larger and larger each year. There is a parade each day to showcase the wonderful paper sculptures made by local businesses.

The Tanabata festival is one of the biggest and most popular out of the array of festivals held in Japan. Get your yukata out and get ready for a wonderful night of food and celebrations. Oh and don’t forget to think of your wish!

Tags: things to do

2395
Study Trips Accommodations Advertise with us