Japanese green tea (茶, cha) is a very important part of Japanese culture and the accompanying ceremony is one of the three classical Japanese arts of refinement.

The Japanese tea ceremony is called sadō (茶道) or chanoyu (茶の湯) in Japanese, which means the way of tea. The ritual is quite simple, but all the steps and movements have to be executed precisely- so it’s not easy. The person preparing the tea is the host (亭主, teishu). It takes years of practice to become a skilled teishu.

In Japan the art of preparing and drinking tea has a long history. The beverage was introduced from China during the 8th century, but for a long time, it was mostly drunk only by the higher society. Since tea was a very valuable and rare product the Japanese took great care in preparing and enjoying it.

When zen buddhism spread over Japan during the Kamakura period (1185-1333) the way of drinking tea also changed. The Japanese started to grind the green tea (抹茶, matcha) into powder and whisking it, drinking the actual tea leaves. Much like the way we drink matcha green tea today.

Green tea has many health benefits and was, at first, mainly used as a medicinal plant. With time the healthy green tea gained popularity and spread from the temples to the warrior class (samurai) who began to arrange tea parties. Later, the rest of the population also realised the appeal of green tea and the ceremony of preparing and enjoying tea became a part of social gatherings. During the Muromachi period (1392-1491) the ceremony was refined, and the tradition of social tea gatherings and the temple ritual of preparing tea stared to merge. Modern day sadō is said to be based on the philosophy of Sen no Rikyū, who perfected the teachings of his precursors. He promoted a simple and rustic aesthetic known as “wabi-sabi“.

Even though the core of the tea ceremony, which dates back hundreds of years, is the same there are many different schools and ways of tea today.

There are three main schools when it comes to the Japanese tea ceremony, called the san-senke (三千家, three Sen houses/families). The founders of these three schools all descend from Sen no Rikyū. Urasenke is the biggest school, followed by the Omotesenke and the smallest, least commonly known Mushanokōjisenke.

There are some differences between the schools. For instance Urasenke is said to prefer utensils made by famous craftsmen and, while whisking, covering the tea completely with foam. While the Omotesenke is known to favour more simple and plain utensils and also leaving a “lake” of uncovered tea in the middle of the tea bowl.

All three of the main schools are situated in Kyoto, which is the centre of the Japanese tea ceremony. 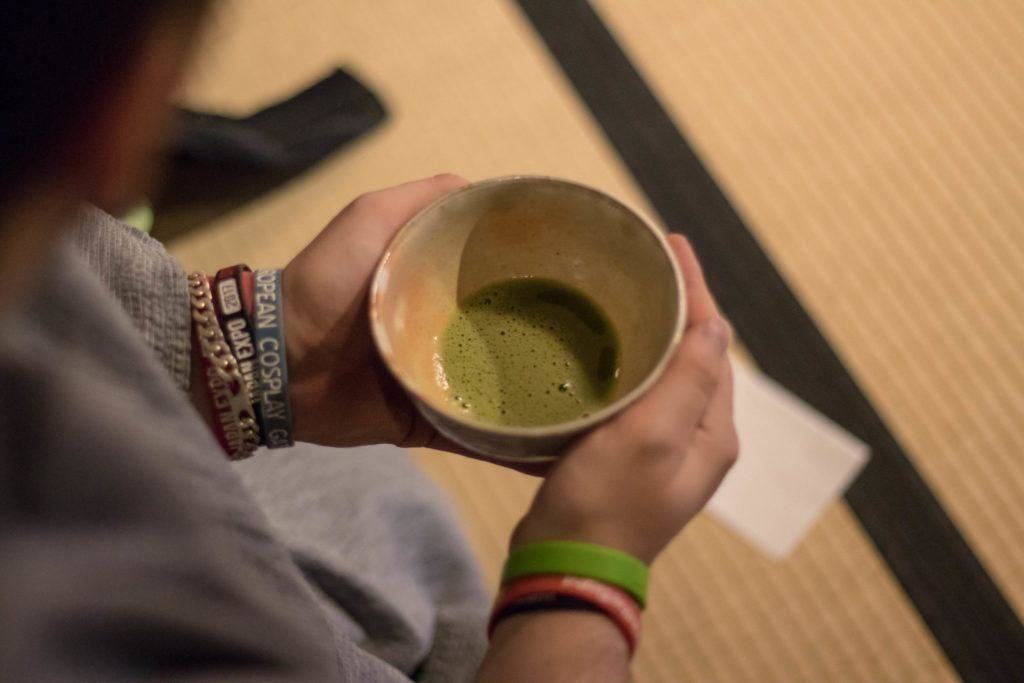 There are many rules and protocols to follow, both as a guest and as a practitioner of the Japanese tea ceremony. Tea gatherings can be both formal and informal, and a full formal tea ceremony can take hours and include a kaiseki meal (traditional multi-course dinner).

At formal occasions the host always wears a kimono (or hakama) and guests usually wear a kimono or western formal wear.

There is a wide range of equipment used during sadō (tea ceremony); all have meaning and are used at a specific time. Here are some of the most important utensils, used in all different types of tea ceremonies.

Chawan (茶碗) is the most essential of all Japanese tea ceremony equipment. The ceramic tea bowl comes in a variety of sizes and styles, and the best ones are handmade. Different styles are used depending on the thickness of the tea being served. Chawan can be very valuable and always has a “front” and a “back” side. The tea bowl is always examined and admired by the guests as a part of the tea ceremony.

Chasen (茶筅) is used to whisk the matcha green tea with hot water. It’s made from a single piece of either fresh, dried or smoked bamboo. There are different types of chasen, used depending on the tea thickness.

Also carved from a single piece of bamboo, or made of ivory or wood, the chashaku (茶杓) is used to scoop matcha from the tea caddy into the chawan.

Hishaku (柄杓) is a long bamboo ladle used to transfer hot water to the chawan during sadō. It is also used when ladling water in other parts of the tea ceremony. Hishaku, like other equipment, comes in different sizes depending on the type of ceremony and also varies throughout different parts of the ceremony.

A traditional Japanese tea ceremony is held in a tea room/tea house  (茶室, chashitsu) with tatami floors. Chashitsu usually has an alcove (床の間, tokonoma) where flowers and other decorations can be displayed. A hanging scroll (掛け軸, kakejiku) showing calligraphy and/or a painting is also placed in the alcove. Appreciating the thought and care taken while choosing the decorations and preparing the tea room is a vital part of the ceremony. Every part of the room and utensil is carefully selected especially for this occasion by the host. The host and the guests are seated on the tatami floor during sadō.

A tea house is usually surrounded by a tranquil and beautiful garden with a garden path (路地, roji) leading to the tea room/house. A tea ceremony can also be held outside, in a picnic style. This is called nodate (野点).

Before entering the tea room, guests should purify themselves by rinsing their hands and mouth with water from a stone basin. Upon entering the room, guests wear tabi socks (split toe socks) and should take care not to step on the silk borders on the tatami floor. Guests sit in seiza (正座), formal kneeling position and the seating arrangement is important in the tea ceremony. The person sitting closest to the tokonoma alcove is the guest of honour. The place furthest from tokonoma is the least prestigious one.

The host enters after all guests are seated and greets the guests and partake in some light conversation about the tearoom and the decorations.

In a Japanese tea ceremony the tea is made by the host (teishu), typically in front of the guests. Every step is carried out carefully and precisely by the teishu, and every movement is important. The order and placement of the utensils all have meaning and varies depending of the type of ceremony. The tea bowl, whisk and tea scoop are ritually cleaned in front of the guests. After this the teishu prepares the tea.

At a formal event thick tea is served first, and all guests are served from a communal chawan of tea. Each guest, staring from the guest of honour, is presented with the chawan. The guest should appreciate the front of the tea bowl, but turn it clockwise by around 90 degrees before drinking. Bowing to the host and neighbour guest is also important, as well as complimenting the host on the tea.

The chawan is passed to the other guests who repeat this process until all guests have been served the tea. The host will then clean the utensils. Later on a thinner tea will be served, individually to each guest, along with accompanying sweets.

At more casual events the tea will be served to each guest, individually, but the chawan should be examined and turned in the same way as at a formal event. The bitter matcha tea is served alongside a Japanese sweet (和菓子, wagashi). At end of the ceremony there is time to look at, and appreciate the chawan. When the guests have finished the tea, the bowl should be turned with the front facing the teishu. Then placed back on the tatami floor.

When the tea is finished over the host cleanses the utensils again and returns them to where they were before starting. And the Japanese tea ceremony is over.

Want to experience the Japanese tea ceremony firsthand? Take a look at our traditional Japan study trip where you might get the chance to partake in this unique Japanese tradition.

4278
Study Trips Accommodations Advertise with us