Are you familiar with the saying “kill two birds with one stone”? Well, it turns out that it’s quite the universal phrase and even exists in Japanese too. This Japanese proverb is written as: 一石二鳥 (isseki-nichō) and it’s not just a coincidence that exists in English and Japanese! 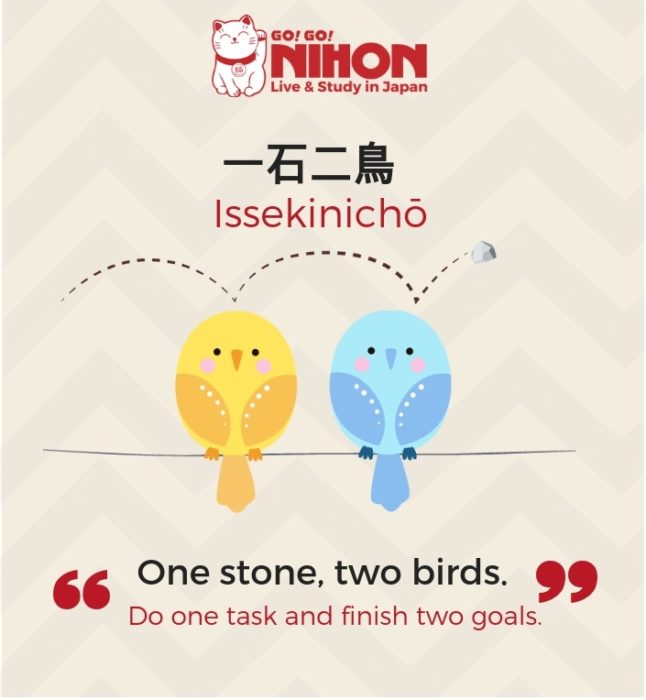 To kill two birds with a stone!?

Before we dive into the saying itself let’s look at the background of Japanese proverbs and how they’ve come about.

Firstly the name for proverb in Japanese is kotowaza (諺)  and this one falls into the category of yojijukugo (四字 熟語), that is a lexeme composed of four kanji that encompass an entire concept. That is to say, a complete proverb that is made up of four kanji and is not just a noun but has a different meaning to the literal translation.

Yojijukugo is a linguistic custom that has deep routes in China. In fact, the overwhelming majority of these were adopted directly from classical Chinese literature, or have derived from Buddhist writings. However, they have been adapted to fit Japanese tastes and culture from that time. As such it’s easy to say that yojijukugo 一石二鳥 was imported into Japan directly from China but remember that not all kanji is exactly the same so we have to be careful how we look at it and the meaning might not always be Chinese in origin. In fact, the kanji of 一石 means “a stone”, while 二鳥 translates “two birds”. Does it remind you of anything? Of course, it’s so very similar to the English saying to kill two birds with one stone.

Considering the distance between the two countries it’s amazing to see how language has evolved. Did you know that there’s also the original Chinese version too: 一挙両得 (ikkyo-ryōtoku), that literally translates as “an effort, double advantage”.  As we know, in the Meiji period (明治 時代, 1868-1912), as Japan transitioned from feudalism to the modern era, there was a race to Westernisation. In this period, European culture was particularly popular and a large number of scholars and experts went overseas to learn as much as possible. Upon their return, they brought many texts with them to be translated and made accessible to the local population.

As we know, translation is not always that precise and can sometimes be considered more of an art. As such “two birds with one stone” may have made into Japanese as a more simplified form.  These are however just speculation, although is a common occurrence with translations and is something you’ll likely see again. Many think this was the case for this particular yojijukugo, taken from the English to become an official part of the Japanese language but in a very casual way.

If you want to read other articles like this please let us know in the comments. If, on the other hand, you intend to enroll in a Japanese course in Japan, contact us for information on the schools, and the different courses offered.

8966
Study Trips Accommodations Advertise with us