The Japanese kimono is a quintessential garment and despite changing fashion over the years, it’s still seen as an icon of Japan. Literally meaning ‘worn thing’, it’s had a prominent place in the history of Japan as the garment of choice for much of society.

The history of the Japanese kimono

Originating around the 3rd century, there are records of a one-cloth garment worn by both men and women. This is considered the starting point for the Japanese kimono as we now know it. For women, it started as the kantoi, a sleeveless garment. This then evolved into the kosode, which had small sleeves.

A lot of the garments at the time were still influenced by Chinese culture and as it became a more specifically Japanese garment, it adapted with each era. The lengths of the sleeves changed and the different layers evolved as well to become comfortable.

The difference between the styles varied more between men’s and women’s garments as society shifted during the Edo period (1603-1868). Men’s garments and in particular the kimono, continued to be more practical and therefore the colours were often more subdued. As women were considered to be on the ‘private’ side of society there was freedom to make choices around colours and styles, as there was little need for practicality.

The kosode finally became the kimono in the Meiji era (1868-1912) and changes have been more focused around patterns and the style of wearing a kimono rather than any major changes in the shape of the garment itself.

The kimono is most famously associated with geisha, who wear their kimono with elegance and professionalism as they entertain their guests. Read more about geisha in our article here. 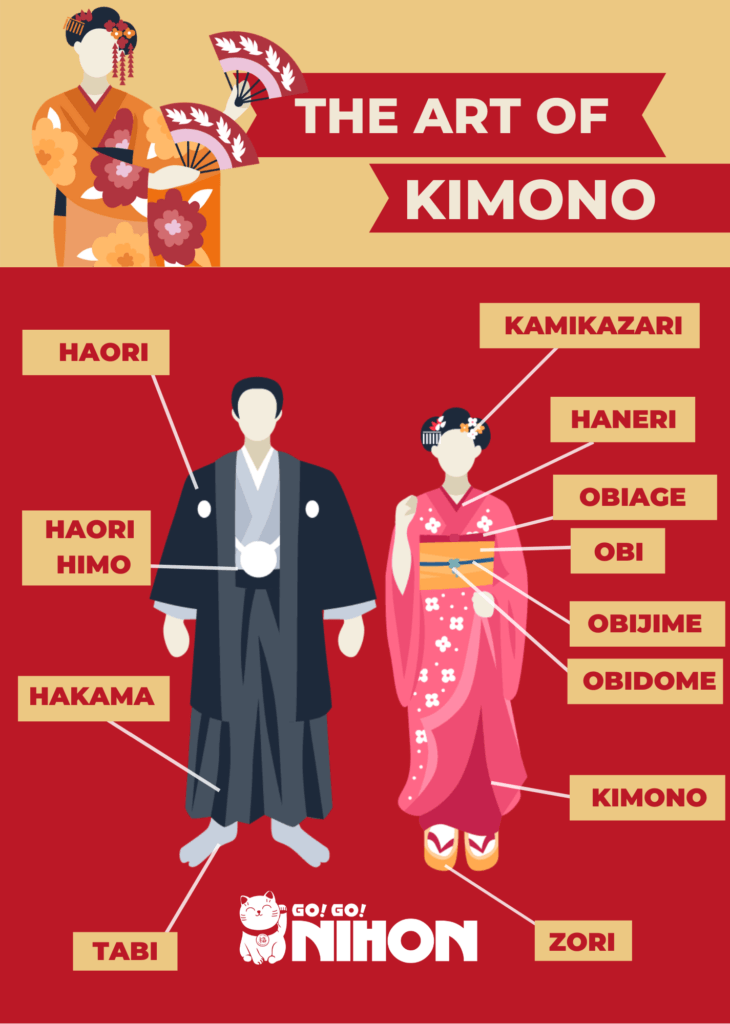 The main part of the garment made up from a single roll of fabric called a tanmono. It spans 13 metres in length and is then divided into 8 parts to make the main piece.

A decorative collar, or haneri, helps to protect the collar of the kimono from getting dirty and is attached to the nagajuban, a simple robe worn underneath the kimono.

For men, they also wear hakama, which are traditional wide-leg trousers.

The obi can vary in style and colour as much as the kimono itself and the fashion around how it is tied has varied over time as well. It would be possible for us to write a whole other article about the obi types and styles too!

A decorative braided cord that is tied outside the obi. It may also be decorated with a brooch or trim, called an obidome.

These are the wooden sandals with an elevated base, often worn with a kimono or yukata. You may also find people wearing zori, which are like geta but are not elevated and can be made out of rice straw, wood, leather, cloth, rubber, or synthetic materials.

This is a shorter overcoat in the same style as the kimono that was traditionally worn by men, but has since been popularised by women as well. There are different types of haori – of note is the happi, a coat often worn by shopkeepers which had branding or kanji on it.

They are often tied at the front with two short cords called haori himo.

These are the socks with the split toes to allow the wearer to keep their feet warm while comfortably wearing their geta.

There are many more accessories that go alongside the kimono, many with practical uses for their wearer and many that are purely decorative. 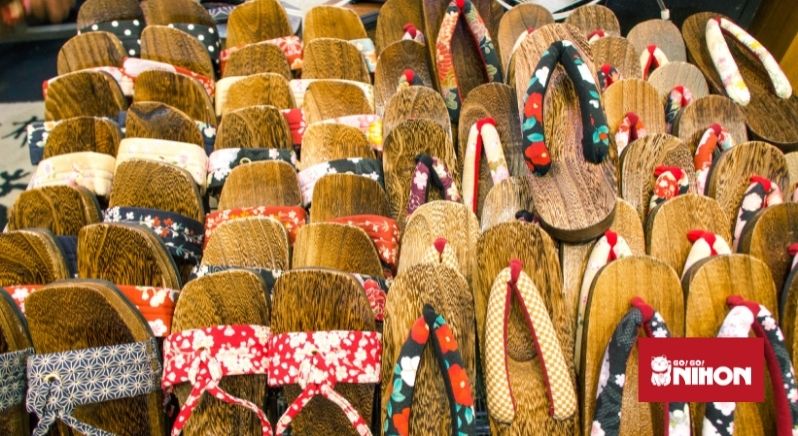 The main piece of the kimono is traditionally made from silk and woven from dyed yarns. Over time, different techniques have been used to create the patterns on kimonos with techniques ranging from shibori (Japanese tie-dye) to embroidery and even printing. Early designs were hand-dyed or stencil-dyed.

There are also a few common symbols and colours that haven’t changed over the years:

While a real creature, the crane is common in mythology and is considered to live for thousands of years in the land of the immortals, hence it is associated with longevity and good fortune.

While it can be worn all year round, cherry blossoms, or sakura, are associated with spring and a good harvest.

Read more about cherry blossoms and their significance here.

These ducks are considered to be lovebirds in Japan and are a common pattern on wedding dresses.

A well-revered flower in Japan that is also the national flower. It is another symbol of longevity as well as good fortune for the harvest season. However, the white chrysanthemum is associated with funerals and death so can take a turn for the worst if you choose the wrong one!

The colour purple symbolises undying love. This derives from the plant that is used for the purple dye as it has long roots and becomes well established in the ground, suggesting permanence.

This is a popular colour with young people and itself symbolizes glamour and allure.

This is less of a specific pattern, but more of a common theme. Kimonos that are designed to give off a more sophisticated air often depict landscape scenes or scenes from folklore.

As Japan opened up to the world in the 18th century, inspiration from Japan travelled with the trade ships. As a result, Japanese fashion influenced various parts of European fashion as part of the Japonism movement.

Even today the kimono continues to influence fashion designers around the world. Alexander McQueen is one of the most notable admirers of the kimono, incorporating it into his clothing ranges over the years.

On a lighter note, the kimono influenced many of the costumes in the Star Wars series, the original itself being heavily influenced by Akira Kurosawa’s film “The Hidden Fortress”. George Lucas drew upon many elements from Japanese culture and cinema, particularly its fashion. Nowadays, the Japanese kimono tends to be reserved for more formal occasions and the yukata is more commonly worn at festivals, as it’s a lighter and cheaper alternative.

Read more about how and when to wear a yukata in our article here.

They are also sometimes made out of more synthetic fabrics since silk is expensive. Some fashion designers in Japan have adapted it for youth culture in more inventive ways and with a few exhibitions around the globe, it’s being revisited as a symbol of Japan.

You can even get quite cheap secondhand kimonos in Harajuku, so why not treat yourself and see what unique twist you can put on this traditional garment!

Want to learn more about Japanese culture? Read more of our articles on our blog.

5572
Study Trips Accommodations Advertise with us