Japanese arcades (ゲームセンター)are everywhere in Japan. You have probably seen quite a few while walking about in busy areas. Usually referred to as game centers here in Japan, these tall buildings exist for the sole purpose of bringing you entertainment and are as popular as ever! In this article, we’re telling you what you’ll find and how things work.

What you need to know

The first Japanese arcades appeared in the late 70’s, featuring games like Space Invaders, and their popularity quickly spread across the world. In the beginning, these arcades mostly offered “amusement machines” or game machines, which then appeared overseas in the 80’s in bars and cafes. With time, they evolved and offered a greater variety of arcade games and so much more! Today, Japanese arcades include crane games, accuracy-based games, rhythm games, fighting games, racing games where you feel like you’re actually driving a vehicle and many other kinds of entertainment which you will find below.

In order to play, you’ll need to use coins. It’s essentially the only way to play, and if you’re out of change, you can always go to one of the conveniently-placed machines which will exchange your bills for coins. Everything has been designed to make it as easy for you to spend money as possible. A typical game will cost you about 100 yen, but some machines, especially crane games, will allow you to buy a package for 500 yen, which can give you a much needed extra try or two. Some skill-based games, or larger machines requiring props, will be a bit more expensive (around 400 yen per game), so if you want to make the most out of Japanese game centers, make sure to bring a lot of change! 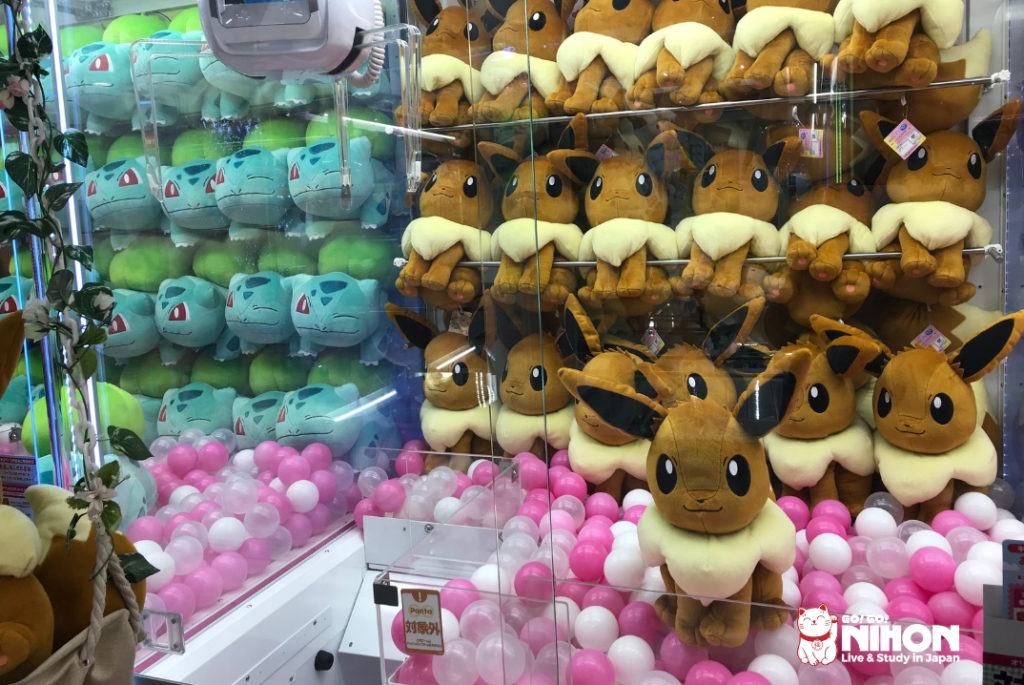 What can you find in Japanese arcades?

When you first enter a game center, you will usually first find crane games, since they tend to be displayed on the first floor. There are various kinds of games: the typical one where you try to grab a plushie with a claw, games where you try to knock something over to make it fall in the prize bin, games where the prize is hanging and you have to cut a string to make it fall, and so many more! Prizes include plushies of all sizes, figures, cushions, kitchenware, candy, alarm clocks, and everything in between.

These machines are some of the most profitable for the arcade: they keep changing the prizes, so people come back over and over to try and get them while they can! One important thing to note is that while it can be tricky to win, the machines are not rigged and it might be easier to get a prize in Japan than in other countries. You may also be surprised to hear that if you end up moving the prize in such a way that winning is impossible, you can ask a staff to reset the position of the prize in order to have a better chance at winning. If you ask nicely, they might even give you a few tips on how to get it!

Rhythm games are prolific in Japan, making people like me very happy! Whether your preferred instrument is the drums, guitar, taiko, your own voice — or if like me, you just enjoy pressing buttons — all of them work basically the same; just follow the rhythm you see on screen. Some games might require you to use your hands, your feet, and your voice in order to get as many points as possible and get a high score. There is something amazing about watching a middle-aged salaryman completely nail an AKB48 choreography. I’ve also seen people meet up and play Dance Dance Revolution as a workout, with water bottles, towels and everything!

Fighting and racing games can be played individually, but the greatest fun to be had is definitely playing them with friends. Machines usually give you the option to find matches online or to set you up against another player near you. Shooting games typically involve large booths where you and a friend can use a gun replica as a controller and you make your way through a game scenario that gets progressively harder. You can sometimes make decisions on where to go during the game, so that you can have a different experience the next time you play! If you can find it, I would recommend you to try Luigi’s Mansion, where you and a friend use vacuum cleaners to defeat ghosts and make your way through the mansion. 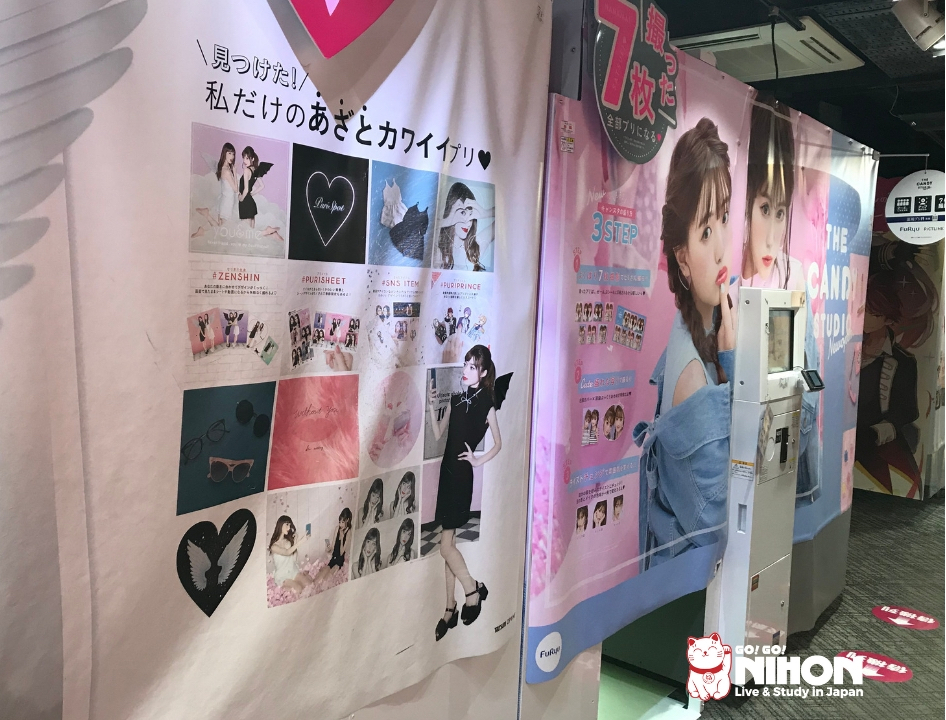 A staple feature of all game centers worth their salt, purikura (プリクラ) allow you to customize photos in fun, beautiful, and sometimes ridiculous ways. They are quite different from your usual photo booth: within, you will find a green screen background, and near the camera, a monitor will show you various poses to strike. Once the shoot is over, you’ll head over to the side of the booth, where on a big screen you will have the opportunity to customize your photos with filters, stickers, lettering, and all kinds of good stuff. At the end, you will get two sets of the edited photos, which are printed on stickers, so you can place them wherever you want!

Booths usually cost 400 yen for one shoot and give you two sheets of photos. Purikura booths usually have a theme, like fashion model, beauty makeup, idol, and so on. I even tried one where pretty anime boys cheered me and my friend as we were taking pictures! Before starting the shoot, we could pick which character we wanted, and had access to special stickers of that character when editing afterwards. Purikura is definitely worth trying at least once!

And so much more!

You will often find “medal games”, which are mostly similar to slot machines, where you use “medals” (bead-looking tokens) that you trade for money beforehand. If you win, you will get more medals, which allow you to play more or to exchange them for prizes. Other than these types of machines, you will also find many interesting things in game centers, like simulators allowing you to pretend to be driving a huge mech and fight monsters, or even train simulators, where you play the role of a train conductor.

You may notice that many games give you a chance to tap a screen with a card when you start playing. That’s because these cards allow you to save progress, keep bonus content you unlock, and keep a record of your own settings, like the sounds the game uses, the volume, and so on. Otherwise, you will sign on as a guest user, and you will only have access to the content which was unlocked on the specific machine you’re using.

There are many types of cards, but the two main ones I have seen are Konami’s e-AMUSEMENT PASS and Bandai Namco’s BANA PASSPORT. You won’t be able to use them for all games: some will ask for one, some will ask for the other. Other games may ask for an entirely different card. It mostly depends on the company that made the game. For this reason, before you get a card, I would recommend you to figure out which games are your favorite, and get the card that allows you to save progress on the most of them.

The machines where you can get those cards are less common than the money exchange machines, and usually can only be found in larger game centers, near their information counter. One card may cost you between 500-1,000 yen. When using it on a game for the first time, the game will ask you to decide on your username, and from that point on, you’re set! 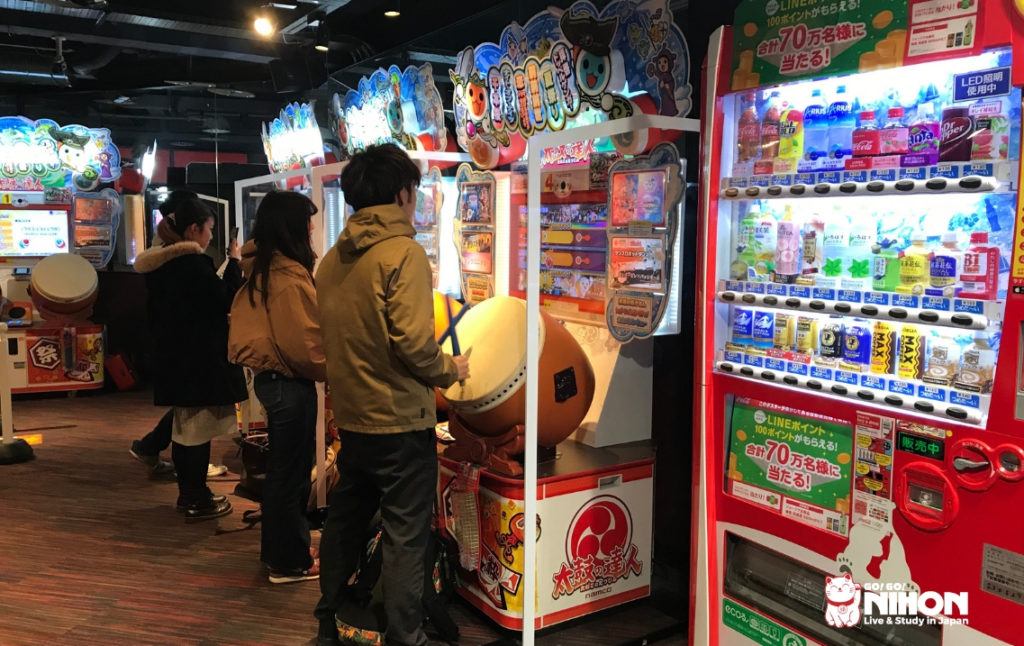 What makes them so popular?

Videogame arcades may no longer be as present as they used to be in the Western world, but since Japan tends to be a conservative country, Japanese people have maintained their love of these games. Japan still holds approximately 4,800 game centers, which are still just as popular today as they were back in the day.

For a few coins, you can play a few games and get a taste for the game or see if it’s not for you. It’s easy to get hooked though! The more you play, the more you understand how the game works and therefore, the more you win. You may find quite a few people walking away with prizes due to knowing the way things work inside out.

Another factor contributing to the popularity of Japanese arcades is the fact that the companies that produce those game machines are well-known brands such as Konami or Namco. If you are familiar with games like Tekken or Mortal Kombat, you probably already know that they were first designed for arcades, and were at first exclusive to Japan before making their way to the West on consoles. These companies also keep making new games as older ones lose their popularity, so there’s always something new to try!

Finally, one of the best things about Japanese arcades is that while you can go by yourself and have fun, it’s even better with friends! Japanese arcades have become part of the mainstream, and are therefore as closely associated to Japanese culture as shrines and temples. You can find game centers anywhere, even in smaller towns. Japanese arcades are usually open from morning until midnight, making them a great place to spend some time. From 10pm, minors are required to leave the arcade, giving other people two extra hours to enjoy it, with less demand for popular machines.

If you wish to experience these Japanese arcades for yourself, just keep an eye out for the most popular ones. Adores, Sega, and Taito Stations are all fairly common in Tokyo. You are likely to find other brands of game centers in different cities as well, but with all the crane games making them easy to spot, you shouldn’t have any trouble finding one. The harder part is keeping track of time and making sure you still have some change to buy souvenirs and experience all the other things Japanese culture has to offer!

18763
Study Trips Accommodations Advertise with us