We’ve already introduced you to the mysteries of this magnificent mountain but if you want to climb Mount Fuji then you’re going to need a little more information so that you’re ready for your trek. It’s a right of passage for locals and tourists alike and everyone from school children to old folks can be seen trotting up and down it like it’s nothing. There are some important things you need to think about though and you shouldn’t just turn up and hope for the best.

Before you get too excited there are a few things that you’ll need to know before you can start planning your trip. The first is when it’s open. Officially it’s open from around the beginning of July to the middle of September, with dates shifting slightly each year depending on the weather. You can climb it outside of these times but it’s likely to be topped with snow and will be dangerous unless you are an experienced climber. The mountain huts won’t be open outside of these times and you’re not allowed to camp on the mountain so it can be a long trek. If you do decide to travel outside of these times be sure to register your climb with the local authorities so that they know the route and timings you’re looking at and can send a search party in case anything does happen.

Then there’s the time you choose to go. Because it’s a right of passage and there are a lot of people in Japan, it’s very popular and can get crowded. If you can, go out of school holidays and on a weekday and avoid the holidays. It’ll make life a lot easier and it’ll be a lot more fun. 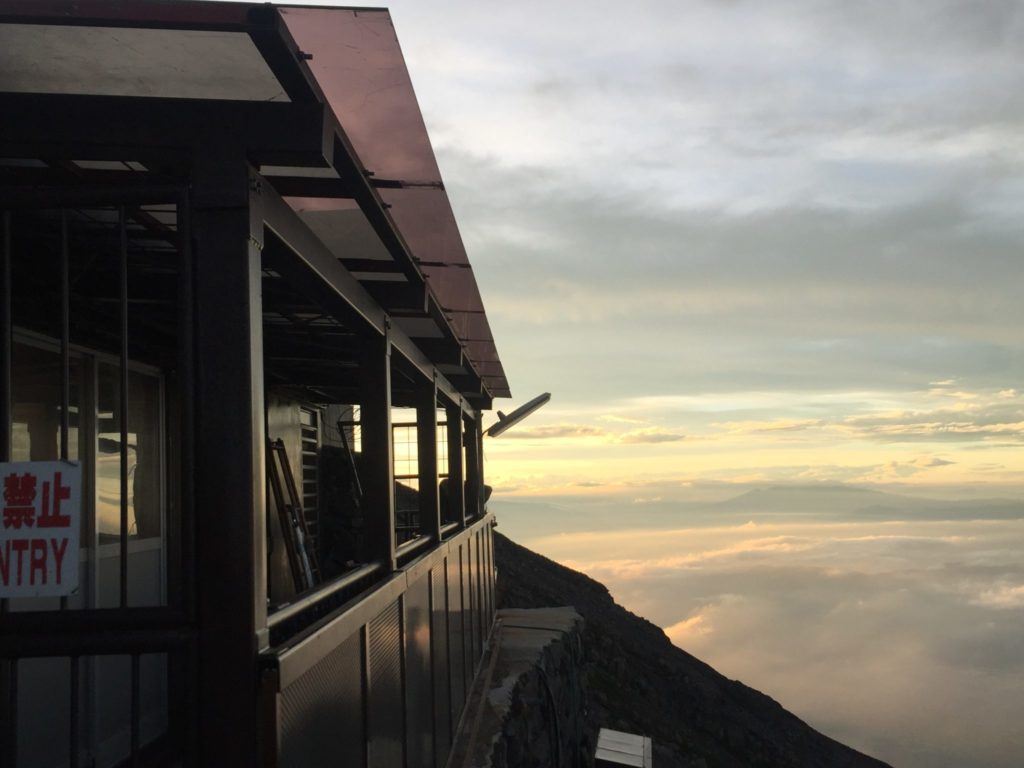 There are 4 routes that you can take up the mountain. Each have different starting points ranging from the North to the East to the South of the mountain. Most people will start at the 5th station on each route and you can get buses there from a variety of places. Do you research on each to see which is the best for you and make sure you plan your journey to and from the 5th station as well as your trip up the mountain.

This is supposedly the easier trail but by this nature also the most popular. It starts at a slightly higher altitude of 2300m and winds its way up the mountain at a lower gradient making it a bit easier. The trails for ascent and decent are different which helps ease the crowding. It does, however, have the same ascent and descent as the Subashiri trail after the 8th station. Many people have found that they’ve had to queue to the top because it’s so busy sometimes so be warned.

It has a lower starting point of 2000m but is one of the more interesting routes. The start of the trail goes through some of the only wooded areas on the volcano which can make bit more of an engaging walk. It can be a bit steeper at times though and you will have to clamber up some rocks. The ascent and descent are different again but it’s much less crowded than the Yoshida until you reach the top. The descent is worth noting as it’s down what’s described as a gravel run. This is like running down a sand dune but with a lot more big rocks on the way. It can be tricky if your legs are aching from the climb so be careful.

One of the lowest starting trails at 1450m. It takes longer but is the quietest of the trails and the ascent and descent differ about half way up. There is a gravel slope near the 8th station which can be tricky to walk through.

This has the highest starting point at 2500m. It’s also the second busiest route and has the same ascent as descent making it a bit trickier with the number of people going up and down. It’s also one of the more rockier and steeper trails. There is, however, an added bonus that if you’re really committed you can do a trek that starts on the coast to the south and leads to the 5th station where you can do the full ascent. Definitely not for the inexperienced though.

The mountain huts vary depending on which trail you have chosen. It is generally recommended that you start your climb in the evening, stay at a mountain hut as far up as you feel you can make it and then finish your climb in the morning. There are a couple of reasons for this. The first is that you’ll be able to catch the sunrise on top of Mount Fuji and it is an incredibly spectacular site. The second, more important reason is that it breaks up your climb, gives you a chance to rest and recuperate and adjust to the lower oxygen levels, reducing your chance of getting altitude sickness. Having done the hike in one go, I can promise you it’s not recommended.

Some of the huts have small food stalls in them so that you can get a hot meal to warm your bones. Even if you have decided not to stay in a hut overnight, it is worth getting a hot meal when you can. There are also toilets and of course, vending machines so you’ll be able to sort yourself out. The toilets normally cost a small fee but remember, there’s no plumbing on top of a volcano and the waste needs to be carried down so it’s quite a reasonable ask.

Booking can be a bit tricky and it does help if you can speak Japanese. There are no booking websites at the moment so you’ll need to phone. This is also where it’s useful to plan in advance as the huts can get busy. Costs range from around Y5000 to Y7000 including some meals. This site links to the lists of the mountain huts on each trail.

While everyone and their mums have climbed Mount Fuji, it’s likely to be harder than you think. It’s worth making sure you exercise regularly and have the right equipment. Altitude sickness can knock out the healthiest of people and a small slip can do a lot of damage if you fall on rocks.

We recommend the following:

The last few things you may not know about climbing Mount Fuji. There are regular vending machines including one at the top, there’s also a post box at the top and wifi. Finally, there’s a team of retired local people that trek up and down the mountain with ease (I’m sure I saw one skipping) that clear up any rubbish that naughty people leave behind, be sure to say hello and thank you if you see one. So that’s it, once you’ve packed your bag and checked the weather, you’ll be good to go.

2642
Study Trips Accommodations Advertise with us