Kansai-ben, or Kansai dialect, is probably the most well-known and common Japanese dialect. You’ll often hear it on Japanese TV comedy shows and you’ll hear it all around you if you travel to the Kansai region, which is home to places like Osaka, Kobe and Kyoto. In addition to its ubiquitousness, Kansai-ben is also great fun to learn and will help you broaden your understanding of the Japanese language.

Technically, Kansai-ben refers to a group of dialects spoken in the Kansai region. But, in popular usage, the term most commonly refers to the dialect spoken in Osaka, the largest city in Kansai.

The predecessor to Kansai-ben was spoken in cities like Kyoto and Nara and was considered the standard Japanese before Edo, currently known as Tokyo, became the political powerhouse of Japan from the 17th Century.

Since then, Kansai-ben has changed and developed as the Tokyo dialect became more commonplace. However, the Kansai region is still the second most-populated region in Japan and Kansai dialect is very widely spoken. 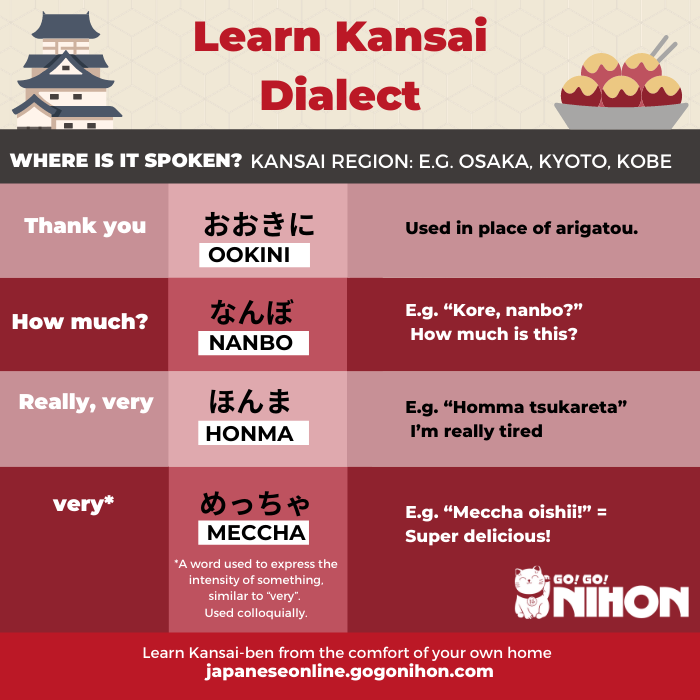 Kansai dialect is commonly described as a more casual sounding dialect. There are several differences in pitch, tone and stress of words when compared with the standard Japanese you learn at language school.

There are also many words that you only hear from those who speak Kansai-ben.

Some basic examples include:

In addition to this, many endings of sentences differ with Kansai-ben. Some examples include: 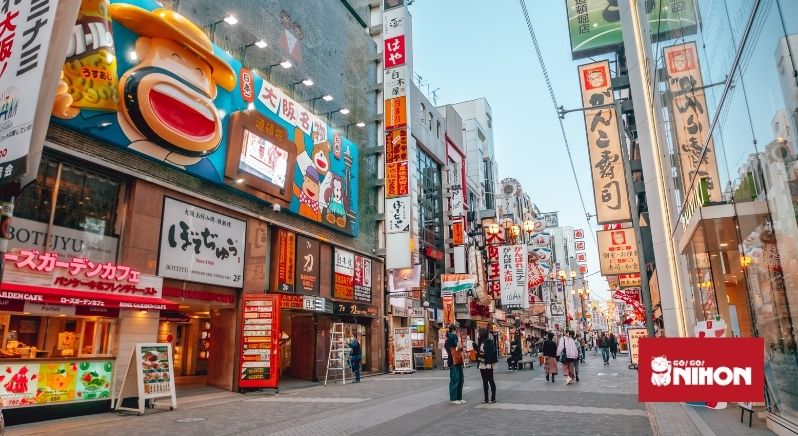 Aside from it being fun to learn, Kansai-ben is useful to learn for a few reasons, especially if you choose to live and study in the Kansai region.

You will sound more natural in conversations and less like you’re reading from a textbook. It’ll also be easier to understand what people are saying since Kansai-ben is so different from the standard Japanese you learn at school.

Kansai is also known for shaping Japanese pop culture, with many entertainers, comedians and talk-show hosts coming from the Kansai region. They use Kansai-ben in their acts, so you’ll be better able to understand what they are saying.

Not many people expect Japanese language learners to know Kansai-ben, so it’s a powerful skill that will help you make friends and create better business relationships if you end up working in the Kansai area.

How to learn Kansai-ben

The most obvious way to learn Kansai-ben is to live in Kansai and pick it up in your day-to-day life. But, that’s not always a viable option and Kansai dialect is also not something you typically learn at Japanese language school.

Therefore, we have created a Kansai-ben course together with Communica Institute in Kobe, which you can do entirely online. It’s a 7-day course, but you can complete it at your own pace and you’ll have access to all the materials for 3 months after you sign up.

It’s the most accessible and authentic way to learn Kansai-ben from the comfort of your own home. Visit our website for more information and to sign up.

Note that the course is currently only available in English.

For more articles about learning Japanese, make sure to check out our blog.

10898
Study Trips Accommodations Advertise with us