When you think of Japanese music, more often than not modern J-Pop will spring to mind as the popularity of idol groups spreads around the world. However, there’s a rich and varied history behind Japanese music and two instruments, in particular, are at the forefront of this. The Shamisen and Taiko (太鼓), drums. Taiko, in particular, have their own exciting history ranging from mythology to theatre to war.

Taiko drums were originally thought to have been brought to Japan from Korea and China around the 6th Century, during the Kofun period. They set their mark in history from there, over time embedding themselves in several parts of Japanese culture.

They became a major part of the theatrics of war, with marching troops kept in time by the beat of the drums. During the Warring States Period, in particular, it is thought that specific drum calls were used to communicate orders to troops.

As you might imagine, with the booing sounds and theatre of the instrument itself, taiko lends itself well to Japanese theatre and festivals. You will often see taiko performances at matsuri across Japan and the skill demonstrated is quite a sight to behold. Furthermore, both Kabuki and Noh feature taiko as a way to create dramatic tension and rhythm in performances.

These famous drums have even found themselves a place in Japanese mythology, which suggests taiko took a slightly different route when it came to finding their way to Japan. It’s said that the sun-goddess Amaterasu, sealed herself in a cave with anger, denying sunlight to the world. The goddess of dawn drew her out by dancing loudly on an upturned sake barrel and the rhythm lured Amaterasu out of her hiding place.

Lastly, they’ve even reached popular culture with the ‘Taiko no Tatsujin‘ machines where you can become a modern day drum master and you can see if you have what it takes to play these historical instruments. 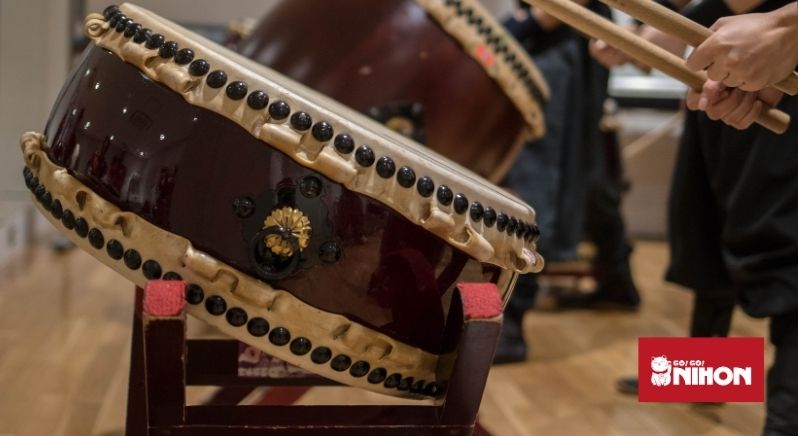 Taiko ultimately covers all Japanese drums. However, over time a variety of different drums developed in Japan with differing sizes, shapes and materials. There are a couple in particular worth noting. The nagadō-daiko (commonly called wadaiko 和太鼓, outside of Japan) and tsuzumi (鼓).

One of the most famous types of taiko is the wadaiko, with a distinctive barrel shape and leather skins at both ends. They come in a variety of sizes ranging from 30cm for the smaller ko-daiko, and up to 180cm for the ō-daiko. Heavy wooden buns are used to beat the drum, that are wider and longer than the modern drumsticks that you may be familiar with. These are known as bachi (撥). The wadaiko are most commonly seen at matsuri and village festivals.

These take an hourglass shape and are quite different to the wadaiko. The tsuzumi are more commonly used in Kabuki and Noh theatre. They too come in varying sizes but are generally smaller making them much more portable. The drummer can attach them to their body with straps or belts allowing them to move around with the drum. They also have two drum heads but these are linked with cords that can be tightened or loosened to adjust the tension. 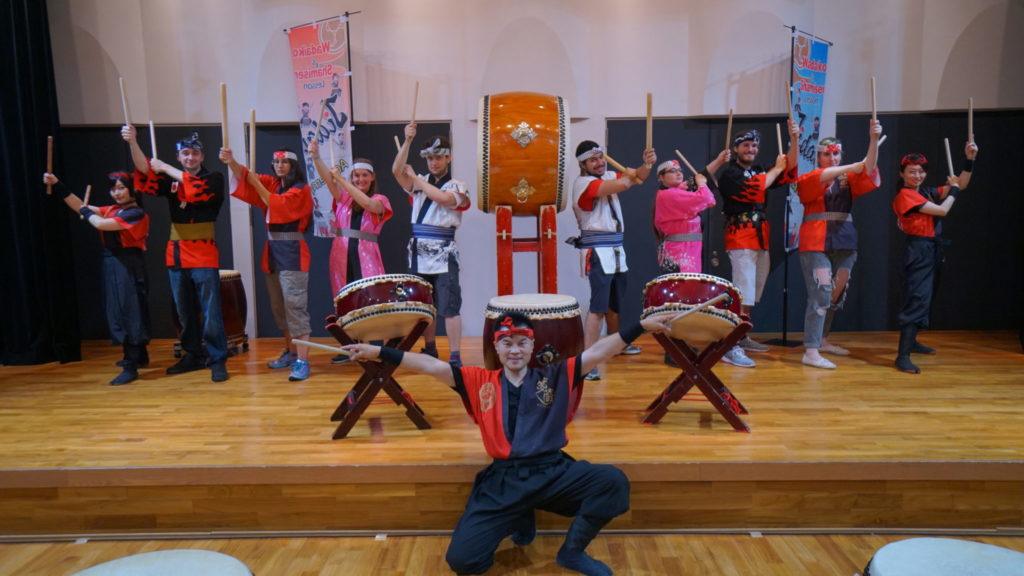 Taiko drums around the world

While these Japanese drums are a significant part of Japanese history and culture, they’ve only recently started to reach the outside world. It is probably only since around the 1950s that they have become better known around the globe.

As Japanese culture itself becomes more popular around the world, there has been a greater chance for kumidaiko (組み太鼓 drum sets), to give demonstrations of their skills. Growing out of ensemble performances from matsuri, these groups of 5-20 performers (and sometimes more) combine the traditional songs with more visual shows.  Traditional groups such as Kodò have achieved worldwide fame and regularly do tours across the globe as they bring this important part of Japanese culture to others. Even the Cirque du Soleil include taiko performance in some of their shows. Any taiko show is always invigorating and worth catching if you can. If there aren’t any big shows in your area, it may be worth checking out local Japan conventions as these will often showcase local groups and sometimes even the bigger acts like Kodò!

If taiko has grabbed your attention and you wanted to try it for yourself, we run study trips in Japan. One of the cultural activities on our Traditional Japan course gives you the chance to try out taiko drumming for yourself and be taught by a real Japanese sensei! You’ll even get to give a small performance at the end of the activity.

12841
Study Trips Accommodations Advertise with us