What could be so interesting about the randoseru? It’s just a Japanese backpack, right? It seems like a pretty standard concept. Children around the world cram them full of books and throw them over their backs after breakfast, dashing out the door to make it to school. It does its job. It’s nothing to write home about, right?

Wrong! Japan does it again! It’s not just a backpack over here. It’s the backpack: the randoseru (ランドセル). Nearly every single student on the way to school in Japan boasts this tool. The Japanese backpack has history, meaning, and sometimes a price that would make a person double, triple, and quadruple check the tag again. To understand why, let’s take a closer look.

The beginning of the Japanese backpack

Towards the end of the Edo period (Edo Jiidai, 江戸時代) and into the Meiji era (Meiji Jiidai, 明治時代), Japan began adopting western ideas. Its military being one of the first areas of transformation, soldiers began carrying Netherlands-style rucksacks. These rucksacks, or ransel, were a foot soldier’s main baggage. In 1885, Gakushuuin (学習院) proposed the use of these backpacks. Gakushuuin was (and in some ways still is) the school of schools. It was the school for the elite, the children of Japan’s nobility. In 1887, the crown prince at the time wore a backpack to this school; a backpack fashioned after a randoseru in order to honor Japan’s soldiers.

This is where it all started. Though it immediately became the fashion for those in the upper class, randoseru never rose in popularity for the people because of the cost. Up until World War II,  the furoshiki—a kind of cloth used to wrap any kind of good—and shoulder bags did the job. However, when the economy rose, students around Japan began the randoseru tradition. 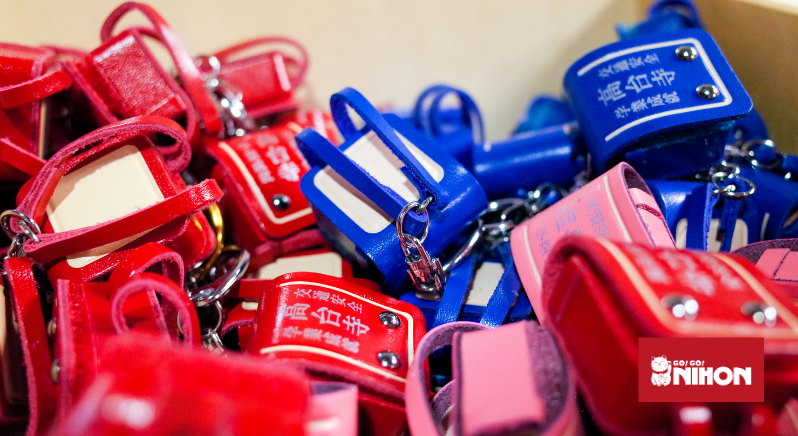 The randoseru, like many things in Japanese culture, is a nearly immutable object. It represents a carefree, innocent, and traditional childhood in Japan. It’s not just any backpack one would throw on in the western world. Nearly every single child has one here. Its traditional colors—black for boys and red for girls—and iconic shape and design are now slightly changing as times move forward, but it’s still almost completely the same. It’s in anime, tv shows, toys, and nowadays, sometimes a fashion statement for those ever ironic hipsters.

Every morning I got up to go teach when living in Tanegashima, it was all around me: every single boy and girl on the island walking to school, running through the crosswalk and politely turning around to bow to the cars as a thank you for waiting. The iconic school uniforms, the middle school baseball boys with the shaved heads, the kindergarteners with their adorable hats; this is all tradition. The clutter at the end of the day stuffing supplies into their randoseru, swinging the heavy load onto their shoulders, and finding their friends to make the trek back home; these things all help form a kind of unity and bond that brings the kids together. The tradition of these backpacks has been going on for hundreds of years, much like some of these other school traditions have most likely been going on for even longer.

It’s a very awe-inspiring thing to see. It’s a far cry from the loose western schooling I was brought up in. This isn’t an essay on which is wrong or right. It’s just an observation from somebody who had the chance to take a part in something different.

You may have heard of the surprising cost of the Japanese backpack. Ranging from approximately ¥30,000 to the ultra-luxurious brand name ¥120,000 ($300 – $1200), this is no ordinary purchase. There are, though, modestly priced randoseru ranging from ¥5000 to ¥15,000 ($50 – $150). If even that price tag sounds expensive, think about this: randoseru are expected to last a child’s entire elementary school career from 1st into 6th grade. Even then, when taken care of, these bags last far past elementary school and into adulthood. Some are passed on to the next sibling to use.

Even to this day, nearly all of these Japanese backpacks are handmade. The stitching is made to last, and the materials are strong. One can still find the traditional black and red, but in a changing world, more and more kids are finding ways to express themselves. Cowboy style randoseru, bright colors, funky materials; it’s all coming around. It only takes a walk around any Japanese town in the morning or after school to see what I’m talking about.

There should be respect and praise for using and caring for an item so long, both on the part of the student and on the Japanese manufacturers for putting so much effort into making a quality product. In an era with planned obsolescence—where items are made to break after a set amount of time so consumers spend more money to buy new things—creating a cycle of more and more waste in this fragile world—this is a welcome breath.

It took me some time to understand the concept of the Japanese backpack, and though I might not understand it fully, I don’t need to understand it fully. It’s a different culture, and that’s what seeing different cultures are about. Take a look over here if you’re curious to learn more about the Japanese education system. Japan does its own unique thing, and if you don’t know that by now, let Go! Go! Nihon show you the way!

13235
Study Trips Accommodations Advertise with us