You know you’re on your way to Japanese proficiency when you can use Japanese onomatopoeia in everyday conversations. When used correctly, they will inject colour and flair to the way you express yourself.

Read on to learn more about Japanese onomatopoeia and how you can master it.

You’ll understand this better when you look at the main categories of Japanese onomatopoeia.

These are words that describe sounds that humans and animals make.

These are words that represent sounds made by non-living objects and things in nature.

Flapping (of flag or cloth) in the wind: patapata, ぱたぱた／パタパタ

Words that describe conditions and states. These words don’t describe actual sounds made, but feelings. In this sense, they’re not the same as onomatopoeia in English. They’re also known as ideophones or mimetic words.

Be idle or laze around: gorogoro, ごろごろ／ゴロゴロ *Note: this is the same as the word used for the rumbling of thunder! How to use onomatopoeia

As you have probably noticed, Japanese onomatopoeia tend to repeat the same sound twice to produce the onomatopoeia. They are typically used as adjectives, but can also act as adverbs.

However, that’s not the only form that Japanese onomatopoeia can take.

They can also take “to”, と and/or “ri”, り forms, both of which are used mainly as adverbs.

Note that not all the onomatopoeia can take all these forms and the meaning may change depending on what form it’s in.

Japanese onomatopoeia can also use several different grammatical structures, which is why taking lessons on how to use them correctly is super important! 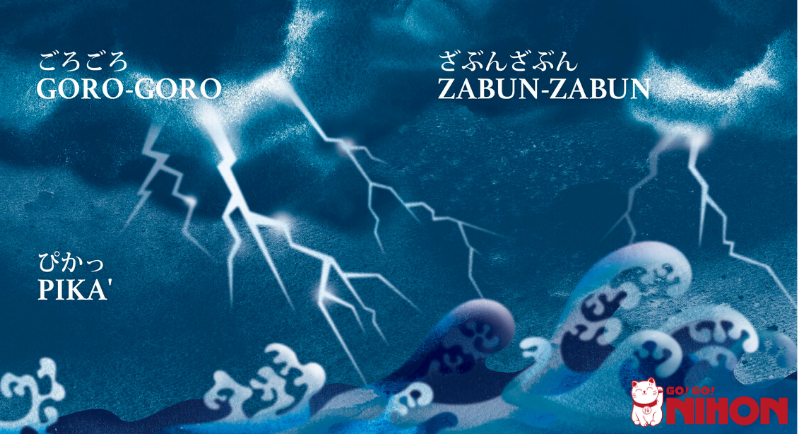 Where to learn Japanese onomatopoeia

If you’re living and studying in Japan, you will likely come across onomatopoeia through your everyday interactions and conversations with Japanese people.  Some phrases are also taught in school as you increase your Japanese conversational ability.

For those of you who want to learn more about them, we offer an online course specifically on the topic! It’s based on a book by Kinotoriko, an illustrator and author from Tokyo, who created the book to introduce the most common and useful Japanese onomatopoeia.

The course is suitable for both beginner and more advanced learners and costs just 2050 yen. For more information and to sign up, visit our website.

Aside from being a lot of fun to learn, Japanese onomatopoeia will help you sound more natural. Learners of Japanese all go through the same experience, where they have tried out some language skills on Japanese friends, only to be told that they sound like a textbook. So expanding your knowledge and knowing when and how to use it can help you sound less robotic.

You will also be able to understand other people better since onomatopoeia is used fairly frequently in spoken Japanese.

If you’re serious about upping your Japanese language level, then you’ll want to master Japanese onomatopoeia!

For more articles about learning Japanese, visit our blog.

5848
Study Trips Accommodations Advertise with us