Tattoos in Japan have a long history, winding past the forbidden image it has in present Japanese society. It’s an integral part of the country’s culture, and its unique style separates itself from western tattoos. Though it goes by many a name; bunshin (文身, patterning the body), shisei (刺青, piercing with blue), etc., its most commonly known as irezumi (入れ墨, inserting ink). Traditionally done by hand (手 彫 り tebori) and using chisels and gouges, the art of tattooing is still nowadays so looked down upon that few artists exist in comparison to the outward nature of tattoos in the Western world.

The earliest tattoos, though when exactly is debated, seem to go back thousands of years ago. In the Jomon period (around 10,500 B.C. to 300 B.C.), clay figurines were found with marks historians thought to be tattoos. Later on, Chinese records stated that Japanese males bore heavy tattoos on their faces and bodies. The meaning then shifted to mark criminals as well as those lower on the caste system, ensuring that these individuals would be easily recognized within society. Interestingly enough, firefighters of the time wore the infamous full suit of tattoos as a spiritual protection, speaking of their bravery and rebellious image.

In the Edo period (1600-1868 A.D.), the era of ukiyo-e (浮世), or “floating world,” brought about an artistic and cultural revolution. Color prints encompassing everyday life in the Edo period were made by woodblock artists. One Chinese novel in particular, known to the Japanese as Suikoden, told a tale of courage and bravery that was illustrated with heroic tattooed men. This brought about an immediate demand for the type of tattoos seen in its woodblock illustrations, and tattoos in Japan instantly became popular.

These same woodblock artists moved on to become tattoo artists, employing the same tools on people as they used on their woodblocks. This is where the famous Nara ink comes about, the popular ink still used today that exhibits the characteristic blue-green color on skin. 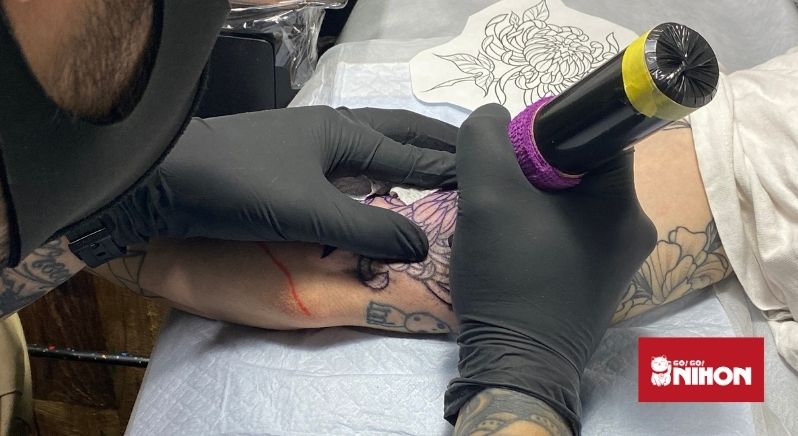 There are popular themes when it comes to tattoos in Japanese culture, many of these taking from Ukiyo-e drawings (ever hear of the Great Wave off Kanagawa?) and ever constant symbols of Japan.

The Koi fish is probably one of the most recognized and popular symbols in Japanese culture. It is an auspicious meaning of luck and good fortune, found in the shapes of food, peaceful ponds, and tattoos all over.

The dragon comes from Chinese folklore. A benevolent symbol of wisdom, it goes hand in hand with the koi, as a Chinese legend speaks of a koi that climbs a waterfall and is transformed into a dragon as a reward. This tale of willpower and strength is why on May 5th in Japan, Children’s Day is celebrated with families raising flags of carps over their households.

Peony flowers represent masculinity and courage. Cherry blossoms and chrysanthemums symbolize not giving up in times of adversity and courage in the face of death. The lotus flower, rising from murky waters to beautifully bloom, symbolizes attaining enlightenment.

Demons (鬼 oni) are a key element in Japanese folklore. With fangs, horns, and red (sometimes green or blue) skin, these supernatural beings have come to symbolize protectors, much like gargoyles in Western culture. This is why you’ll find Japanese buildings with oni-faced roof tiles (鬼瓦 onigawara) when walking around. 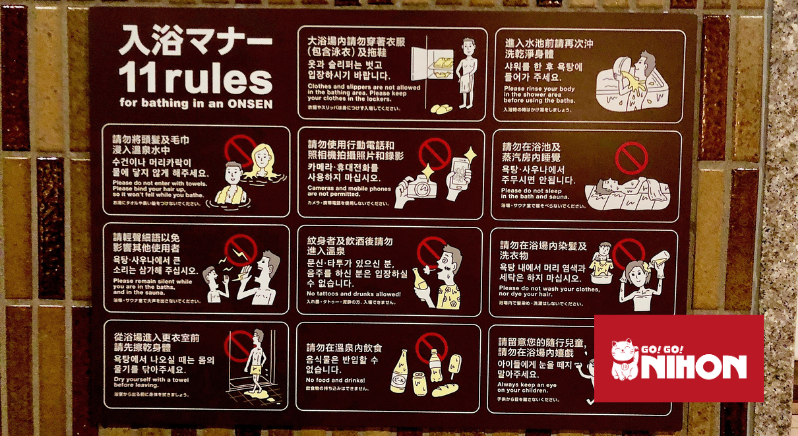 When the Meiji Restoration (1868) came about, the Japanese government sought a modern, refined culture where tattoos had no place in society. Though through post-World War II American occupation in 1948 tattoos were made legal again, the connotation of tattoos in Japan remains frowned upon.

Today, the overall image of tattoos are still associated with crime and the Yakuza. Full body suits with the characteristic rope design mean to show affiliation for Yakuza families, each having distinctive features. Funnily enough, nowadays many Yakuza choose to avoid tattoos for this very reason. It is for this reason that often gyms, pools, or onsen (温泉) refuse access to those who have tattoos, no matter the meaning (I can speak from experience on this one!). The government does seem to be trying to encourage a softer stance in light of the influx of foreigners for the 2020 Olympics, many coming from cultures where tattoos aren’t seen the same way. For those planning a trip or study abroad experience, take a look at this site, which lists places that allow for tattoos. Don’t let that put you off, though! In my experience, I met plenty of friends—Japanese and non-Japanese alike—that I sat in friendly onsens with, peaceful as the rest!

13685
Study Trips Accommodations Advertise with us