If you don’t already know it, you’ll soon realise that Japan is still a very cash-based society and it’s not unusual to carry large amounts of cash around. Soon after you’ve arrived in Japan you’ll probably find yourself wanting to withdraw some money and it may not be as simple as your home country. Don’t panic though, we’re here to guide you through the process of withdrawing money in Japan.

You’ve just moved to Japan and you need to rely on your international bank card. Unfortunately they may not be as widely accepted as you might have hoped, plus you’ll be wasting a significant amount of your money on currency exchange fees.

We recommend opening an account with Wise, previously known as Transferwise. Wise helps individuals and organisations around the world manage their money irrespective of physical borders. It offers easy money transfer, the ability to hold money in various currencies and allows you to spend money abroad through one simple-to-use debit card.

One of the best things about using Wise is their low fees and you can hold Japanese Yen in your Wise account. With their debit card, you’ll be able to hit the ground running without having to worry about accessing your money. Your money will always be converted at the real exchange rate, that is the one you see in Google so you can be sure that you’re getting the best rate possible and won’t be paying hidden markups typical through traditional banks.

You’ll also be able to use Wise to transfer any funds you need for rent, tuition fees or living expenses from your home currency into Japanese Yen.

Bank and postal accounts in Japan

If you’ve been able to set up your own Japanese account then you’ll likely have a Japanese cash card. This means you can withdraw cash at most (again not all) ATMs at banks or konbini.

Postal accounts are another option for foreigners living in Japan but these can be a little trickier. You’ll be given a booklet, similar to a bank book. Unlike with a cash or credit card, you’ll need to go into a postal branch and withdraw money over the counter. This in itself isn’t difficult but you will need to check your local branch times to make sure it’s open before heading down. Unlike konbini they aren’t open 24 hours a day and opening hours can vary from branch to branch. However, there are over 20,000 branches across the country so it can be a good place to look if you have a postal account or if you have an international card. 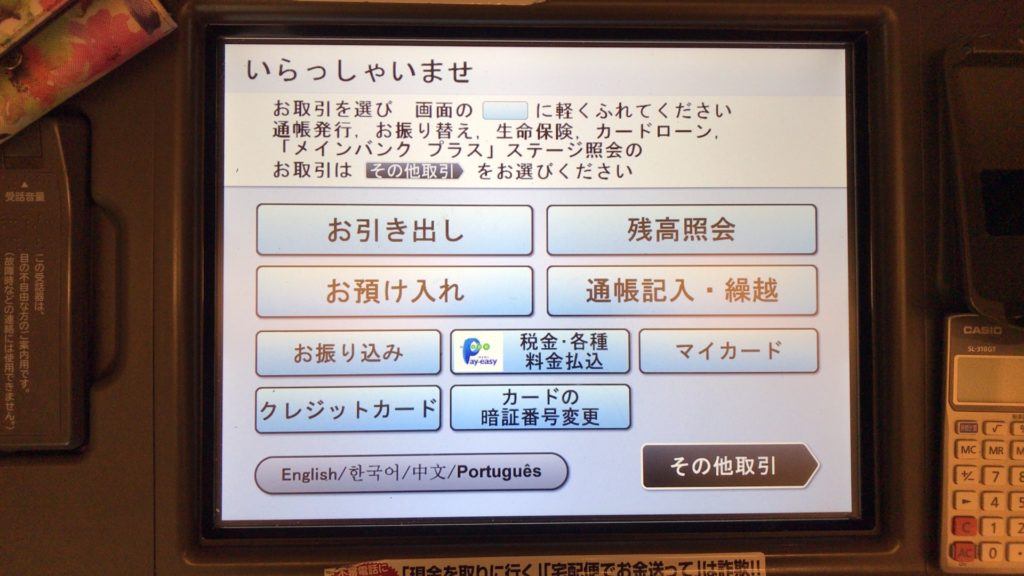 As we mentioned, there are plenty of ATMs with English language options, but there are plenty more without, so it’s worth learning to read a few key phrases to get you through your ATM interactions.

First, insert your card in the appropriate slot. Sometimes, there may be additional wider slots for savings books so be aware of this.

Next, select the option for withdrawing cash. This is called ohikidashi (お引き出し, withdraw). The other options are likely to be oazukeire (お預け入れ, deposit) and ofurikomi (お振込み), but you won’t be able to use these if you’re using an international card.

You’ll then be prompted to end your Pin code. This is known as the anshō bangō (暗証番号). Enter your 4 digits and press kakunin (確認, confirm).

Now the important part. You must now select the amount to be withdrawn. Enter the amount and press en (円, the Yen symbol) followed by the kakunin button again. At this point it’s worth remembering that ATMs in Japan will likely have a limit on them, this is normally around 50,000 yen a day. It is also likely that your card will have its own limit as well.

Last but not least, you may be offered a receipt. We would generally recommend getting a receipt for each transaction in case there are any problems in the future.

While it may be quite different to what you’re used to, it’s not all that difficult when it comes to withdrawing money in Japan. Just make sure you plan ahead and you’ll soon be on your way. There’s no need to worry.

22943
Study Trips Accommodations Advertise with us