If you’re walking around in Tokyo and your stomach suddenly growls, how about treating that hunger with some Japanese ramen? It’s savory, filling, and can literally be consumed whenever, wherever, and however you like it. Just look for the oh-so-common signboard with the characters らーめん or ラーメン which read “ramen” in hiragana and katakana respectively.

We’re heading out on an excursion in Tokyo where we’ll go through the history of Japanese ramen, how to order it and last but not least how you can crush a bowl of award-winning Japanese ramen.

The history of Japanese ramen

It’s said that the first bowl of Japanese ramen was served by Chinese immigrants in Yokohama at the end of 19th century. However, it would take a few more decades before the dish became a substantial part of the Japanese food culture. And the reason was that rice still was the first-hand choice whenever hunger struck. However, the aftermath of the second world war would change all that.

Japan was a severed nation after the war and domestic rice production staggered as a result of that. And what made matters worse was that a record low rice harvest followed shortly thereafter. This meant that both the Japanese and the stationed American troops needed something else to consume. The Americans therefore imported enormous amounts of wheat to Japan that consequently led to a change when it came to food consumption in Japan, as more bread and wheat noodles appeared throughout Japan. The very same noodles used in, that’s correct, Japanese ramen.

However, the population in Japan weren’t all happy and satisfied because of this. Issues still remained. The government’s food rations prolonged and this made way for the Yakuza to take more and more control over the food market, opening ‘illegal’ restaurants throughout Japan. Many of these being Japanese ramen shops. Now, decades later, Japanese ramen is an unmistakeable part of the Japanese culture where a ramen shop can be found literally anywhere. Just take Tokyo as an example where you can find over 10 000 ramen shops that serve a bowl of savory ramen. 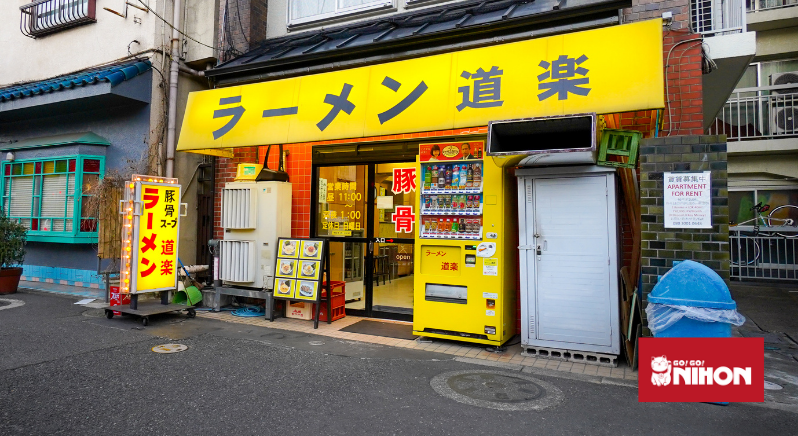 Ramen joints and the different bowls

Just like the different types of noodles, ramen offers a wide selection of flavors and varieties in Japan, and they’re mainly categorized in four groups; Miso (fermented soybeans), Shio (salt), Tonkotsu (pork marrow bones) and Shoyu (soy sauce). Each and every one with its own flavor and character.

When you order Japanese ramen most shops uses a simple ticket vending machine at the entrance, making it difficult to pay with anything other than cash. No credit cards, unfortunately. Cash is always king when it comes to ramen shops. This could be said of Japan as a whole; better keep some cash on you at all times.

The machine at the entrance usually has a wide selection of buttons where you can order everything from ramen, toppings, and beverages. The buttons sometimes have an English translation, especially in areas such as Shibuya and Harajuku where there are many tourists.

Now, if you’re still not sure what to order there is a rule that most ramen shops follow to help you with that. You see, the top left button on the machine is often reserved for that ramen shop’s very own speciality. Their forte, so to speak. Try and go with that if you’re unsure as you will most likely be positively surprised.

You’ve just made your choices and you got the tickets in your hand. Now it’s time to tailor that Japanese ramen of yours. Depending on the ramen shop they may ask you a few questions when you hand over the tickets. Sometimes you have the possibility to get a refill of noodles. Free of charge. And sometimes also the option to select lighter or thicker broth.

Here we’ll go through the most common questions they might ask and the things you can say to tailor that ramen just the way you want it.

There’s a group of people in Japan who know everything there is to know about Japanese ramen, and the shops that are on everyone’s lips right now. Go! Go! Nihon met ramen expert Hiroshi Shimakage,who has crushed over 5,000 bowls of Japanese ramen throughout the years, and is one of the founders of the ramen application ‘Ramen beast‘. He brought us on a ramen tour in eclectic Tokyo to visit two new and exciting ramen shops that offer high quality ramen. Not only does Hiroshi Shimakage eat lots and lots of ramen but he also has long experience of the Japanese ramen culture.

He says there are no specific rules when it comes to eating ramen, just eat it just the way you like it. And don’t worry if you slurp, that’s one fully acceptable way to do it too. However, he mentions there are a few pointers to think of and that is to respect waiting customers in line. Because most ramen shops are relatively small, and ramen shops need hungry customers to occupy the chairs, one should not sit too long after the meal is finished. Especially so during rush hour at lunch and dinner.

Tonight, Hiroshi Shimakage brings Go! Go! Nihon to two relatively new ramen shops: one of which received the prize of ‘rookie of the year’ 2018.

A ten-minute walk from Kichijouji station people are standing in line outside of a ramen shop. It says ‘Tombo‘ on an illuminating signboard in the dusk. This ramen restaurant serves a shio-ramen where the broth is light and salty, and the scent is without a doubt something above your average ramen. This restaurant received the ‘rookie of the year award’ 2018 for its delicious shio ramen and that pretty much explains why there are so many people in line at this hour. The longer the line, the better the ramen, they say. The noodles are perfectly cooked and the seasoning is without a doubt something special. After finishing the bowl it leaves you perfectly full and refreshed, making a second visit to Tombo a must in the near future.

The next stop for the night is the newly opened Ramen-ya ishibashi in Asagaya. This ramen shop serves a chicken broth, based on either a shio or shoyu ramen. And the chicken meat that comes with the ramen is on the verge of being a bit raw, making for a truly unique ramen experience. And did we forget to tell you the owner of the shop is quite the ramen enthusiast who will single-handedly make the visit all worth the while? A must visit if you’re into a refreshing ramen with a unique flavor and service.

The future of Japanese ramen

Japanese ramen has become a phenomenon that is not only immensely popular in Japan, but also in other parts of the world. New combinations and uses of ingredients have seen the light of day and ramen continues to evolve in different parts of the world. Whether or not these avant-garde varieties are on par with Japanese ramen is hard to say. What one can say though is that Japanese ramen offers a culinary adventure that is built upon decades of perfection and exploring. That is why studying in Japan through Go! Go! Nihon not only will improve your Japanese, but will also give you the opportunity to indulge yourself in Japanese ramen culture.

Would you like to read more about different parts of Japanese culture? Make sure to follow our blog where we cover everything you need to know about Japan!

2335
Study Trips Accommodations Advertise with us