Each language has its own way of counting things and in Japanese, there are literally hundreds of different counters. A counter is a word that describes a thing that you are counting, for example people, time, animals, and so on.

As a beginner Japanese language student, it might seem incredibly overwhelming to learn that there are so many counters, each with their own specific application. But, you’ll be glad to know that you can easily get by in day-to-day life without knowing all of them.

Read on to learn more about the counting system in Japanese and basic Japanese counters.

Basic numbers and counting in Japanese is fairly straightforward. Take a look at our chart with Japanese numbers 1 to 10, with both native Japanese, or wago 和語, and Sino-Japanese, or kango 漢語, readings.

There are a couple of points to note:

Of course, you can count much larger numbers in Japanese as well. Here are some of our tips!

One million is 100 万, so in Japanese “one million” becomes “hyaku-man”. 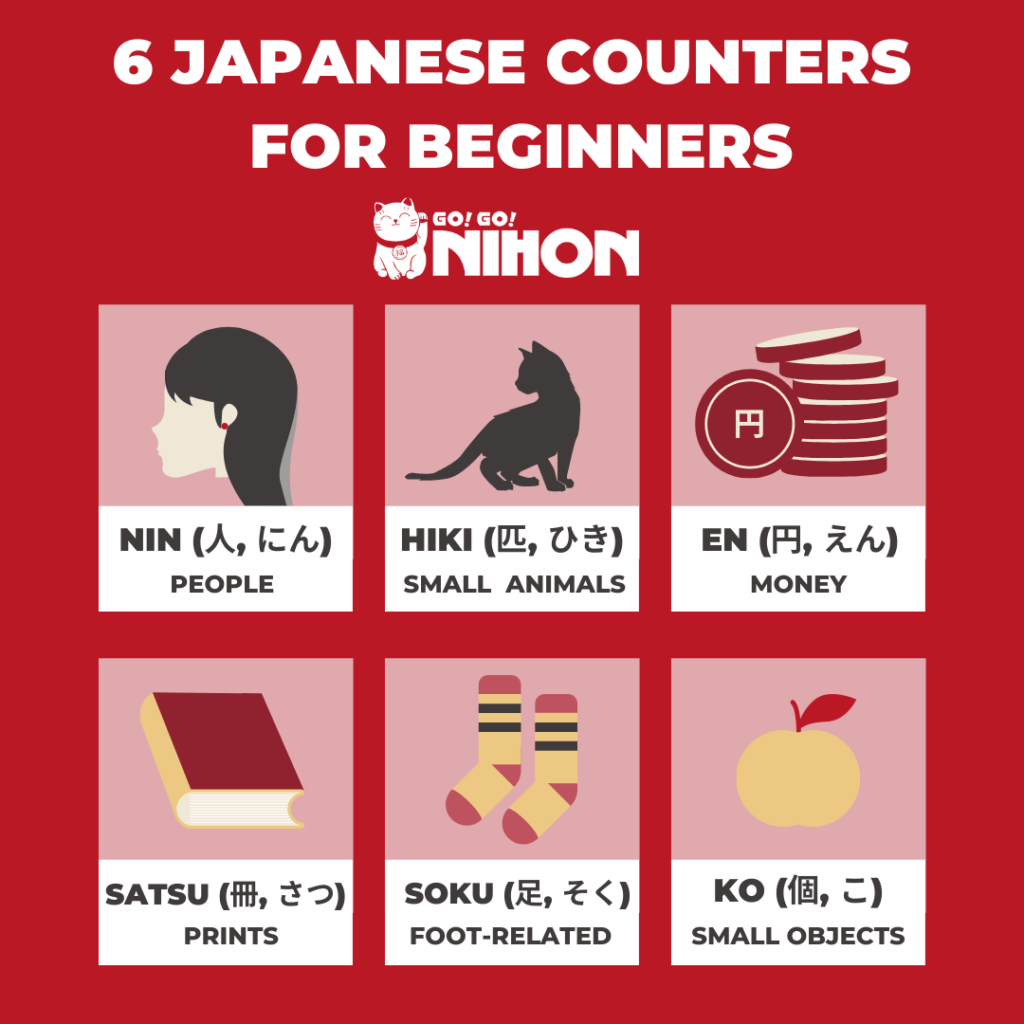 While you can get by just fine using the universal counters, knowing how to use other counters is an important part of learning Japanese. If you have been studying the language, you probably will have learnt some of these already without even realising it.

After the universal counters, 個 is probably the next most useful basic Japanese counter word. It is generally used to count small objects, such as pieces of fruit e.g.

This is the counter for people, except if there is just one person, or if there are two people. For one person, you say hitori (一人, ひとり) and for two, you say futari (二人, ふたり).

For other numbers, you just say the number plus the counter e.g.

Note that usually 四 is pronounced “yon”, but here you don’t pronounced the “n” sound. You also never say “shinin”.

This is the counter you use for small to medium size animals such as cats, dogs, fish, insects, but also monsters and made-up creatures. For larger animals, you use the counter tō (頭, とう).

This can be extremely confusing for beginners, especially because there are other words that do this as well. But trust us, it does get easier the more you practise and it will become more natural the longer you learn Japanese, especially if you spend time living in Japan.

This is the counter for money e.g.

These are counters for units of time. These include:

Note that when you get to days beyond ten, you use “nichi” e.g.

You also need to remember that the first and 20th days of the month have their own unique pronunciations:

Be careful also of the reading for the 8th day of the month, which is yōka, ようか, even though the native Japanese reading of 8 is “yattsu”.

Again, don’t worry if this is all a bit confusing. It will become easier the more you learn Japanese. Just take the time to practise it!

Note that even though the word 本 means “book” in Japanese, this is not the counter you use to count books (more on that later).

This is the counter for all things book-related: books, notepads, magazines, booklets, dictionaries and so on.

Use this counter for flat, thin objects like pieces of paper and tickets. It can also be used to count clothing like pants and shirts, as well as walls and single servings of soba.

This is used to count the frequency that something happens. In English, this would translate to “times” e.g.

You can also use it to count rotations/revolutions.

Note that 階, which is a counter for floors of a building, is also read as kai. Pay attention to the kanji and context to understand which word is being used.

The kanji for this counter means “foot” or “leg”, so we use this as a counter for pairs of shoes, slippers, socks, ice skates etc.

Of the hundreds of counters in Japanese, there are plenty that are less common in daily use, but are still very interesting to learn about.

Hira (片, ひら) – used to count small flat things that flutter such as petals and snowflakes.

Bi (尾, び) – counter for fish and crustaceans with fins or tails. Usually used by fishermen and staff at pet stores to talk about how many fish they have for sale. Not usually used by customers buying fish.

Mori (盛/盛り, もり) – used to count piles, usually of food such as a bowl of oranges, baskets of fruit, etc.

Rō (浪, ろう) – counter for the number of years someone has been studying to pass university entrance exams after they have already failed once.

And that’s some basic insight into the world of Japanese counters! If you would like to learn more about the Japanese language, why not sign up to one of our online language courses?

9614
Study Trips Accommodations Advertise with us