Long hours, unpaid overtime, traditional working culture and hierarchical structures – these are some of the things that often come to mind when people think about working in Japan. And while this may be true for many Japanese companies, it’s also far from reality for many others.

Tokyo Creative produces high quality Japan-related content for brands and government agencies. It works with some of the most well-known English-speaking influencers in Japan, including Abroad in Japan, Tokidoki Traveller, Sharmeleon and many others. We spoke with three staff from Tokyo Creative to find out what life is like for them to work in Japan as a foreigner.

Japanese: do you need to know it?

The Tokyo Creative team consists of a mix of locals and foreigners, but the working language in the office is English. So is it still necessary to be able to speak Japanese? It would save a lot of time and hassle from having to learn it if you want to work in Japan as a foreigner, right?

In short? it really depends on the company and your role, but it’s always an advantage to know the local language.

For Tokyo Creative videographer Alex, originally from Malaysia, knowing Japanese is important because much of her job involves working with Japanese clients. Her day consists of meetings, filming, editing, researching and storyboard creation. It’s important for her to be able to give directions and convey ideas in Japanese. Alex can currently speak conversational Japanese and continues to self-study the language.

Knowing Japanese is a necessity for project manager Sarah, who is from Australia. She’s part of the company’s sales team and meetings are always conducted in Japanese. Her Japanese level is currently JLPT N2 and her main job responsibilities include social media and influencer management, translation work and market research.

For Tokyo Creative Chief Technology Officer Ian, who is from the UK, Japanese is less of a requirement in his work. His role includes website development, equipment management and configuration, domain and online account management and English copy-editing.

But, he thinks that knowing Japanese can only be a positive thing if you want to work in Japan as a foreigner. Even if some industries may not require it, it’s important to be able to communicate and build relationships with Japanese co-workers. Ian previously worked for a Japanese company for six years and knows conversational Japanese.

The job interview process for all three staff was different. For Ian it was an informal lunch with the company CEO at that time and he was introduced to the company through a friend who worked there at the time as a photographer. Alex conducted her job interview for her role entirely in English and Sarah completed hers in both English and Japanese. Sarah’s application process also involved her submitting a sample project proposal in both languages.

Like anywhere else in the world, each company will have different recruitment processes and these will also depend on what role you are interviewing for. For many Japanese companies, there are specific dress protocols for interviews, as well as commonly-asked questions. 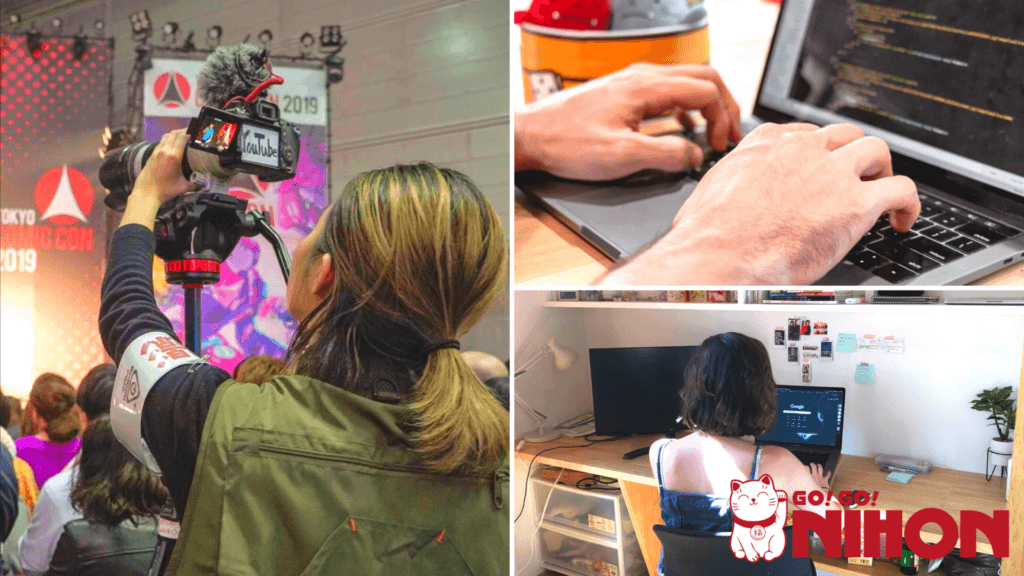 Japanese companies are notorious worldwide for their long and demanding hours. But that’s not the case at Tokyo Creative. Alex, Sarah and Ian all have regular office hours with an hour for  lunch break. Sometimes overtime is required, but it’s not a regular part of their work life and that time is always compensated with time off at a later date.

During the COVID-19 pandemic, like many Japanese companies, all Tokyo Creative staff worked remotely and their usual social gatherings like team lunches, which were held regularly, were on hold.

Advice if you want to work in Japan as a foreigner

Finally, we asked Ian, Alex and Sarah to share some advice for those who want to work in Japan.

“I think people’s image of Japan can often differ to the actual reality of living here, so I would highly recommend visiting on vacation first and using the opportunity to speak to people who already live here.”

“Knowing the language and culture would take you a step further. Allow room to learn and grow from experience each time. Having more Japanese friends definitely speeds up the process of learning.”

“Definitely work on improving your Japanese language skills to the highest level possible. Learn about Japanese business culture. If there is a Japanese company in your home country (even just a local restaurant run by Japanese people), try working with them and see if you like the work environment!

“Being bilingual is crucial and many companies require a foreigner’s perspective. Being able to communicate with the client in Japanese is a huge advantage.

“My ultimate advice is to work for an international company in Japan, with a mix of Japanese and non-Japanese staff members! This helps to reduce any potential cultural differences and I personally really enjoy this balanced environment.”

Curious about Tokyo Creative’s work? Check out their YouTube channel.

If you’re interested in learning more about life in Japan, read our blog for more insight.

2512
Study Trips Accommodations Advertise with us