Early in spring every year families with daughters celebrate Girls’ Day in Japan. It’s referred to as Hinamatsuri (雛祭り) in Japanese, which means doll festival. And for this reason it’s also known as Dolls’ Day. On March 3rd parents wish and pray for the healthy growth and happiness of their daughters. The Japanese celebrate the event by displaying traditional dolls and enjoying special dishes and desserts.

Let’s take a look at the history and customs of this Japanese seasonal celebration.

The celebration of Girls’ Day has its origins in the Heian (794-1192) tradition of hina-asobi (雛遊び), meaning doll play, where noble children played with paper dolls (雛, hina ). It is believed that the tradition of displaying dolls was a way to ward off evil spirits. In a purifying ritual, imported from China, one would transfer misfortune to a doll. Then throw it away, often in a river, to release the misfortune and bad luck. In some areas of Japan you can attend “doll floatings” where this tradition is still practised.

During the Edo Era (1603-1867) the simple paper dolls were replaced with luxurious ceramic dolls (雛人形, hina ningyou). These dolls are very popular today and you can see similar doll sets displayed in various places every Girls’ Day in Japan.

The festival was actually originally called the peach festival (桃の節句, momo no sekku). Peaches were said to be purifying and peach blossoms also bloom in March.

Traditionally the grandparents, or parents of a newborn baby girl provide a set of hina dolls. Either by buying a new set or by passing down their own set of dolls. It’s common for friends and other relatives to gift the baby girl with other dolls and accessories for their hina doll display (雛飾り, hinakazari).

There are no strict rules for Girls’ Day celebrations and therefore every family have their own traditions. Many families invite relatives and friends to celebrate the birth of a baby girl together. It is not uncommon to celebrate every year, but it’s also usual to do a bigger event on the baby’s first Girls’ Day. The parents prepare and serve traditional dishes, as well as the children’s favourite foods, to the guests. There are also games that are typical for Girls’ Day celebration. 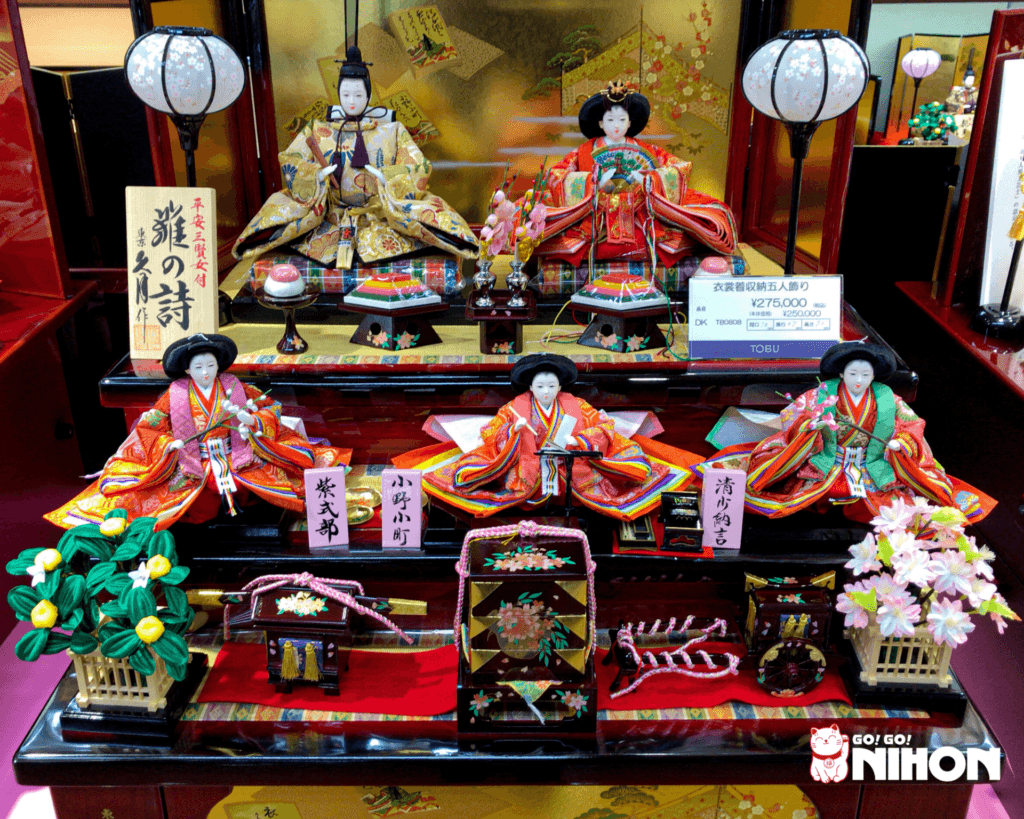 The dolls represent the emperor, empress and their court, and are usually wearing typical court clothes from the Heian Era. A simple doll set may consist of only an emperor and empress. But larger sets including court ladies, musicians, guards and ministers are also common. Accessories such as small furnitures, flower displays, carriages, lamps and folding screens might also be a part of the set.

Families often collect pieces for the hinakazari display, which means they grow the doll set every year. In hotel lobbies, shrines and other places open to the public you will often find grand doll displays. Collecting hina dolls can be very expensive! But nowadays it’s possible to find more affordable dolls, even Disney versions of hina dolls.

Some start displaying the dolls in early February, but it’s more common to set up the display just a week or a few days before March 3rd. According to tradition it is important to remove the dolls immediately after March 4th. It’s said that girls will marry late or become difficult to marry if dolls are displayed after this date. Although most Japanese don’t believe this superstition, many will still pack away the dolls quickly.

Apart from the typical dolls, some other decorations are also associated with Hinamatsuri. Because of its traditional connection with hinamatsuri, it’s common to display branches of peach blossoms. These can be either real or made of paper or silk.

Hanging ornaments (つるし雛, tsurushi-bina) are also a big part of the Girls’ Day decoration. These beautiful decorations are hand made with silk and threads. Using traditional lucky motifs that symbolise happiness and growth. Peaches, rabbits, monkeys, triangles and dolls are common.

Like most seasonal events, Girls’ Day celebrations in Japan comes with special food. Typical Girls’ Day celebration would traditionally include playing Kai-awase (貝合わせ), also know as Kai-ooi. This is a shell-matching game (kai meaning clam and awase meaning matching) played originally by nobles in the Heian Era. Similar to memory the goal is to match two, elaborately decorated halves of a clam-shell.

If you are staying in Japan during this season, there are many places open to the public that celebrate and decorate for Hinamatsuri.

In Katsuura city in Chiba Prefecture, about 2 hours from Tokyo there’s a grand Girls’ Day event held for the 20th year this year. An enormous doll display on the steps of the Tomisaki Shrine, as well as other decorations (about 30 000 hina dolls!), makes this a great place to go to experience Girls’ Day in Japan.

8399
Study Trips Accommodations Advertise with us