Japan has an excellent transport system, but the best way to get around, particularly in the hot summer months, is by bike. However, because it’s such a popular way to get around and because it’s Japan, there are a lot of bicycle rules in Japan regulating how to get a bicycle. Not as straightforward as popping down your local shop…

You’ve got three options for buying a bicycle in Japan, either at a store, online or second hand. It can vary in price from 6,000 yen to 60,000 yen. People tend to look after their bikes well in Japan so the second-hand options can be a good, reasonably priced choice. The money you’ll save on transport from having a bike will soon make up for the cost too, so it’s always a sound investment.

Registration is just as important. Bicycle rules in Japan mean you are required by law to register your new bike at the prefectural police department in your name. You’ll have a chance to do this at the store if you buy it new and it’ll cost around 500 yen. If you buy it online you’ll need to head down to your local police station (交番 koban) with proof of purchase and they’ll take you through the process. Finally, if you’ve bought it second hand, you’ll need to transfer the ownership as you would with a car. This isn’t as complex as it sounds and if you head down to your local store with a completed transfer form and the previous owner with his registration paper, the store will help you through the process for around 500 yen. 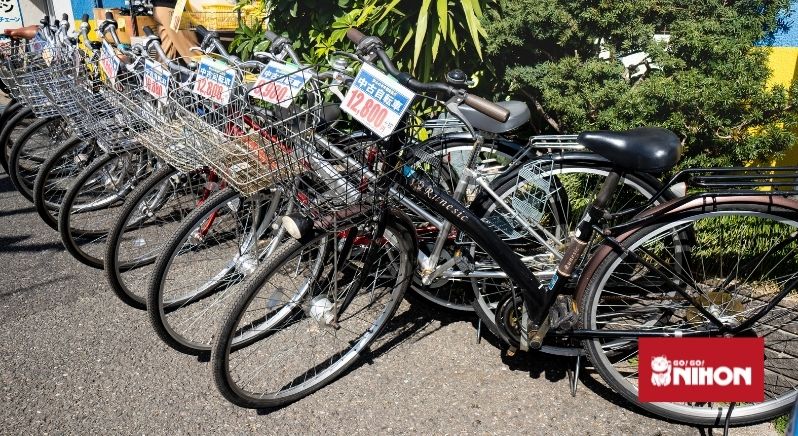 So you’ve bought your bike and you’ve got it registered, you’re ready to head out and explore the city. But wait! There are a few (read loads) of bicycle rules in Japan that you need to learn and follow. While you’ll see a lot of Japanese people breaking many of these rules, you’ve got to remember that you’re not them and you should always respect these rules.

The rules are equivalent to those for drivers so you’ve got to pay attention. The top few are below but it’s best to do a bit of research and fully understand the rules of the road. There’s this website dedicated to cycling and road rules that gives a good overview and covers the important road signs too.

1. You must cycle on the left-hand side of the road as with driving a car.

2. Riding dangerously, failing to stop at a stop light, or riding with broken brakes carries a maximum penalty of a 500,000 yen fine and/or three months in prison. As you’ll see, the fines are high and it’s really not worth the risk.

3. Biking under the influence of alcohol is forbidden and carries a maximum penalty of five years in prison and 1,000,000 yen fine. You’ll probably see the Japanese doing this but it’s not only illegal it’s pretty dangerous.

4. Cycling on sidewalks is forbidden, except where indicated by shared sidewalk signs.

5. Riding while carrying an umbrella, listening to an iPod, or talking on the phone are prohibited; violators can face a fine of up to 500,000 yen. This is one you’ll definitely see many people doing, particularly in the rainy season but it’s much better to get a poncho.

6. All bikes are required to have a bell and a headlamp. This is not only a rule but common sense, it’s smart to stay safe.

7. Riding with a passenger is also illegal apart from if they’re below the age of six. If you decide to do this the child must be in a designated child seat. The fine for double rides is up to 500,00 yen.

8. Last but not least and we’ve mentioned this before. Bicycles must be registered in the owner’s name at the prefectural police department.

It may seem like a lot but once you’ve got your bike and sorted the paperwork you’ll be on your way enjoying the streets of Japan.

11413
Study Trips Accommodations Advertise with us